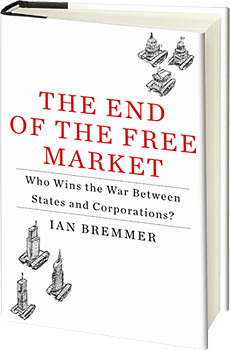 Count the books now on store shelves that “reconstruct the crimes” that triggered the global meltdown. Count the Goldman Sachs jokes on late night TV. Count the hours that C-Span will devote to congressional inquiries into what happened, why it happened, and who is ultimately to blame. Forensics is a necessary process if we’re to learn from our mistakes.

But while many are focused on the rearview mirror, the road ahead is sure to be bumpy for free market capitalism. That’s what my book is about. And though I wrote a bit about this trend in last week’s back and forth with Tom Barnett, I want to make the case here for the conflict to come.

The global economic and financial turmoil of the past two years has shifted the world’s balance of political and economic power like no event since the end of World War II. The financial crisis has hastened the transition from a G7 world, one in which key international decisions were taken almost entirely among leaders of the developed world, to a G20 model that makes room at the international bargaining table for representatives of developing countries that don’t share Western assumptions about the proper role of government in an economy.

It’s already been a tough year for the rich world. Greece has demonstrated that Europe’s weakest links can push the euro zone to the brink. Japan’s indebted and dysfunctional government is treading water. America’s real unemployment rate, the number that includes part-time workers who can’t get full-time work and those who have simply stopped looking, reached 17.1 percent in April.

As the West struggles to its feet, China is again off to the races with 11.9 percent first quarter growth. The world’s second largest economy embraced capitalism a generation ago, but it has never accepted the centrality of a capitalism driven primarily by market forces. China’s brand of capitalism is driven mainly by its government.

The collapse of European communism two decades ago made clear that governments can’t simply order up lasting economic growth. The Soviet and Warsaw Pact states failed in part because they could not deliver on promises of an ever-rising standard of living for their peoples. Most of the world’s authoritarians have accepted that they have to embrace capitalism. But they know that if they leave it entirely to market forces to determine who wins and who loses from market activity, they risk enriching those who might use their new wealth to challenge the state’s political legitimacy.

To determine how (and for whom) wealth is generated, authoritarians have invented various forms of state capitalism. Inside China, Russia, and other authoritarian countries, the state now dominates entire economic sectors. They use state-owned and privately owned national champion companies to intervene in global markets for energy, aviation, shipping, power generation, arms production, telecommunications, metals, minerals, petrochem­icals, and other industries. They finance state capitalism with the help of sovereign wealth funds. Their purpose is to use the power of markets to create wealth that can be directed as political officials see fit. The ultimate motive is not economic (maximizing growth) but political (maximizing the state’s power and the leadership’s chances of survival).

For decades, multinational companies have relied on access to labor, consumers and capital to power global growth. That’s a central component of the various processes we know as globalization. But state capitalism, made more attractive for would-be imitators by China’s robust recovery from the global slowdown, undermines this access in several ways. Western companies and investors operating inside China, Russia and other state capitalist countries are discovering that once their domestic competitors develop the technical, management, and marketing expertise to begin to compete with outsiders, governments can use a variety of legal and administrative tools to favor the locals. Assumptions about openness to foreign investment in these countries must be continually revisited.

In addition, multinational companies operating in Africa, Latin America and throughout the developing world now find themselves competing on an unprecedented scale with Chinese and other state-owned companies armed with substantial material and political support from their governments.

Adding to the problem, many of these state-owned companies and investment funds are as opaque and inefficient as the state bureaucracies to which they ultimately answer. This inefficiency — and the fact that political motives often trump economic objectives in their decision-making — will lower the long-term trajectory of global growth.

Assigning blame for what went wrong in Western financial markets is important. But we had better hope that someone is watching the road ahead.
Ian Bremmer is president of Eurasia Group and author of The End of the Free Market: Who Wins the War Between States and Corporations? (Portfolio, May 2010)