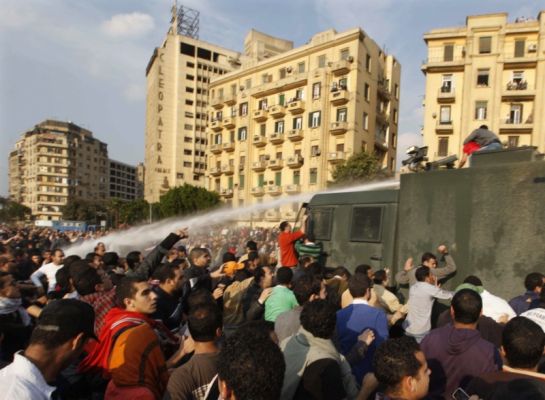 Update:  Days of unrest and protests forced a temporary suspension of trading in Egypt’s stock market on Thursday, as the nation’s index EGX30 hit its lowest level

Demonstrators in Egypt have torched a police post in the eastern city of Suez, where violence between police and protesters has racheted up amid a security crackdown. Police fled the post before protesters used petrol bombs to set it on fire Thursday morning, witnesses told the Reuters news agency.

Police in Suez responded to other demonstrators by firing rubber-coated bullets, water cannons and teargas. Dozens of protersters gathered in front of a second police post later in the morning, demanding the release of relatives who were detained during a wave of unprecedented protests that authorities have failed to quell since they began on Tuesday. Meanwhile, activists calling for the outser of Hosni Mubarak, who has served as Egypt’s president for 30 years, clashed with police in the capital, Cairo, in the early hours of Thursday. While the situation had calmed later in the morning, the protests are likely to gather momentum with the arrival of Mohamed ElBaradei, the Nobel Peace Prize-winning former head of the United Nations’ nuclear watchdog, and a potential presidential rival to Mubarak.

Responding to a reporter’s question as he departed Vienna for Cairo, ElBaradei said on Thursday that he was ready to “lead the transition” in Egypt if asked. “If people, in particularly young people, if they want me to lead the transition I will not let them down,” ElBaradei told journalists at Vienna airport. But ElBaradei added: “My priority right now is to see a new Egypt and to see a new Egypt through peaceful transition.”

Demonstraters were planning another major protest for Friday, a day often used for protest in Egypt, and the Muslim Brotherhood – the country’s technically banned but largest opposition movement – said on Thursday for the first time that it would participate.

Mubarak’s whereabouts questioned Rumours that Mubarak’s son, Gamal, had fled the country have swirled in Egypt since Tuesday, the “day of anger” that ignited the protests. But Al Jazeera’s Dan Nolan, reporting from Cairo, said that Gamal remained in Cairo and was attending a meeting of the ruling National Democratic Party.

Footage from that meeting were to be broadcast on television later on Thursday. Our correspondent said the protesters seemed determined and continued to gather at various locations, despite the crackdown. Protesters have constantly regrouped, using Facebook and Twitter to galvanise and co-ordinate their demonstrations.

Calls for another big protest on Friday gathered 24,000 Facebook supporters within hours of being posted. The Muslim Brotherhood’s promise to join the protest means that police are likely to crack down harder. Web activists seem to have acted largely independently of more organised opposition movements, including the Brotherhood, which boasts the biggest grassroots network in the country through its social and charity projects.

There have been reports of blocked Internet access and mobile service interruptions in an apparent government move to thwart protesters from communicating among themselves. Twitter on Wednesday said its service had been blocked in Egypt. But Al Jazeera’s Nolan reported that the site was up and running on Thursday. Jillian York, who oversees the Herdict web monitoring service at Harvard University, said that Egyptian Facebook users confirmed to her that the website was blocked.

Facebook, however, said it had not recorded “major changes” in traffic from Egypt. Defiant protesters Our correspondent said the protesters seemed determined and continued to gather at various locations, despite the crackdown. Protesters have constantly regrouped, using Facebook and Twitter to galvanise and co-ordinate their demonstrations.

US response Washington, which views Mubarak as a vital ally and bulwark of Middle Eastern peace, has called for calm and urged Egypt to make reforms to meet the protesters’ demands. “We believe strongly that the Egyptian government has an important opportunity at this moment in time to implement political, economic and social reforms to respond to the legitimate needs and interests of the Egyptian people,” Hillary Clinton, US secretary of state, said.

Al Jazeera’s Patty Culhane said that the US must strike a delicate balance. “Egypt is by far one of the biggest beneficiaries of US foreign aid when it comes to military financing,” our Washington DC correspondent said, adding that Egypt received $1.3bn a year from the US, second only to Israel in that respect. “It would seem then, that the US has some leverage to push the Egyptian government to not crackdown on the protesters,” Culhane said. Whether the US choses to exercise that leverage remains to be seen.

Like Tunisians, Egyptians complain about surging prices, lack of jobs, and authoritarian rulers who have relied on heavy-handed security to keep dissenting voices quiet. Egypt’s population of about 80 million is growing by 2 per cent a year. Two thirds of the population is under 30, and that age group accounts for 90 per cent of the jobless. About 40 per cent live on less than $2 a day, and a third are illiterate.

A presidential election is due in September. Egyptians assume that the 82-year-old Mubarak plans either to remain in control or hand power to his son. Father and son both deny that Gamal, 47, is being groomed for the job.