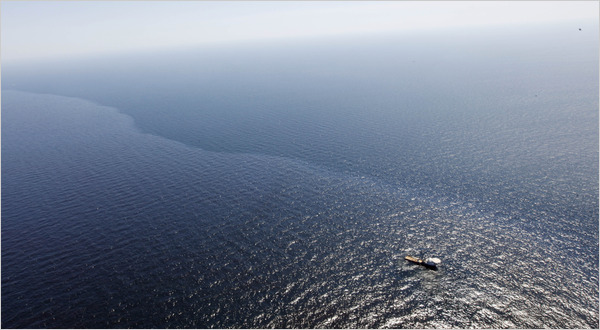 OIL continued to pour into the Gulf of Mexico on Monday as the authorities waited to see if the quickest possible method of stopping the leaks would bring an end to what was threatening to become an environmental disaster.

Remote-controlled robots operating 5,000 feet under the ocean’s surface were more than a full day into efforts to seal off the oil well, which has been belching crude through leaks in a pipe at the rate of 42,000 gallons a day. The leaks were found on Saturday, days after an oil rig to which the pipe was attached exploded, caught on fire and sank in the gulf about 50 miles from the Louisiana coast.

The robots were trying to activate a device known as a blowout preventer, a 450-ton valve at the wellhead that is designed to shut off a well in the event of a sudden pressure release.

Officials had initially said that the operation, which began Sunday morning, would take 24 to 36 hours. But on Monday a Coast Guard spokesman said officials would keep trying as long as the efforts were feasible because “it’s the best option.” The other options — collecting the oil in a dome and routing it to the surface or drilling one or more relief wells — would take weeks or even several months to execute.

Wind has kept the spill from moving toward the coast. Officials said the spill had a 600-mile circumference Monday, but most of that was a thin sheen of oil-water mix. Only 3 percent of the area was crude oil with a “pudding-like” consistency, they said.

The wind was expected to change direction by Thursday, however, and the spill’s distance from the coast has not prevented a threat to marine life.

On Sunday a crew from the United States Fish and Wildlife Service spotted three sperm whales in the vicinity of the spill. Planes that were dropping chemicals to break down the oil were told to steer clear of the whales. 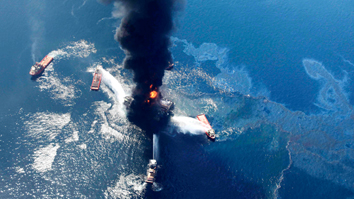 The chemicals, known as dispersants, can be as toxic to mammals as the oil itself, said Jackie Savitz, a marine biologist with a background in toxicity with Oceana, a Washington nonprofit group that focuses on ocean conservation.

Ms. Savitz said environmental concerns were not alleviated by assurances that the spill was not yet a threat to the coast. “There is a misconception that if water doesn’t hit the beach it isn’t dangerous,” she said.

Plans are moving forward to design a dome that could be submerged over the leaks, which are coming from a 5,000-foot pipe called a riser that ran between the wellhead and the rig. The riser is now snaking along the ocean bottom.

The dome would corral the oil and route it up to vessels to be collected. But Doug Suttles, the chief operating officer for exploration and production at BP, which was leasing the rig from Transocean and is required by law to pay for the cleanup, continued to emphasize the engineering challenges of such an operation at a news conference on Monday.

“I must stress that this is state of the art,” Mr. Suttles said, adding that the method had never been done at such depths. It would take at least two weeks to put into place, he said.

More than 1,000 people are working on the spill, including officials from the Coast Guard, the federal government and BP. BP is also mobilizing rigs that would drill one or more deep wells nearby to push mud and concrete into the gushing cavity, an operation made all the more expensive and complex in the deep waters. That would take two to three months.

The explosion and leaking of oil have underscored the risks and challenges that a new generation of oil pioneers faces plying for discoveries at such depths.

While the causes of the accident on BP’s rig, called Deepwater Horizon, may take months to determine, drilling down 10,000 feet or more is inherently risky because of the extreme heat and pressure at those depths.

Holding down the pressure while drilling is one trick, and keeping the equipment from softening or bending is another, requiring engineers to develop extra thick steel, alloys and heavy insulation for the job.

“At these water depths and well depths, there is more that can go wrong,” said Neal Dingmann, an analyst covering offshore drilling and service companies at Wunderlich Securities in Houston. “You have much higher pressures and temperatures to battle.”

BP and Transocean officials said the pressure that was building in the oil and gas reserve that the rig was drilling was not exceptional. But pressure was probably a factor if the accident was caused by a well blowout, as many experts suspect.

Oil companies have been drilling in deep waters for nearly 20 years, but it has become more popular over the last decade as rising oil prices made the practice more economical. Only 15 years ago, oil experts said gulf production was in a deep decline and oil companies were abandoning the area for Russia and the Caspian Sea.

The gulf is now the source of a quarter of the nation’s domestic production, and that share is likely to grow, especially with production in Alaska falling.

Until last week’s accident, the industry has had few recent spills in the Gulf of Mexico. Amy Myers Jaffe, an energy expert at Rice University, noted that in the last 15 years there was not a single spill of over 1,000 barrels among the 4,000 active platforms off the shores of the United States.

Ms. Jaffe said offshore drilling was considerably safer for the environment than the tankers used for importing oil.

“In all drilling you have the challenge of dealing with pressurization, and in the case of deepwater Gulf of Mexico that process is assisted by tens of thousands of super computers,” she said. “It’s as technically challenging as space travel, but safer.”

The question of safety may now become a political flashpoint, since the Obama administration announced recently that it wants to open more areas to offshore drilling.

On Monday, Senator Bill Nelson, Democrat of Florida, and New Jersey’s two Democratic senators, Frank R. Lautenberg and Robert Menendez, sent a letter to the chairmen and ranking members of the Commerce, Science and Transportation Committee and the Energy and Natural Resources Committee to request a hearing on the accident, which left 11 workers missing and presumed dead.

“The explosion, ensuing fire, and continuing spill raise serious concerns about the industry’s claims that their operations and technology are safe enough to put rigs in areas that are environmentally sensitive or are critical to tourism or fishing industries,” the letter said.