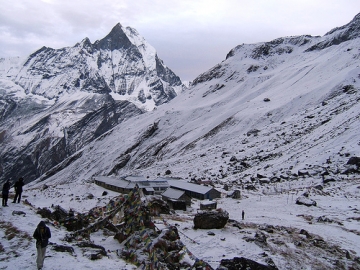 A Spaniard and a South Korean are vying to become the first woman to conquer the world’s 14 highest mountains.

In 1986, Italy’s Reinhold Messner became the first person to climb the world’s 14 highest mountain peaks. Now, two women in Europe are battling it out to become the first woman ever to achieve the amazing feat.

As reported in Britain’s The Times, Spanish climber Edurne Pasaban scaled her 13th peak, the notoriously dangerous Mount Annapurna on Saturday. The 36-year-old from Northern Spain now has to travel to Tibet and begin her ascent of Shisha Pangma as soon as possible if she wants to be in with a chance of winning the race.

Her rival, Oh Eun Sun, from South Korea is already on her 14th mountain, currently acclimatizing at Base Camp Two of Annapurna and is expected to make a push for the summit this weekend. The 44-year-old is said to be in the lead but the race hangs in the balance due to the adverse conditions that could hit either climber at any time, including avalanches, equipment failure or health problems.

With the huge pressure of the task ahead, it’s good to know that even the most competitive of athletes can put their sport to one side, even if it is momentarily. Pasaban, who runs a restaurant in Spain invited her rival to tea at Base Camp recently and wrote on her website: “It was a very pleasant chat … we laughed a little. It was good,” she said, with a cheerful tone.

Let’s hope both women make their way up those mountains safely and make history in the process.

A South Korean mountaineer made history in the Himalayas on Tuesday by becoming the first woman to scale the world’s 14 highest mountains, beating a Spanish rival for the record.

Oh Eun-sun, 44, crawled on all fours for the final, steep stretch to the peak of Annapurna, her feat broadcast live in South Korea by KBS television.

At the top, she pulled out a South Korean flag, waved, and then wept before throwing up her arms and shouting: “Victory!”