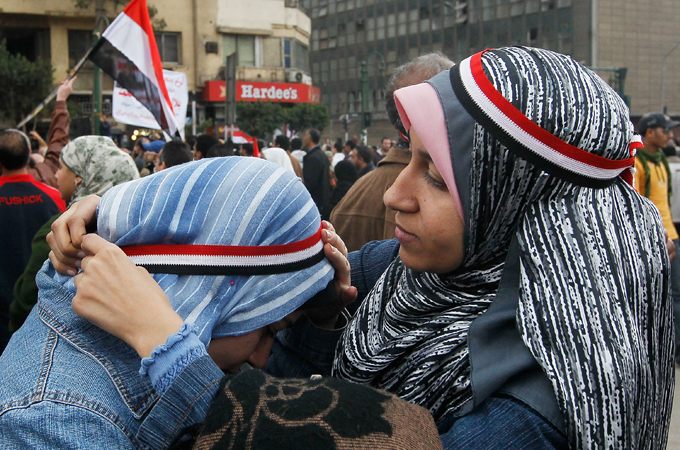 Are the Arab uprisings a boon for women’s rights? Though they’ve helped topple regimes across the Arab world, women now must struggle for a role in the new system of power.

From Tunisia and Egypt to Yemen and even Libya, women have been right in the middle of the “Arab Spring” revolutions. Lawyers, bloggers and mothers, with or without a veil, have taken to the streets in their masses to challenge authoritarian regimes.

Some of these women have turned into icons of the movement, like Salwa Bugaighis, a 44-year-old lawyer and human rights activist who joined the Libyan National Transitional Council, and Egypt’s 25-year-old Mona Seif and 24-year-old Gigi Ibrahim, with their tweets of events on Tahrir square.

In Tunisia, it was a 23-year-old woman, Maha Issaoui, leader of the Karama, or dignity, group, who first posted videos on Facebook of protests in Sidi Bouzid that eventually helped lead to the fall of Zine al-Abidine Ben Ali. On April 20, during French Foreign Minister Alain Juppe’s visit to Tunis, Issaoui presented her plan to develop microcredit loans to help the unemployed youth.

“For boys and girls, freedom tastes the same, but it is even better for us!” says Aiea Buzgheiba, 18-year-old co-founder of Mokhtar’s Nieces, a Benghazi group named after the hero of the struggle against the Italian colonial rulers. “We want to show the role women played in this revolution, and will continue playing,” says Fatma Mohamed, who is 19. Boys repaint the group’s offices. They bring water to the girls during protests. They are serving women, going against century-old traditions. In Benghazi, the hotbed of dissent, young women took over when the men left to fight Gaddafi’s forces. They are creating associations, organizing protests, and writing blogs.

In Egypt, the end of the fairy tale

But things don’t always turn out well. In Egypt, the post-revolution era is definitely male-dominated. Women who were at the forefront of the Tahrir square uprising, a symbol of equality between sexes, now barely have a say in the transition toward parliamentary elections in September. Out of the 27 ministers in Prime Minister Essam Sharaf’s government, only one is a woman. And as for the governors, who also number 27, not one is female, despite a recent reshuffle in answer to street protests.

This imbalance is also true for the committee in charge of writing amendments to the Mubarak-era constitution. “Women participated massively in the revolution, but it didn’t have any immediate impact on their place in society,” says Dina Gamil, a left-wing activist. “The only positive aspect is that they experienced protests, and they now know their strength. I think they’ll get into politics. If that’s the case, new parties will have to take their rights into account.”

For Egyptian women, the fairy tale came to an end on a symbolic day, March 8, international women’s day. The march organized for women on Tahrir square came face to face with a group of counter-protesters, mostly Salafists chanting: “The people want to get rid of women”, a play on the main revolution slogan “The people want to get rid of the regime.” In the crowd several women were hurt despite being protected by men.

In Tunisia, where a woman’s place in society remains the most enviable of the Arab world, the transition period is still dominated by men. Only two ministers are women, for health and women’s affairs, out of 23 members of the provisional transitional government led by Cid Beji Essebsi. Their role in party leadership is also minimal. Among the 51 party leaders, there’s only one woman: Maya Jribi, a biologist and President of the Progressive Democratic Party (PDP).

“It is true for the transition period, but it won’t be once the Constitutional Assembly is elected,” says Sanaa Ben Achour, President of the Tunisian Democratic Women’s Association (ATFD) who will run in the coming elections. The High Office for Revolution Goals, created to prepare the July 24 Constitutional elections, voted for gender equality on ballots, a first in the Arab world.

But many are worried by the growing influence of Islamists, even though the main party, Ennahda, which was banned under Ben Ali, approved mixed ballots and supports “gender equality” in public. “It’s hard for women right now.  Every day I’m afraid the Islamists will impose wearing the veil,” sighs Maha Issaoui. On April 1, the Tunisian government allowed the veil on ID pictures and for the first time, under the pressure of minority Salafist groups, women wearing the niqab came out in Tunis’ medina.

In reaction, a Women’s Manifesto was published on April 20.  Signed by the Tunisian Women’s Association for Research and Development, the Collectif 95 Maghreb-Egalité and the women’s chapter of the Tunisian Human Rights League, the manifesto calls out against: “voices that are threatening women’s rights because of religious or cultural factors.” In Tunisia, before fighting for new rights, women have to fight to keep those they already have.

For Esraa Abdel Fattah, one of the Egyptian revolution leaders, changing mentalities will take some time. She says: “First, we’ll have to fight for new parties to include women’s demands in their programs. Then we’ll have to mobilize the media and NGOs.” Sina Gamil agrees: “People have been conditioned intellectually, psychologically and religiously to discriminate against women. To change this will be a lot harder than getting rid of Mubarak.”

As for Yemeni women, they still feel the weight of tribal practices, poverty and religious traditions. A law to protect children against forced marriages has been in the works for more than a year. In this debate, women are split between the traditionalists and the modernists. The Constitution doesn’t have any discriminating clause against women, but they are discriminated against by customary law and by their limited access to education, which itself also hinders many from knowing their rights.

The important role women are playing in the “revolution” taking place in Sanaa is a surprise to many. And this could suddenly undermine traditions that go back centuries — just like in the rest of the Arab world.