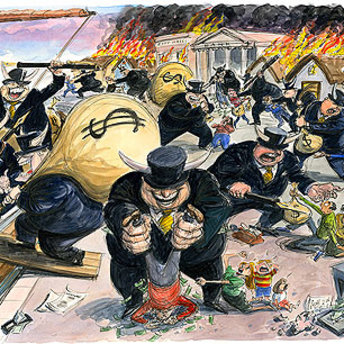 American Banking News investigates the reason for the recent massive surge in financial stocks, to a big extent predicated by the government’s desire to push Citi stock price over the $5 critical threshold “participation” barrier. As ABN notes: “The reason behind wanting the share price to go beyond $5 is in relationship to institutional investors, who in many cases are prohibited from investing in any stock under $5 a share. For example, pension funds and mutual funds are some of those I’m referring to here.” Nothing surprising there. However, the scathing critique that follows, based on nothing but the truth and exposing the government’s endless stock market manipulation gimmicks, deserves a broader audience.

Now you know why the U.S. government voted all its shares at the annual meeting to encourage there to be a reverse stock split; they would then sell a large stake in the company, which they would then publicize as making even more money on behalf of the “taxpayers.”
It’s incredible to me to see the U.S. government take taxpayer money, use it absolutely to not allow this giant bank to fail, then turn around after bailing it out and putting a huge portion of what Citigroup owes them in common shares of the company, then manipulating their position in the company in an effort to inflate the share price of Citigroup in order to make a huge profit.

This is the new, crazy world of government interference in the markets (at this level) as they can literally manipulate it any way they choose once they gain access to it.

Now you know why they have all those former bankers on their staffs; you can be sure they’re guiding them along the way.

It also makes you question the way the focus has come on Goldman Sachs (NYSE:GS) by the government, even as they have numerous former Goldman Sachs executives as part of their decision-making process.

Is it a scripted play being offered to the public with both parties writing the screenplay?

As far as the push behind the $5 a share push, it seems the government is extremely committed to making it happen one way or the other before making significant sales of their shares in Citigroup. It’s just too good of a public relations coup to pass up, and because Citigroup has struggled to obtain the $5 a share mark, it seems the government is working hard to get a reverse stock split as the other option to get it going quickly in order to boast of their great management of the taxpayer funds.

If institutional investors start putting funds into the stock once it achieves the $5 mark, there could be a nice upwards move over the year which would allow the government to boast over and over again how wisely they’re divesting of the shares they own in Citigroup. It seems they’re willing to go to any length to accomplish that task, at least without the general public understanding what’s really happening.

The problem with Citi is that it still has a insolvent balance sheet that consists to a big part of non-performing assets, delinquent loans, properties not being foreclosed on and thus not generating any cash flow, and other stuff that as others have pointe dout, would give “junk a bad name.” Yet what the government is implicitly doing is it is forcing mutual and pension fund money (your retirement capital) to invest in a company which no matter how far of a disconnect from reality its stock price is, is still a hodge podge aggregation of worthless assets. Period. Even Goldman, without doubt a party to the government’s charades, could find nothing favorable to say about the company yesterday. Still, the run from $3 to $5 in a month has been exclusively driven by forced short covering as we have reported throughout.

There is no efficient market any longer, there is no market period, that does not at its core have pure welath-transfer manipulation as the primary driving purpose. Citi’s existence for a few more years (at best) is merely taking shareholder money and using it to pay for salaries and bonuses of the “managers” of these assets. They already failed once. They will fail again. But at least your restirement money will be used to compensate them just a little longer.

Trade this market if you must. Just know full well that it is about as much integrity as the 3 card monte games played at the cafe of the central Moscow Politbureau. And every day that the administration is in charge makes it worse. The Dodd bill will be the nail that will seal the fate of the American decline into irrelevancy, as the cannibalism between the big financials takes on a brand new meaning, funded all the while the indebtedness of future generations of Americans. Assuming such exist in the first place.