What a world! Much of North Africa remains roiled with mass protests against autocratic or crazed leaders. 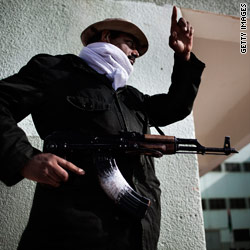 One predictable result has been skyrocketing oil prices with potentially adverse consequences for recovering economies. And, in the United States, a possible shutdown of government looms because America’s two political parties prefer to indulge in a game of “chicken” a la Washington not Kiev.

These events have been triggered by three, not four, horsemen of a future apocalypse that may be closer than we think. These horsemen arise from the question of what are the greatest dangers and challenges facing most countries. The answers aren’t global climate change, terrorism, natural or man-made disasters and economic crises however much impact each can have.

The simple reality, hidden in sight, is that bad or lack of governance constitutes the first horseman and the greatest threat to mankind. The second horseman is the threat of mass disruption that replaces the fear of mass destruction, when hydrogen bombs could have eviscerated the planet as we knew it. The last horseman is that states and international bodies are simply not organized to deal with these harbingers of danger.

The budget impasse in the United States, compounded with debt and deficit nightmares carried down to most of the 50 states, reflects one of many failures of governance. The reason is sad and clear: U.S. politics are about campaigning and being elected; not governing. Furthermore, the complexity and intractability of critical issues, from healthcare and entitlement reform to the conflicts in Iraq and Afghanistan, overload a political system designed by the best minds of the 18th century and perhaps not suited for the 21st century.

Indeed, Iraq, Afghanistan and the North African states where unarmed publics have overthrown or will overthrow unresponsive or corrupt and brutal governments are vivid examples of failures of governance. And this horseman will ride through most countries from advanced to failed or failing.

During the Cold War, the threat of nuclear and thermonuclear weapons and the specter of societal annihilation ironically promoted stability. Yes, we worry about weapons of mass destruction to include chemical and biological agents today. However, the paradigm has shifted to mass disruption as the weapon of choice for extremists and terrorists.

After the initial attacks of September 11th occurred, Osama bin Laden must have been elated by three unanticipated consequences: the collapse of the Twin Towers; American attack into Afghanistan that routed the Taliban in retaliation; and the enormous economic damage that accrued mounting into the trillions of dollars.

The last, of course, caught al-Qaida’s attention and disruption rather than destruction has become the modus operandi for terrorists and terrorism. The July 2007 London Underground attacks and forays into the cyberworld underscore this transition.

Unfortunately, neither governments nor international organizations are structured to deal with failing governance and the harnessing of mass disruption as the most effective tool for engineering political change. For example, if one looks at the United States, this mal-organization is readily recognizable. There is too much “stove-piping” in which organizations retain responsibilities that are too narrow and insulated. The failure of the Department of Homeland Security to absorb and integrate some 16 independent agencies and multiple intelligence shortcomings are exhibits A and B.

Congress is even worse organized with its committee structure and overlapping budgeting, authorization and appropriating cycles. In fact, the organization of State, Defense and CIA offices by geographic regions is different for each. President Barack Obama understands this. However, it is too early to see if any change will be made.

At the same time, the United Nations, World Bank, International Monetary Fund and NATO are creations of the Cold War. The European Union, Group of 20, African Union and Arab League among others don’t have the power or authority to cope with these realities of the 21st century.

Lenin asked “what is to be done?” The United States needs an overarching objective and a means to attain it. “Peace and prosperity through partnership” is a good slogan. But it must be operationalized.

The Pentagon has a range of war and contingency plans including those for cooperative security on a country basis. The White House needs to use that process to create country and regional plans that coordinate a whole of government approach which is controlled through the National Security Council. While not perfect, this is a step in the right direction.

As argued in earlier columns, a repository of regional experts and resources must be created under an international auspice. When a state such as Egypt requires assistance in moving more toward democracy and enhancing its economy, these resources can be made available.

We are challenged and threatened by three horsemen. We must first understand these challenges. Then we must we must have the courage and staying power to respond.

By Harlan Ullman who is chairman of the Killowen Group, which advises leaders of government and business, and senior adviser at Washington Atlantic Council