Pakistani villagers say landowners breached levees to save their own property 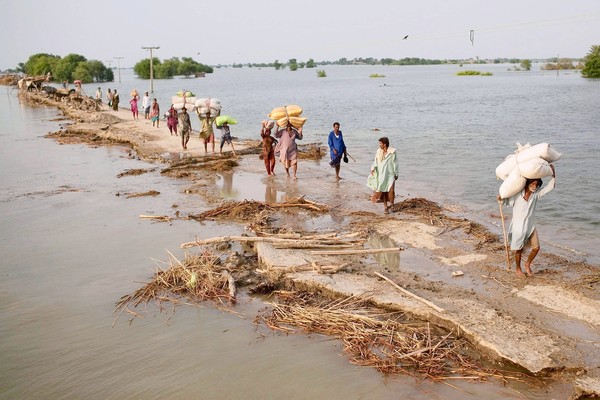 Several canal walls were breached during last month’s floods, and accusations are mounting that the ruptures were deliberate. But an irrigation chief says the surging Indus alone is to blame.

Ghulam Qadir was getting ready for sleep one night early last month when a loud thud startled him. Within minutes, torrents of water were rushing through his village’s dirt lanes and brick huts.

Qadir and 200 other people in the village of Ghauspur grabbed shovels and raced to the nearest dike, where, he said, an explosion had carved out a 20-foot-wide breach in the 15-foot-high earthen wall, allowing floodwater to speed toward their homes and farmland.

At the breach, armed guards working for a wealthy landowner in another village pointed Kalashnikov rifles at the villagers and ordered them to halt.

“They warned us not to go near it,” Qadir recalled during a recent interview at a relief camp in the southern city of Sukkur. “We are poor people and we couldn’t do anything, so we just retreated.”

Qadir says the landowner had ordered his men to breach the dike so floodwater that had been wreaking havoc across the northern part of Pakistan’s Sindh province would be diverted away from his fields and villages and, as a result, channeled toward Ghauspur.

The claim is one of many being made against wealthy landowners and politicians, who stand accused of breaching canal walls, dikes and embankments to safeguard their own property at the expense of those around them.

The accusations suggest that, amid the devastation that nature has meted out on millions of flood-ravaged Pakistanis since late July, an every-man-for-himself mentality has made matters worse, particularly in places where land ownership and power continue to be framed by a feudal system of politically connected land barons.

Feudal societies dominate Sindh province, an expanse of desert and scrub bisected by a ribbon of verdant, fertile land on either side of the meandering Indus River. Peonage keeps tenant farmers in perpetual debt to wealthy landlords across Sindh.

In many cases, the landlords have parlayed their wealth into political power and serve in the provincial or national parliament.

A latticework of dikes, canals and embankments overlays the thousands of acres of wheat, rice and cotton here in this southern province. When floodwater reached northern Sindh province, several canal walls and embankments were breached, and accusations are mounting that the ruptures were deliberately made by landowners intent on preserving their crops and belongings.

Prime Minister Yousuf Raza Gilani has said he will ask the Sindh and Punjab provincial governments to investigate allegations of deliberate dike breaches. One of those inquiries will focus on the Tori embankment, an earthen wall built in the 1930s to protect Sindh farmland and villages on the western side of the Indus.

On Aug. 7, the wall there breached, allowing floodwater to cascade westward. Some residents allege that once the Tori embankment was breached, other rich landowners hurriedly ordered the breaching of other dikes and canal walls to safeguard their land. As a result, the residents say, Indus floodwater submerged thousands of acres of farmland and scores of villages, leaving hundreds of thousands of residents homeless.

Villages 60 miles from the Indus, in neighboring Baluchistan province, were ravaged by floodwater that spilled over the Tori embankment. Weeks later, flow from the breach still threaten to cause flooding in cities such as Dadu, 150 miles southwest of Tori.

“The floods came because of nature, but what happened at Tori was a man-made disaster,” said Qadir Magsi, leader of a provincial political group called the Sindh Nationalist Progressive Alliance. “The people who did this aggravated people’s misery, but no one is being held accountable.”

What happened at the Tori embankment remains a mystery. Jam Saifullah Dharejo, Sindh’s irrigation minister, says the immense pressure created by the bloated Indus River caused the breach at Tori, and denied that it was caused by any deliberate act.

“It was an unprecedented amount of water that caused the overtopping of the Tori levee,” Dharejo said. “These allegations are either politically motivated, or made by people who have been affected by the flooding and are saying these things out of frustration.”

Magsi says he has spoken with witnesses who saw heavy earth-moving equipment ripping a hole in the Tori embankment the day the levee broke. However, when asked to supply names of those witnesses, Magsi did not produce them.

After the Tori levee breach, the floodwater threatened to inundate the village of Dari, hometown of Abid Sundrani, a Sindh provincial lawmaker. Dharejo says that Sundrani ordered a dike in the area to be breached but that the move was necessary to save the lives of Dari villagers. As a result of that breach, floodwater surged toward Garhi Taighani, the hometown of Taigho Khan Taighani, another wealthy Sindh landlord.

Taighani did not respond to requests for an interview.

Qadir said that when he and other Ghauspur villagers reached Garhi Taighani, they pleaded with Taighani’s guards to allow them to repair a breach there.

“But we were not allowed to do that,” Qadir said. “The guards said, ‘If you do that, we’ll drown.’ So I lost my house, my grain, and seven acres of rice fields. They’re influential, powerful people, and we can’t do anything to stop them.”