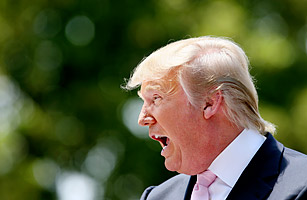 “I teach you the Superman, Man is something to be surpassed.” -Frederick Nietzshe, Thus Spake Zarathustra (1883)

I dislike saying this, but it seems these days that almost everyone is asking the million (billion?) dollar question: “What do you think of Donald Trump for President?” Personally, I believe it is another made-for television and pop culture event, another distraction that takes away from more pressing problems. When people, as many have, ask me what I think of Trump running for president, my answer is usually: “We already have too many multi-millionaires and billionaires running the country. Do we really need one more?”

Donald Trump, who is a multi-billionaire real estate mogul, with his own television show and who now appears to be everywhere in the mass media, is considering a 2012 GOP presidential run. Sadly, people are so desperate that almost anyone that appears to be powerful and arrogant is a shoe-in for president. Trump is now claiming that the “right messenger” could tell OPEC to lower crude oil prices, adding that if he would have been president he would have invaded Libya and have just taken their oil.

But sadly, like many Americans, Trump has been indoctrinated with the belief that he can do just about anything he wants too, after all this is America, is it not? And like most Americans, he has been raised in a culture that tells people there is a super hero inside, a superman that is just waiting to be unleashed and take control of their circumstances and of the world. But the concept of such exceptional individuals with super powers, ones who rise to rule exceptional nations and the world, actually started in the 19th century.

Much like modern America, which worships its seemingly endless array of technologically advanced innovations and adores its endless parade of wealthy people and celebrities who appear to be all-powerful, even infinite gods, the 1800’s was also obsessed with heroes and personality cults. While English children modeled themselves on the Duke of Wellington, Bismarck became a role model for Germans, as did Andrew Carnegie, John D. Rockefeller, J.P. Morgan and other rich tycoons for Americans.

Both Louis-Napoleon Bonaparte and Abraham Lincoln were French and American heroes that inspired fear and reverence. It was during this time too, that Georg Hegel invented the concept of Superman. Believing that most people were underachievers and insignificant, especially when considering the historical forces of his day, Hegel was searching for something that would escape the idea of fatalism and boredom, something that would make individuals seem like tiny particles in a universe.

Therefore, Hegel believed that occasionally a superior human being, a super individual of “world historical” importance and with great wisdom and prowess could emerge and influence history and political events. Regrettably, most of Hegel’s super human heroes were tyrants and despots who were either extremely wealthy and powerful, or militant and ruthless. Ideas and debates and cooperation were considered week in view of militarism and blood and iron.

Hegel’s view coincided with the collapse of faith and reason, including declining church membership. For many in Europe and America, Hegel’s superman concept, the worship of heroes and celebrities, replaced Christian saints. Friedrich Nietzsche, a German philosopher and writer, capitalized on Hegel’s hero worship by writing: “The anarchical collapse of our civilization was a small price to pay for such a genius as Napoleon. The misfortunes of…small folk do not count for anything except in the feelings of men of might.”

Nietzsche also believed the “artist-tyrant” was the noblest type of man, and that “spiritualized and intense cruelty” was the highest form of culture. This new secular religion was taught in many class rooms and in most text books throughout Europe and America. In other words, history was the record of the achievements of great men, and that great civilizations were founded by supermen with great strength who were tremendous individual achievers. Instead of history making heroes, heroes made history.

As America suffers under the weight of a near economic melt down, and as tens of millions of people are unemployed and homeless, it is easy to succumb to the myths of great men and self-made billionaires, or to a superman that will come along and right wrongs and be a kind of savior. But the danger is, as it was during World War I and World War II, that when people surrender their moral convictions and thoughts to superheroes, these superheroes have the potential of becoming demagogues.

Trump believes that the reason America is struggling at home and abroad is that people no longer respect America and that it is weak and hapless. He believes the answer to preventing people from laughing at America and to stop America’s decline is more “brainpower” and the right messenger. The real meaning behind Trump’s words, of course, is that America needs to use its technological superiority and military muscle and wealth to gain control of the world.

Like many other recent American leaders, Trump has grown-up internalizing the Superman Myth. He grew-up with Super Chargers, Super Balls, Super Elastic Bubble Plastic, and Super Soakers. He was familiar with television shows like Superfriends, Superfly, Supergirl, and Superman, and with video games called Superjock, and Super Mario. Combine this with America’s super individualism, super greed, super materialism, and super consumerism and you get a manic and overly charged superman.

A generation of males, like Trump, have evolved into watching (or owning) Super Bowl Games and trying to marry Super Models. They have built super corporations and super media conglomerates backed by a super military empire with super weapons. With their super lifestyles and super wealth, they support super wars against anyone who challenges them. But the global community is not like Superman’s fictional town Smallville. America’s supermen and their naive dualistic approaches-good versus evil-are destructive.

Supermen like Trump are also distracted and dangerous with their super greed and super ideologies. They live in super isolated worlds, ones that do not resemble most working class Americans. This was evident when Trump spent millions of dollars badgering President Barack Obama to prove he was born in the United States. Even though Obama’s birth certificate was already “on record,” Trump continued his hysterical and racist tirade.

When another document proved Obama was born in America, Trump surprisingly claimed: “I’m really proud, I’m honored. I have accomplished something really, really important…I managed to do what other could not. I was able to get the president to finally come out with a birth certificate.” Never mind tens of millions of Americans who are unemployed and without adequate healthcare (40,000 who die each year). Neither is there any ranting against a military industrial complex and its war that have cost trillions of dollars.

But when you have an ego the size of Mount Rushmore, what can you expect? As Trump mulls his bid for the presidency, don’t get too trumped up over his superman-like qualities and thinking he is some great business magnate and real-estate developer. Trump’s popular hit show, The Apprentice, never reveals how his gambling casinos have caused the decay and elimination of entire neighborhoods, or how his billions were made on insider trading schemes and government kickbacks during America’s inflated housing boom.

Instead of inheriting the Vietnam Conflict, like millions of other young men were forced to do, Trump inherited his father’s businesses and his wealthy empire, The Trump Organization. With city tax breaks for massive building programs and sports franchises, paid by the working poor and with government subsidies, Trump was destined for greatness. A greatness, though, that is very questionable and definitely not self-made. Trump’s enormity is like his business empire: contrived, manufactured and incorporated.

Recently, at his Treasure Island Casino on the Las Vegas Strip, Trump said American leaders were “stupid,” denounced healthcare for all, and said he would make America great again by acting unilaterally in the world. But can the world afford another age of supermen wanting more power and to make themselves-by using their nations-great again? One only has to recall the horrors of the 1900’s when people resigned their minds and wills and lives to those considered super human, to those promising “a place in the sun.”

“Donald Trump for President?” What else would you expect from a virtual generation raised on the ideals and concepts that somehow they are supermen-or at least try to live their supermen fantasies through someone like Trump-and they believe they have been destined for greatness by ruling the world. But in thinking about Superman and Smallville and the possibility of The Donald becoming America’s next president, along with America’s circus-like political atmosphere, maybe we still are in Kansas after all.

(Dallas Darling is the author of Politics 501: An A-Z Reading on Conscientious Political Thought and Action, Some Nations Above God: 52 Weekly Reflections On Modern-Day Imperialism, Militarism, And Consumerism in the Context of John’s Apocalyptic Vision, and The Other Side Of Christianity: Reflections on Faith, Politics, Spirituality, History and Peace.