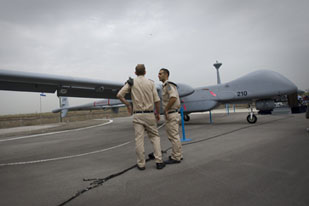 “The Heron TP is a technological and operational breakthrough.”

However, Israeli military officials did not specifically say if the drones were actually designed for operations against Iran.

Israel, which accuses Iran of seeking to develop nuclear weapons, has been putting pressure on UN Security Council members to support US moves for fresh sanctions against Tehran.

Tehran has repeatedly said that its nuclear programme is for purely civilian purposes and has highlighted the apparent hypocrisy of Israel, which is believed to be the Middle East’s only nuclear power.

On Tuesday, Mahmoud Ahmadinejad, Iran’s president, said that he believed Israel was “seeking to start a war next spring or summer, although their decision is not final yet”.

However, Binyamin Netanyahu, Israel’s prime minister, said that there were no plans for military action, calling Ahmadinejad’s remarks “manipulations”.

“We are not planning any wars,” he said after meeting Russian officials to discuss tougher sanctions against Iran.

“I wouldn’t be surprised if the things we are hearing are a result of Iran’s feeling there is an increase in talks about sanctions.”

Israel has repeatedly said that it hopes the situation will be resolved through diplomacy, but it has not ruled out military action and has frequently suggested that Iran could face a military strike.