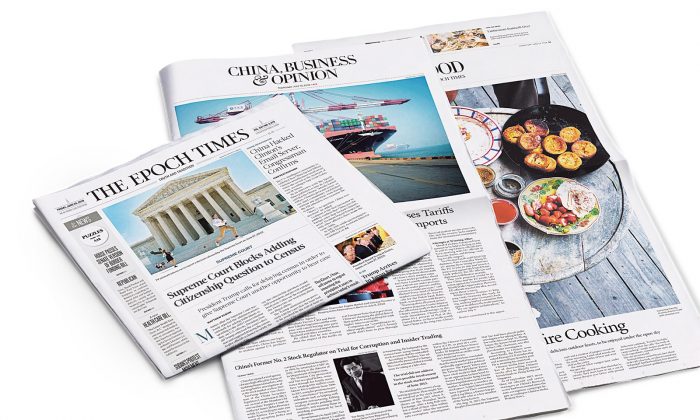 We were surprised to learn from media reports that Facebook has blocked The Epoch Times’ ability to advertise for print subscriptions. This appears to be a response to NBC News’ reporting on us.

Despite a vast “dark money” political conspiracy alleged in NBC News reporting, the reality is much simpler.

The Epoch Times has been running a very popular digital marketing campaign for our print-newspaper subscriptions. In the video advertisements, we discuss The Epoch Times’ editorial and feature content and encourage people to subscribe to our print newspaper.

Facebook blocked our ability in July to advertise on our main Epoch Times page, and didn’t provide us with a reason despite multiple requests for clarification. We have no reason to believe this is due to the content of the ads, as they were all approved by Facebook.

Since then, The Epoch Times has published its advertising on a number of other, new Facebook pages. Without exception, these ads are overtly Epoch Times advertisements for our subscriptions. And there is no secret there, since it’s all public.

Just as with our ads on our own Facebook page, every single advertisement went through Facebook’s review process and was approved and placed in the appropriate category before running.

Further, NBC News and MSNBC content about us has been riddled with inaccuracies, blatant errors, and misrepresentations. We refer you to our previous statement: Click here to read it.

For example, NBC News dismissed but doesn’t provide a single point of factual rebuttal to our extensive coverage of the actions by Obama-era officials to target the Trump campaign in 2016. The reality is that The Epoch Times has become a recognized leader in its coverage of this topic. The tireless reporting by our team of reporters based on actual evidence—including court documents, congressional testimony, and interviews—has received wide acclaim from readers across the country and validation from other media outlets, including The New York Times, which has cited our coverage.

The Epoch Times is an independently owned media and not owned or operated by Falun Gong, as we clarified in our statement to NBC News.

The Epoch Times was originally founded by Chinese Americans who had fled communism. They believed in truthfulness, compassion, and tolerance, the principles of Falun Gong. This is a fact that we have never shied away from. And it is exactly this commitment to truth that can be seen in our reporting.

Our reporters in China faced severe retribution for their work. Ten of our staff members were arrested and given extensive prison terms for their commitment to independent media.

What has come of free speech and freedom of the press if only media outlets that align with NBC’s views are allowed to advertise on Facebook? People across America are hungry for an independent and honest media, which is why The Epoch Times is now America’s fastest-growing newspaper.