With a loud “whoosh” and a blast of hot air, the pile of tires, wood and 2.5 tons of raw opium burst into flames.

It’s a government-sponsored “drug burn” in the western Afghan city of Herat, an event intended to reinforce the government’s claim that it is moving aggressively against the opium trade.

We flew early Sunday morning from Kabul to Herat to witness the event with Afghanistan’s Deputy Minister for Combating Narcotics, Daoud Daoud.

The drug burn was dramatic, but the nearly 5,000 pounds of opium is just a tiny fraction of the 6,900 tons  – or nearly 14 million pounds – produced last year in Afghanistan, according to the United Nations Office on Drugs and Crime. The acreage planted with opium has reportedly decreased over the last two years, but productivity per acre has increased.

Daoud told me he has similar “drug burns” planned, one next week in Kabul with 7 tons of opium, another the following week in Nangahar Province.

Afghanistan produces more than 90 percent of the world’s opium, much of which is processed into heroin. Earnings from opium make up about a third of the country’s gross domestic product. It is a major source of income to the Taliban, who levy a 10 percent tax on its production.  Various warlords and government officials are involved in the opium trade.  Ahmed Wali Karzai, the brother of Afghan President Hamid Karzai, has been implicated in the opium trade. 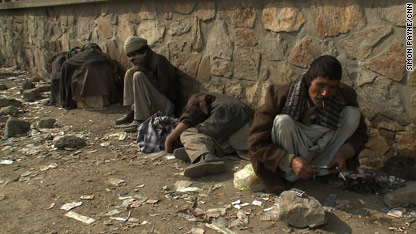 If you want to see the devastating impact of opium on Afghan society, just go to Kabul’s main stadium any day of the week. There, you’ll find dozens of men and teenagers, huddled against the wall, inhaling opium fumes or shooting up heroin. The ground is strewn with used needles.

There I met Shafiqallah, a man in his 30s – although he looked 20 years older – who has been addicted to opium for the last six years.  He works when he can as an air conditioner repairman, but hasn’t had any work lately.  He told me he begs for the money to pay for his $4-a-day habit, plus feed his wife and six children. In Afghanistan, the average daily per capita income is less than $2. Shafiqallah said underwent treatment late last year to overcome his addiction, but it clearly didn’t work.

The number of opium addicts in Afghanistan has skyrocketed in recent years. In 2005 it was estimated that there were 900,000 addicts in the country. Three years later that number had jumped to 1.5 million.

It’s not clear why the number of heroin addicts has spiked in recent years, but Afghan officials are hoping their efforts to eradicate opium through these organized “burns” will help curb the use of the drug – as well as cut funding for the Taliban.