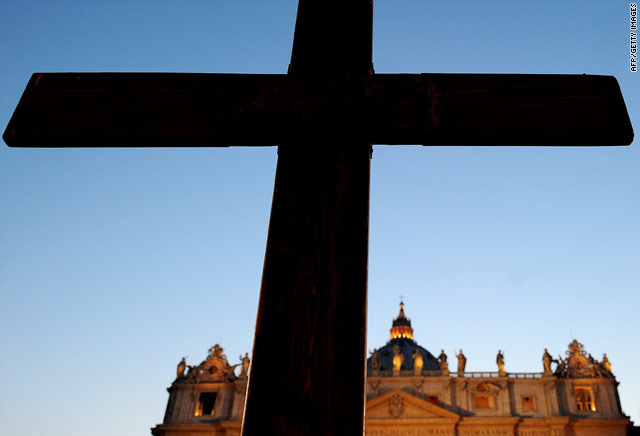 I carried a lot of crosses as a Catholic altar boy. I also learned to mumble phrases in Latin and breathed in enough incense to choke an elephant. There is something serene about being behind a ritual. It lets you observe and reflect. And wonder why in the world people show up.

Roughly six percent of Americans report that they are atheists or agnostics according to a 2012 Pew Research Center poll. But, that means that over 90 percent believe in a God. Pew also reports that 80 percent profess a religious affiliation and half of those with a religious affiliation regularly attend church. So what motivates 120 million Americans to attend a church, synagogue or temple?

I began running experiments searching for a biochemical basis for moral behaviors in 2001 and found in a decade’s worth of research that the molecule oxytocin motivated people to return kindness when they were shown kindness. Given my Catholic background and later skepticism that only Catholics would get into heaven (if such a thing exists), in my experiments I only asked college participants the most cursory questions about their religious beliefs. Guess what? Few college students are religious at all – and I found no difference in oxytocin functioning or prosocial behaviors between believers and nonbelievers.

Then the “weenie alert” went off in my scientist brain – I could learn so much more about the role of religion in moral behaviors if I got off campus. Free roaming humans are more religious than college students and I could study them in their natural habitat rather than in the sterile confines of my lab. Presuming, of course, religious people would let me study them.

After several meetings to gain permission, I went to a Christian church and took blood from volunteers before and after a Sunday service. I also took blood at a folk dance because many ancient religious rituals (and some current ones) involve coordinated movements. Then, I trekked deep into the rainforest of Papua New Guinea and took blood samples from indigenous peoples decked out in leaves and feathers as they did a centuries-old tribal dance.

In all these rituals, a majority of participants released oxytocin. Those who released oxytocin reported that they felt closer to their communities and said they would volunteer to help other community members. We did not find that the change in oxytocin was associated with an increased sense of connection to God or some “ultimate reality.” In fact, there was no discernible difference between nonreligious and religious rituals at stimulating oxytocin release. A rugby team I studied produced as much oxytocin during their warm-up as did evangelical Christians who worshipped and sang in my lab.

The effect of ritual even worked for this skeptical scientist. Due to several equipment failures, I was embedded in my village in Papua New Guinea for several days with nothing to do. Quite quickly the villagers brought me into their daily rituals and I felt like I had joined their community and formed attachments to its members. I still feel this way.

So why do people show up at church? Because people show up at church. Rituals build community by releasing oxytocin making rituals “sticky.” An older woman in our folk dance sample told me she attended because dancing reduced her chronic pain. I asked her if this was due to the exercise or the people. After a pause, she said “both.” Our data support her intuition.

Research from other scholars has shown that regular churchgoers are generally happier and healthier. Why? Oxytocin reduces stress responses and having more relationships make us happy. Churches also give attendants a chance to help others, another activity that increases one’s satisfaction with life.

Sure, you don’t need God, or church, to be happy or healthy. But the desire to park bottoms in pews has led churches in the U.S. to be effective community builders. Humans need community and even reminders to be a bit less selfish and help others by studying ancient texts. Perhaps the saying “God is love” has it backwards. When we love others, we embody Godliness.

The proportion of atheists and agnostics may keep on growing, but as long as churches use rituals to bring people together, God is unlikely to go away.

* Paul J. Zak is a professor at Claremont Graduate University in California and author of ‘The Moral Molecule: The Source of Love and Prosperity.’