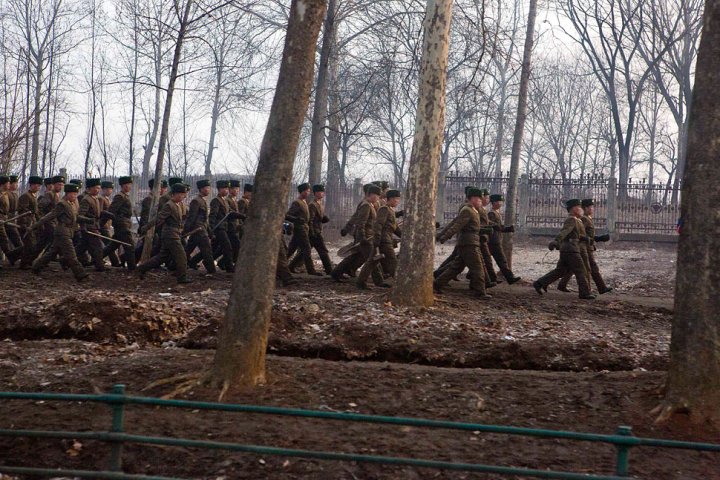 IT seems paradoxical to say it, given Pyongyang’s almost daily exercises in escalation, but the North Korean leadership almost certainly does not want to go to war. Not that it would flinch at a massive loss of life if it meant propping up the regime. That, after all, has been the logic by which the Kim dynasty has run the country for more than half a century. The problem is that a full-scale conflict would almost certainly mean the destruction of the North Korean state and the likelihood of a violent end for its young leader, Kim Jong Un. “No, he doesn’t want to start a war because a war is suicidal from his perspective,” says John Delury, a professor of Chinese studies and North Korea watcher at Yonsei University in Seoul. “For him the endgame is not a war.”

Like his father before him, Kim is focused on surviving. While the isolated North Korean leadership is sometimes seen as erratic and crazy — a case not helped by Kim’s partying with Dennis Rodman or publishing photos of a map showing strike plans for the continental U.S. — it remains committed to staying in power. It has survived for half a century by avoiding any fights that it can’t win or at least, as with the Korean War, draw to a bloody stalemate. For all its goading, North Korea is unlikely to want to start a doomed conflict now.

So why then has North Korea gone into incitement overdrive, threatening preemptive nuclear strikes, withdrawing from the 1953 Korean War armistice, cutting off hotlines with South Korea, pledging to restart the plutonium reactor at Yongbyon that was shuttered as part of a 2007 deal and, on Wednesday, blocking South Korean workers from a jointly run factory park? One explanation is that North Korea may feel more isolated and vulnerable than usual, despite its recent displays of nuclear and ballistic-missile capability. The annual military exercises by U.S. and South Korean forces have angered North Korea in previous editions. And this year’s Foal Eagle exercise has featured an extensive display of American military hardware, including B-2 stealth bombers that flew from their home base in Missouri to drop inert bombs on a training run over South Korea.

China, North Korea’s only real ally, helped punish it after the Feb. 12 nuclear test, which led to another round of U.N. Security Council sanctions. The full impact of Resolution 2094, which includes steps to block funding of North Korea’s nuclear-weapons program and prevent its import of some luxury goods, has yet to be seen. And there is no sign that China is preparing to abandon its only treaty ally. Indeed, after Deng Yuwen, an editor at the Chinese Communist Party’s Study Times, wrote an op-ed for the Financial Times calling for just that, he was removed from his job, South Korea’s Chosun Ilbo reported. But from North Korea’s perspective, China’s willingness to back sanctions is still cause for concern. “I think for North Korea that type of cooperation is lethal if it’s maintained because it drastically reduces the space in which it can maneuver and leverage the different parties off each other,” John Park, a Korea expert at the Massachusetts Institute of Technology, said in a recent discussion hosted by the Korea Society in New York City. The U.S.–South Korea military exercises, which are intended in part to show allied military resolve and capability, might also feed China’s fears about what it would face along its border if North Korea were to collapse and the Korean Peninsula were unified under a pro-U.S. government. So far though the Chinese government hasn’t voiced any concerns about the show of force targeting Pyongyang, Reuters reported on Tuesday.

And with new leadership in China and South Korea, Pyongyang wants to see how its neighbors will respond to its latest moves. “They are a weak, small country surrounded by South Korea, China, Russia, Japan and the U.S.,” says Delury. “They are completely outclassed. That makes them highly responsive. We tend to think they’ve got everything planned out and we’re falling for their tricks, but they’re actually responding and testing reactions and then figuring out what happens next. It’s dangerous to think they’ve got it figured out.” That approach has been key to what Andrei Lankov, a North Korea expert at Seoul’s Kookmin University, says is a well-worn technique of manufacturing crises in hopes of winning a payoff. “For many years, actually for decades, North Korea has played the same trick, which until recently has worked well,” Lankov said in a recent interview with Australian Broadcasting Corporation:

First, they manufacture a crisis. They behave pretty much like they’re behaving now. They drive tensions high. And sooner or later, the international community and the major players begin to feel unwell and tense and insecure. At that point, North Koreans suggest to start negotiations, and they extract aid and other concessions in exchange for their willingness to return to the status quo. So, they first manufacture a crisis, and then they get paid for resolving the crisis. This approach, these tactics have worked perfectly well for many, many years, but recently it’s losing its efficiency, because the outside world, above all the United States, have finally learned how it usually works with North Korea, and they are not really rushing with money and concessions. And this is what North Korea wants above all: money and concessions from the outside world. So, obviously, it’s quite possible that the North Korean decisionmakers decided to go really seriously loud this time.

So how best to respond? Lankov argues that it would “be better if the world paid no attention whatsoever to all these threats.” A nice idea, though hard to put in practice while North Korea keeps upping the ante.