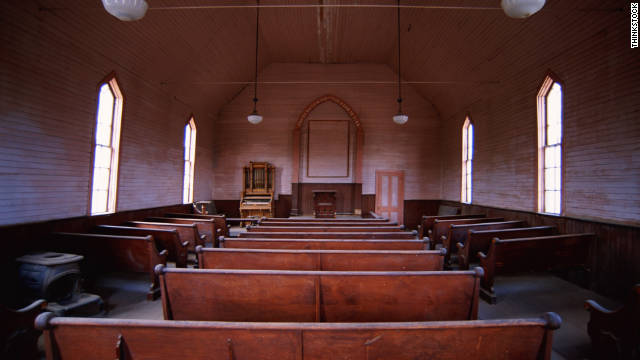 The fastest growing “religious” group in America is made up of people with no religion at all, according to a Pew survey showing that one in five Americans is not affiliated with any religion.

The number of these Americans has grown by 25% just in the past five years, according to a survey released Tuesday by the Pew Forum on Religion and Public Life.

The survey found that the ranks of the unaffiliated are growing even faster among younger Americans.

Thirty-three million Americans now have no religious affiliation, with 13 million in that group identifying as either atheist or agnostic, according to the new survey.

Pew found that those who are religiously unaffiliated are strikingly less religious than the public at large. They attend church infrequently, if at all, are largely not seeking out religion and say that the lack of it in their lives is of little importance.

And yet Pew found that 68% of the religiously unaffiliated say they believe in God, while 37% describe themselves as “spiritual” but not “religious.” One in five said that they even pray every day.

John Green, a senior research adviser at Pew, breaks the religiously unaffiliated into three groups. First, he says, are those who were raised totally outside organized religion.

Second are groups of people who were unhappy with their religions and left.

The third group, Green says, comprises Americans who were never really engaged with religion in the first place, even though they were raised in religious households.

“In the past, we would describe those people as nominally affiliated. They might say, ‘I am Catholic; I am a Baptist,’ but they never went” to services, Green says of this last group. “Now, they feel a lot more comfortable just saying, ‘You know, I am really nothing.’ ”

According to the poll, 88% of religiously unaffiliated people are not looking for religion.

“There is much less of a stigma attached” to not being religious, Green said. “Part of what is fueling this growth is that a lot of people who were never very religious now feel comfortable saying that they don’t have an affiliation.”

Demographically, the growth among the religiously unaffiliated has been most notable among people who are 18 to 29 years old.

Green says that these numbers are “part of a broader change in American society.”

“The unaffiliated have become a more distinct group,” he said.

Pew’s numbers were met with elation among atheist and secular leaders. Jesse Galef, communications director for the Secular Student Alliance, said that the growth of the unaffiliated should translate into greater political representation for secular interests.

“We would love to see the political leaders lead on this issue, but we are perfectly content with them following these demographic trends, following the voters,” Galef said.

“As more of the voters are unaffiliated and identifying as atheist and agnostics, I think the politicians will follow that for votes.

“We won’t be dismissed or ignored anymore,” Galef said.

The Pew survey suggested that the Democratic Party would do well to recognize the growth of the unaffiliated, since 63% of them identify with or lean toward that political group. Only 26% of the unaffiliated do the same with the Republican Party.

“In the near future, if not this year, the unaffiliated voters will be as important as the traditionally religious are to the Republican Party collation,” Green predicted.

Green points to the 2008 exit polls as evidence for that prediction. That year, Republican presidential nominee John McCain beat President Barack Obama by 47 points among white evangelical voters, while Obama had a 52-point margin of victory over McCain among the religiously unaffiliated.

According to exit polls, the proportion of religiously unaffiliated Americans who supported the Democratic presidential candidate grew 14 points from 2000 to 2008.

In announcing the survey’s findings at the Religion Newswriters Association conference in Bethesda, Maryland, Green said the growing political power of the unaffiliated within the Democratic Party could become similar to the power the Religious Right acquired in the GOP in the 1980s.

“Given the growing numbers of the unaffiliated, there is the potential that that could be harnessed,” he said.