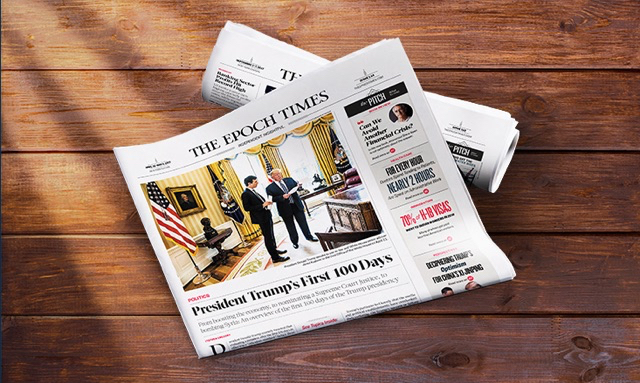 Last week, we were contacted by two NBC reporters who posed a series of highly inappropriate questions.

The NBC reporters questioned the religious beliefs of some of our staff members, sought to discredit their beliefs, attacked our journalism based on personal opinion rather than objective analysis, and even sought out information on the personal lives of our staff.

In responding to NBC with this open letter, we are not only defending The Epoch Times, but also journalism itself, freedom of the press, and freedom of belief.

As a fast-growing independent media, we proudly uphold the highest standards of journalism.

Unfortunately, the bane of journalism today is the all-too-common practice of writing news to conform to a pre-existing narrative or agenda. This is what The Epoch Times has sought to avoid in all that we do. The best journalism of the past had the truth as its standard, not political advantage.

NBC’s questions seek to dig out what they assume is our agenda by asking about our coverage of President Donald Trump and our relationship with the spiritual practice of Falun Gong.

It certainly does appear that NBC has an agenda with respect to covering the Trump presidency. A study by Harvard Kennedy School’s Shorenstein Center on Media, Politics and Public Policy found that NBC’s coverage of Trump’s first 100 days in office was 93 percent negative.

The plain truth is that because The Epoch Times’ coverage of Trump differs from that of NBC, two reporters have sought to hunt for an agenda that would discredit us.

And the story they have in mind is no small undertaking. For weeks, ex-staff members have been contacting us to let us know that NBC had been asking about their work at The Epoch Times. What a great deal of effort has been put into this story.

NBC asked directly about our having an agenda with this question: Much of the Epoch Times’ recent coverage has focused on the promotion of President Trump’s policies, interviews with surrogates, and a “deep state” conspiracy to “spy” on his campaign during the 2016 election. Do you feel like this is a fair characterization and do you consider the Epoch Times to be pro-Trump?

The question substitutes supposition for evidence. The failure to take a factual approach leaves up in the air the characterization of our journalism, and NBC is free to assert their opinions about what we do.

Other questions want to draw conclusions from the private lives of our staff, as in this offering: Is the Epoch Times predominantly staffed by volunteers? Do some Epoch Times interns, volunteers, or employees live in a shared home?

This is simply inappropriate. What bearing do individuals’ living arrangements have on the journalism of The Epoch Times? Would NBC ask New York Times journalists if they shack up or share an apartment? This digging into private lives can have only one motivation: to find something that can be used to discredit The Epoch Times.

And then there are questions about the spiritual practice Falun Gong.

The question assumes that individuals’ personal beliefs are a fit subject of inquiry. Would NBC ask about the role of the faith in the work of a New York Times reporter who happened to be Jewish?

The question is meant to root out the agenda NBC is looking for. In doing so, it tramples on our society’s long-held conviction that matters of conscience are rightly private. But much of today’s journalism has no problem with stripping away the customary attitudes that protected freedom of belief.

Another question asks directly about the spiritual beliefs of Falun Gong practitioners:

One former Epoch Times executive and practitioner claims that Falun Gong practitioners believe that the world will soon see a “weeding out process” that will pit those who are sympathetic to Falun Dafa against those who are sympathetic to the Chinese government. Is this a fair characterization? And does the Epoch Times editorial staff believe this?

NBC’s characterization of Falun Gong puts its beliefs in a false light, is similar to the Chinese Communist Party’s propaganda attacking Falun Gong, and has the surely unintended effect of helping the CCP justify its 20-year-long persecution of Falun Gong.

At the same time, this straw man that NBC puts forward and links to The Epoch Times has one purpose: discrediting our journalism.

In response to NBC’s questions, we issue the following official statement:

Mr. Li Hongzhi, the founder of Falun Gong, only addresses spiritual issues with his disciples. He has no role in The Epoch Times.

The Epoch Times, which was incorporated by John Tang, is primarily funded through advertising and subscriptions.

We take advantage of different marketing platforms to grow our subscriber base, including Facebook. On Facebook, we use video ads to drive subscriptions. The Epoch Times’ subscription advertisements have no political agenda. The only reason some of them are run as “political advertising” is that online platforms require them to be categorized as such.

The Epoch Times is staffed by full-time and part-time paid employees as well as contractors and freelance contributors, and we believe that a person’s belief system is their own business.

The Epoch Times and NTD Television, while they are sister media, are entirely separate entities. While we are aware of the entertainment show “Edge of Wonder,” which was founded by former Epoch Times staff, The Epoch Times is in no way connected with it, as the show’s website makes clear.

Our free press has special privileges in our society, as suggested by the term “The Fourth Estate.” In order to defend those privileges, the press must show it is acting in a responsible manner. In responding to NBC, The Epoch Times seeks to vindicate our media and, in doing so, the role the press should play in our society.