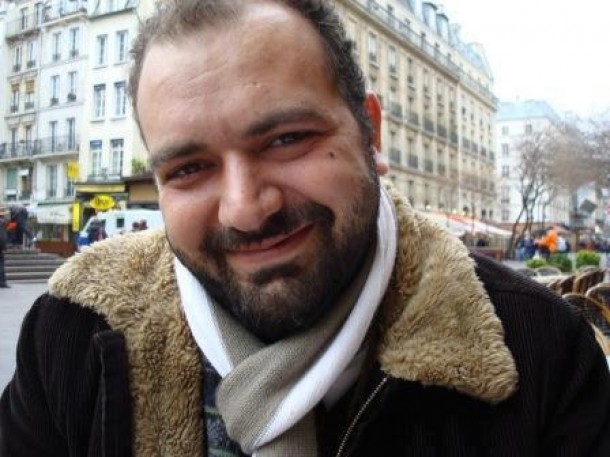 Orwa Nyrabia is looking for an apartment in Cairo for a few months, just enough time to wrap his latest movie a month after being released from a Syrian jail.

Nyrabia was arrested on August 23 in Damascus and held for 22 days. This 35-year-old filmmaker and creator of the renowned Dox Box film festival calls himself a “subtle opponent” of the regime. Movies are what saved him.

“This detention was the biggest fiction of my life,” he says, still amazed at how surreal the experience was: physically unharmed himself, yet witness to horrors suffered by other prisoners around him.

Nyrabia used his fame to help the revolution from the very beginning and believes another activist turned him in under torture. Yet he quickly realized he would be getting special treatment. “When I heard an officer ask, ‘Is that the brilliant filmmaker?’ I knew he’d heard that word on television.”

Outside, an international support campaign was already working on his release. His friends had his Gmail, Skype and Facebook accounts closed in order to prevent other activists from being identified and arrested. “Google, Facebook and others have good arrangements with the resistance.”

Unlike his 80 cellmates pilled up in a 3×7-meter room, he wasn’t tortured and his case moved along fast; his interrogation began as soon as he landed in jail. “Their fantasy is CSI, the TV show. They want to catch spies. They have a lot of imagination. They’re obsessed with a supposed universal conspiracy, they really believe it. They can’t imagine that an activist isn’t a foreign agent. That’s why they pay more attention to foreign ties than what activists actually do on the ground.”

He refers to his jailers as “poor people,” before recalling the time when one of them asked seriously who this “Robert De Niro guy” was in a video pleading for his release and how he knew him. (His arrest prompted several artists including De Niro, Judd Apatow, Michelle Rodriguez to shoot a video called “Free Orwa”)

“I wanted to laugh sometimes,” he says.

On his computers, regime officers found long lists of medical supplies sent by activists and field hospitals, logs of money sent to families. Nyrabia made up stories and names, mixing reality and fiction so much so that he sometimes got them mixed up. “Sometimes I would tell a true story forgetting it wasn’t fiction. At night, I would repeat imaginary names to my cellmates so I wouldn’t forget them.”

What struck the filmmaker most is how little his jailers knew about the activities of regime opponents. “They had a lot of wrong information, and even when they were right, they weren’t really sure. They don’t know anything about the resistance, they don’t understand how the National Council or the coordination committees work. Their only strategy is to get names through torture. They are looking for 97,000 people. It’s complete anarchy.”

In his cell, out of 80 men, there were two real informants and only three real activists. Ten were simple criminals that had no idea what they were being accused of. But what was really striking was that most of his cellmates (65 out of 80) were soldiers in their twenties without any political conscience who had been held for two, five or seven months, suspected of “thinking about deserting” or accused of “criticizing the shelling of their village.”

For Nyrabia, the confusion stems from the fact that there is no communication among the regime’s four main security entities. Military intelligence, air force intelligence, political security, and state security are even fighting each other for Bashar Al-Assad’s favor.

“Mazen Darwish, a journalist, was arrested eight months ago by air force intelligence officers, who are the worst. We have no idea what happened to him, even though he is much more moderate than I am. There is no logic.”

Nyrabia describes uneducated, tired officers uneasy about their job, complaining they had had no vacation since the beginning of the revolution, and whose obsession with conspiracy blinded them to their own inhumanity. One day, one of the officers got very angry at a Human Rights Watch report accusing the prison of hanging people by their feet for three days. “Here, we always hang them by the hands for three days, never by the feet!” said the officer, excited to have uncovered a “foreign lie.”

Nyrabia recalled that the officer who cuffed him “kept saying that when I left I would say he had been mean to me.”

The general sense of unease brought more violence. At noon, the doctor always started his rounds by hitting sick prisoners. Nyrabia saw his cellmates return broken, with no nails and signs of electric shocks. The lack of sun, rampant humidity, insects and skin diseases were nothing compared to the constant screams of tortured prisoners. At night the screams, mixed with the laughter of drunken officers and an awful smell of sweat emanating from torture rooms, took over the cell through the one and only window. “I will never forget those nights and that smell.”

Nyrabia says he came out of jail even more convinced that the revolution cannot succeed without outside help. For him, the behavior of the West shows complete blindness. “If an Islamist activist needs money to help injured people, he calls Saudi Arabia or Qatar and the next day, there’s money on his account,” he says. “But when a non-religious person calls Europe to save the same injured people, it takes the West a month to say ‘yes,’ and then they want receipts!”

A liberated Syria will swing toward “those who saved the people in need,” Nyrabia explains. “Qatar gives us $55 million in humanitarian aid when the US promises to give us only 15. The West says it is preventing the Islamist danger by not intervening, but the result will be the opposite.”

But Nyrabia believes most of Qatar’s money does not transit by Syrian Islamists. “Qatari money transits through…” He pauses, takes a deep breath and carefully chooses his words “… free-market rightists.” Businessmen? He refuses to elaborate.

Though he is safe, Nyrabia weighs every word to avoid endangering others, and to be able to return to Syria some day. “’Free-market rightists’ is enough. And that’s good, it’s too complicated for them, they won’t understand,” he says.

Before returning to Syria, the filmmaker his message to be heard. “One of the miracles of this revolution is that the Syrian diaspora is being brought together through the Internet,” he says. “There are hundreds of networks around the world that find ways to transfer money. So why do Western bureaucrats keep flooding the Syrian Red Crescent [the Muslim version of the Red Cross] with money?” Although this official organization functions according to international law and gives receipts, Nyrabia suspects that it is under the regime’s control and that it sends aid only to pro-Assad regions.