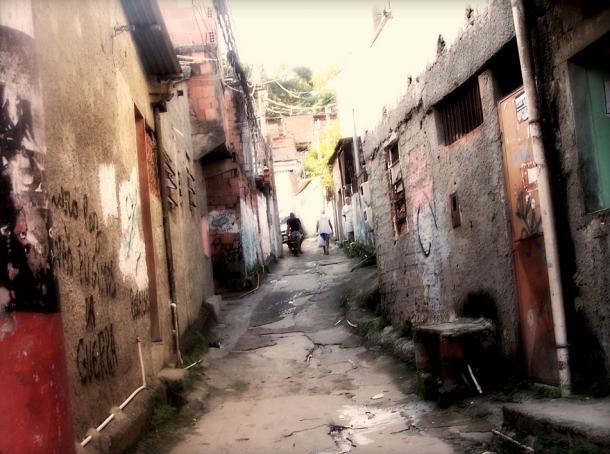 The area surrounding the house of Eomar Freitas, 36, looks like a war zone after air strikes. The shopkeeper’s home neighborhood is Rio’s Favela do Metrô, a slum tucked between Radio Oeste Avenue and the metro, next to the Maracanã station.

Located just 500 meters from the Maracanã stadium, where the 2014 World Cup’s final match is going to be played, the slum has been leveled by the city. Since October 2010, 354 families have been transferred to nearby public estates. For many, this was a dream come true. But for the 313 remaining families, it has been a nightmare.

The last remaining homes are surrounded by piles of rubble and garbage, which have caused a rat infestation. Crack addicts and homeless people squat in the empty houses. The others face constant thefts, feeding the feeling of insecurity.

Little by little, houses are being demolished. “It looks like you are in Libya,” says Freitas, who bought his piece of land 18 years ago.

He built a small four-story house, where he lived with his family. Now he is the only one left. He wants to protect his property from looters or demolition.

“My house was broken into eight times by crack addicts. They took three aluminum windows, four sinks, two air-conditioners, taps and even cables,” says Freitas, who moved from the fourth floor to the ground floor, where he can make sure no one comes in. “I haven’t caught any one yet, but if I catch someone robbing my house, I will kill them. No one can stand such a situation.”

Breaking out from World Cup fever

In the past four years, Mayor Eduardo Paes has evicted 19,000 families from 192 slums around the city.

The city’s housing secretary, Jorge Bittar, says the Favela do Metrô demolition is not related to the World Cup. He assures that the favela was singled out for destruction because of its “precarious homes, built in an appropriate area.”

However, he does acknowledge failures in the process. “The people who live here, who were already poor, are now even worse off.” The initial plan was to relocate all of the favela’s inhabitants at the same time, but the new housing estate where the people were to be rehoused was not built in time, he told Folha.

Francicleide da Costa, 44, president of favela’s community association asks the city to help the families who are still living in the slum. The area has become a garbage dump. “Comlurb (in charge of urban cleaning services) barely comes here. The abandoned houses are full of rats and the smell is unbearable,” she says.

Bittar says that he intends to finish the demolition in the next three weeks. “We will ask Comlurb to pick up the garbage and waste more often. I can ask the secretary of Social Action to do something about the crack addicts. And add security reinforcements.”

Contacted by Folha, Mayor Eduardo Paes, who is up for reelection , refused to be interviewed.

Read the article in the original language.