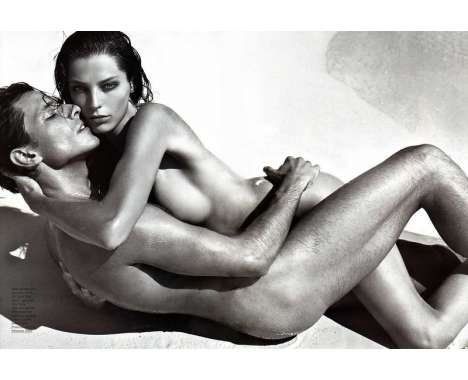 Sex Doesn’t Gross You Out When You’re Aroused

Getting turned on overrides women’s natural disgust response, a study suggests, making them more willing to do things they otherwise wouldn’t

If you think about it, sex is actually sort of disgusting, what with all the sweat, saliva, fluids and smells. So much so that a group of researchers from the Netherlands got to thinking, How do people enjoy sex at all?

According to their small new study, people — at least women — may be able to get over the “ick” factor associated with sex by getting turned on. Sexual arousal overrides the natural disgust response, the researchers found, and allows women to willingly engage in behaviors that they might normally find repugnant.

Afterward, all the women were asked to perform 16 tasks, most of them icky, like drinking from a cup with a bug in it (the bug was fake), wiping their hands with a used tissue, eating a cookie that was next to a live worm or putting their finger in a tray of used condoms.

The Ancient Sexual Revolution that May Have Spurred Human Monogamy)

The researchers found that the women who watched the sexually arousing video rated the unpleasant tasks as less disgusting than did their counterparts who were not sexually aroused. They were also more likely to complete more of the tasks, suggesting that sexual arousal not only dampens the disgust response but also influences how much women are willing to do.

That helps explain why so many people keep having sex, despite the inherent messiness of it, the researchers said. “The findings indicate that both the impact of heightened sexual arousal on subjective disgust and also on disgust-induced avoidance will act in a way to facilitate the engagement in pleasurable sex,” the authors wrote. Previous studies suggest that sexual arousal has the same effect on men.

“I think this study is interesting in that it helps support the idea that sexual arousal lowers inhibitions and often enables one to participate in activities that they might normally find disgusting or off-putting,” Dr. Ian Kerner, a sexuality counselor and author based in New York City who was uninvolved with the study, told ABC News.

Penis Size: It May Be Written in the Length of His Fingers

The findings may also shed light on conditions involving sexual dysfunction. Lack of sexual arousal may interfere with healthy sex by failing to dampen the disgust factor, the authors said. Essentially, if women are not appropriately aroused before sex, they may find it even more repulsive and increasingly start to avoid it. Low arousal can also render women physically unable to enjoy sex, the authors said:

As a result, this could lead to problems with sexual engagement, and lack of vaginal lubrication, which in turn could increase friction and cause problems such as pain with intercourse. It is thus possible that in extreme cases the woman might acquire negative associations with sex and might start to avoid sexual intercourse altogether.