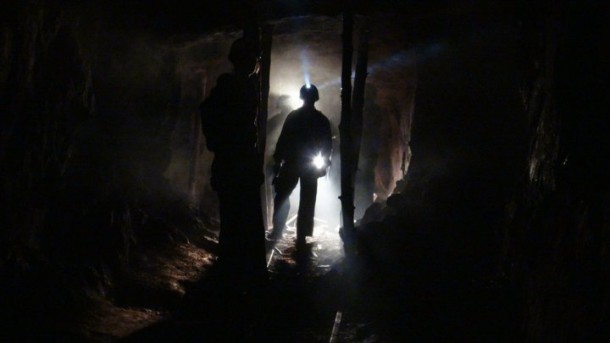 It’s a small open-air factory, impossible to spot from the road. You have to go into Thabong, the township in Welkom, three hours south of Johannesburg, to discover it in an old mining town in the G-Hostel, where a dozen workers are clustered, busy transforming rocks into gold.

Behind the apparent disorder hides a well-oiled production chain. First the mineral blocs are extracted from deep beneath the earth, and heated up. They are then ground into a powder using a cast-iron bar that resonates with a clang in the courtyard with each hit. The particles are separated from the rest of the rock using a cylinder filled with cold water and mercury that is rotated with a crank.

Finally, three hours later, a mixture of the precious metal appears in a wrung-out rag.

“To get a gram of gold, you have to work at least a kilo of rock, it’s exhausting work,” says one of the men. He is from neighboring Lesotho and has been living in Thabong for the past five years. “I don’t like doing illegal things, but I don’t have a choice, I have a wife and three children to feed, I also have to help my two brothers,” he says. He wants to remain anonymous. “Call me David,” he adds.

He is also called zama zama (“he who seizes the opportunity,” in Zulu) in the abandoned gold mines of South Africa. Three times a year, he goes alone down two, three, four kilometers deep into the Earth. For “only” two to six weeks. But some other like him sometimes stay months without seeing the light of day.

“I work four hours, then I sleep five, and so on,” he says. “There is little oxygen, we lack water to keep back the dust, it’s almost 40 degrees Celsius…” His colleagues give him insistent looks. David stops talking and walks away. Many zama zama disappear or react hostilely when faced with an outsider.

The next part of the production chain is hidden from curious eyes. In the neighboring houses, the mixtures are weighed and passed from hand to hand. A gram is sold for 20 to 35 euros. The buyers? South Africans, foreigners – Zimbabweans, among others – who are at the head of organized crime networks that take the gold out of the country to sell and launder it through legal channels.

Yet this manna is the mere relic of a century of intensive exploitation of the rich South African substratum. In 1970, the continent’s top economic power provided 70% of the world’s demand for gold. Forty years later, that number has dropped to 20%. This decline was inevitably followed by massive layoffs in the Welkom region, which used to be the prize jewel of Ernest Oppenheimer, the South African mining magnate who founded the Anglo-American company.

Today, these unemployed people, who know the South African underground labyrinth better than anyone, regularly return to the depths to make their bread and butter under the blood-red earth. Who knows how many of them are circulating in the hundreds of kilometers of tunnels that aren’t profitable for companies anymore? Thousands? Tens of thousands?

A little further away from the G-Hostel, Terrence (not his real name), a legal miner from 1986 to 2000, takes his mobile phone out from his pocket. He proudly shows pictures of himself with a t-shirt and shorts posing in a tunnel he can barely stand in. “These are memories for my two children,” he says.

In 2008, this 42-year-old father almost never saw them again. He had been underground for six months with five companions, and they were out of water, food and light for four days. “A guy was guiding us with a flame from his lighter, we were lost, we were yelling, I thought of my family a lot,” he says. A legal miner working nearby finally heard them and saved them.

Other zama zama weren’t so lucky. In 2009, 86 illegal miners died, poisoned by a deadly gas in an abandoned Welkom tunnel that was no longer secure. In March, east of Johannesburg, approximately 20 men were crushed by the collapse of a 40 by 30 meter rock.

“Most accidents go unnoticed, because they aren’t reported,” says one specialist. If they want to survive, the miners also have to bend to the rules of underground life imposed by criminal factions. “They are constantly fighting to control a maximum of territory, and they settle disputes with AK47s,” says the same specialist.

Terrence knows how it works: “If you break the internal rules, you are killed, beaten, or turned into the police when back above ground.”

Underground you can buy anything – at a price. A bag of white bread? 10 euros. A lamp? 100 euros. A pack of 20 cigarettes? 30 euros. The result is that productivity can never lag. “I extract 20 grams per day, so 350 euros, but I have 200 euros in costs,” says one miner. “I also have to regularly give 500 euros to a comrade who sells my gold above ground and brings back cash to help me hold out.”

Instead of taking risks by using ropes to go down disused wells, some zama zama prefer to use the entrances of mines that are still active. “Going down and back up in the iron cages is 2,000 euros,” says one of them. The tunnels that are still used are linked to those that aren’t.

These past few months, the Harmony Gold company, which exploits most of the region’s mines, has strengthened its surveillance. Several dozen employees were accused of taking bribes and were suspended. Biometric controls using fingerprints were put in place. In July, the C.E.O. announced that it was also against the rules for miners to bring food down underground with them. The goal: to avoid resale to zama zama.

Security guards have also started patrolling the entrances to disused wells. Today, two illegal miners had just been caught. “We can’t stop, there are so many of them,” says one officer who is sweaty from running through fields. “But how do you expect us to manage? There are only 19 guards for 21 wells, and given the amounts of money going around, it isn’t hard to bribe some of my colleagues.”

Nearby, another guard shows a mobile-phone picture of himself on a hospital bed. “A year and a half ago, I ended up alone face to face with 40 zama zama, they beat me with stones, I had 44 stitches on my skull,” he says.

Every two weeks, several dozen policemen raid the G-Hostel. For two hours, houses are searched, gold washer equipment is confiscated, and 200 to 300 people are arrested, often illegal immigrants. They are typically released within a couple of days.

Behind the official façade – “we are winning the battle” – Captain Stephen Thakeng, a Welkom police spokesperson, recognizes that “we are mostly doing these actions to minimize the impact of illegal miners.”

Faced with this impatience, the South African policeis promoting its “Operation Mercury.” On March 30th, two South Africans and three Zimbabweans were arrested after a five-month investigation. They were suspected of heading a criminal network.

On the day of the arrest, police agents pretended to be gold dealers. But one investigator admits the scale of the work ahead. “We need time and means: there are only four of us working on this in the region,” he says.

The South African Minister of Natural Resources Susan Shabangu is still determined to end this trafficking, encouraging mining companies to bar the entrance to disused mines. “We need to eradicate this problem that is damaging our economy, by eliminating these gangsters and by ending our tolerance of the zama zama,” says one government source.

But in the Brakpan mining region, east of Johannesburg, more than half of the hundreds of wells had to be closed twice since the end of 2011. “Nine of them were filled up ten times each because the zama zama kept digging new openings!” says one mining company manager, who says that the operation costs 200,000 euros. “They are stealing our gold,” he says. “We have to take care of all the costs.”

Visiting the abandoned mines near Brakpan in mid-August, Minister Shabangu ended up face-to-face with 30 zama zama on foot. They hadn’t been able to go down a well because the entrance had been solidly locked up.

“What you are doing isn’t good and it is dangerous, you could die,” she told them.

“So give me work,” one of them shot back. He left his phone number with the Minister. “She told me that she would call, but I don’t believe it,” he said afterwards. “So, if it is blocked here, I’ll just go into another mine.”