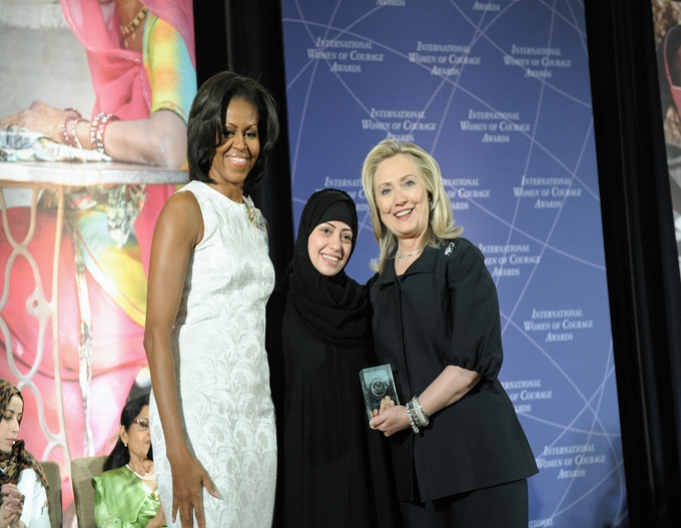 Saudi Arabia: The Courage Of One Woman Speaks For An Entire Nation

Samar Badawi looks a little forsaken on the big stage in Washington. Shyly, she listens to the noble words a world-famous figure is saying about her: “You are making a difference. And we thank you for that.” Then suddenly the small woman in black who hails from the Saudi Arabian port city of Jeddah is standing between Hillary Clinton and the world’s other most powerful woman, Michelle Obama.

Clinton’s words were part of the ceremony honoring those who won International Women of Courage Awards. Since 2007, ten women from around the world, selected from possible candidates whose names are sent in by U.S. embassies, are invited to Washington for the award ceremony. In 2012, other award winners came from Burma, Pakistan, Afghanistan and Colombia.

Each of these activists deserves an article like this one written about her: all the award-winners fight against discrimination, crime, corruption, and terror. But within this group of strong women, Samar Badawi is special because she manages to live – survive – in Saudi Arabia, which is probably the most misogynist country in the world.

Her life story is that of an oppressed woman treated sadistically, with every effort made to break her spirit, running headlong into the wall of Saudi society. She sued her own father – nothing short of a revolutionary act in country so corrupt, with its cronyism and nepotism, and so rigid, with its system of moral police and women watched over by guardians.

The 31-year-old divorced mother of a 10-year-old son has even sued the government in her fight for the right of women to vote and to drive cars. “Samar is a fighter, courageous and strong enough to take such a step. I take my hat off to her,” Saudi blogger and medical student Omaima al-Nadshar says.

To get some idea of the extreme pushback from Saudi men but also the elite that Badawi faces, a brief look into her daily life in this absolute monarchy is instructive. This is a country where every female, girl, teen, wife, grandmother, must have a male accompany her when she goes out in public. She cannot sit in a car without the guardian, go to a restaurant, much less on a trip.

A Saudi woman is dependent on a male guardian – father, husband, uncle, brother — for virtually everything. She needs his permission to marry or to get divorced; to go abroad; to receive an education; even for something as banal as opening a bank account.

Not to go along with this is dangerous for a woman. In 2009, for example, a father had his daughter committed to a mental institution because, against his will, she wanted to marry someone from a different tribe. The system leads to some strange configurations – as Wajeha al-Huwaider, a divorced woman, says: “If I want to marry again, I’ll have to ask my son’s permission.”

As a fighter on her own, Samar Badawi has by now had a lot of experience of Saudi’s male-dominated world. She has been arrested, sued, thrown into jail. Her crime: as a divorced woman of 30, and a mother, she didn’t obey her father, who — as an independent psychologist working for a family protection organization ascertained — was a drug-addicted paranoid psychopath with 14 wives.

“My mother died of cancer when I was 13,” says Badawi. “My father beat me regularly, yelled at me all the time, once even threw me out of the house.” Even after marriage and motherhood, he was constantly trying to run her life.

Getting divorced was already no small matter, since in Saudi Arabia it’s seen as a sign of rebellion against the patriarchal structure. It also meant that she was forced to move back into her father’s house, where the verbal and physical abuse started all over again.

Then came the day when she couldn’t stand it anymore. She took her child, went to a women’s shelter, and ended up suing her father. Badawi’s brother took her side, which is why she won the first court case. Her father appealed, and the second case was heard by a very conservative judge. Badawi was sent to prison.

Meanwhile, however, the case had won the attention of the international media. An Internet campaign was launched. The global campaign to free Badawi lasted for seven months, and in the end she was released and turned over to the care of an uncle.

“I went into jail a broken, wounded woman,” says Badawi. “But I emerged from it victorious, so proud of myself for having gotten through the ordeal. I had a lot of time to think about my father’s injustice, that dreadful judge, and of course my son – those were the times when I would weep.”

Samar Badawi’s fight is far from over. In fact, one could make the case that it’s just begun. For no sooner out of prison than she took up her next project: voting rights for Saudi women. She started last April, and a few months later King Abdullah announced that in 2015 women would be allowed to vote in local elections and that they would be eligible to sit in the Shura, the country’s Consultative Assembly.

It is not known to what extent Badawi’s commitment to the cause played a role in this revolutionary development. It is, however, clear that Badawi doesn’t think it’s enough. She wants to be able to drive, and has applied for a license. She pesters the Jeddah authorities about it on a daily basis, and writes complaining letters to the Ministry of the Interior.

Her arguments aren’t very difficult to understand. “I’m a working mother, and I don’t have a chauffeur,” she says. “What is more dangerous: getting into the car of someone I don’t know or sitting behind the wheel of my own vehicle?”

Badawi no longer has to fight alone: many women support her, and have turned the battle for the right to drive into a campaign called “Women to drive.” They drive illegally, mainly at night, have themselves filmed doing so and then put the videos on the Internet. They risk legal trouble and punishment for this – driving women are sentenced to ten lashes.

Badawi has also driven, and has the support of her second husband Waleed Abu Alkhair, a Cambridge jurist and human rights activist. “Our laws are fine,” Badawi says. “What’s missing is legal awareness and women with self-confidence.” King Abdullah should be proud to have subjects like her.

2 Responses to “Saudi Arabia: The Courage Of One Woman Speaks For An Entire Nation”