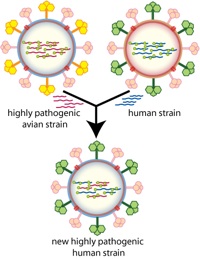 The word as virus: Myth-making in the syndication age

My general theory since 1971 has been that the Word is literally a virus, and that it has not been recognized as such because it has achieved a state of relatively stable symbiosis with its human host … the Word clearly bears the single identifying feature of virus: it is an organism with no internal function other than to replicate itself.
– William Seward Burroughs, The Adding Machine

Anyone who has ever played the child’s game of “Telephone” — also called “Chinese Whispers” — knows how readily the “grapevine” breeds distortion, as mistakes and deliberate misstatements can take on lives of their own. Often the mainstream news media acts as an adult version of this exercise in group error. In the system of mass news dissemination via major syndication agencies like Reuters and the Associated Press (AP), inaccuracies eventually become accepted “fact,” and mistake morphs into meme and myth. A sole news service like AP is like “Telephone” on steroids, as it can easily distribute a single falsehood to more than 15,000 subscribers who then accept it as fact. Herein danger lies; for, in these days of trial by media, one person’s fate and freedom may depend on a question as to which myth has more traction.

A cautionary example: in 1994, the AP fired its Washington bureau reporter Christopher Newton, after allegedly discovering that the journalist had fabricated scores of news sources over two years’ time. Noting that “Newton cited nonexistent academic sources at Harvard, Princeton, Penn, Vanderbilt, Chicago, Cal, Texas, Texas Tech, New Mexico, Colorado, and George Washington before a reference to a phantom Stanford source finally exposed him,” a writer at Slate.com speculated that Newton evaded earlier detection because of the banality of his fabrications: “Unlike onetime Slate contributor Jay Forman, who added lies to a story to make it sound more exciting, Newton took the opposite tack, making the stories less interesting—if that’s possible—by inserting insipid invented quotations that read like blurred type.”

But a less innocuous actor can do serious damage, especially when the mass dissemination of private agendas parades as “news reporting.” When, late last month, WikiLeaks began publishing its cache of over 5 million emails from the “global intelligence” corporation Stratfor, it also revealed that the would-be spy company “did secret deals with dozens of media organizations and journalists – from Reuters to the Kiev Post.” Although Reuters spokesman David Girardin disclaimed knowledge of specific collusion between his organization and Stratfor, another source observed that, since the dawn of the “war on terror,” Stratfor had become “a highly sought after informant for major Western media organizations like Bloomberg, Associated Press, Reuters, The New York Times, and the BBC.”

In announcing its news, the WikiLeaks press release continued: “While it is acceptable for journalists to swap information or be paid by other media organizations, because Stratfor is a private intelligence organization that services governments and private clients these relationships are corrupt or corrupting.” Certainly, the fact that Stratfor’s purported client roster heavily favors U.S. military and intelligence agencies — as well as private military contractors — may cause some to wonder whether some of the “news” reported from Stratfor to Reuters may be more accurately described as paid propaganda, which is then distributed daily to thousands of media outlets that then print the stories verbatim.

In fact, the hostility evident in the thousands of Stratfor emails discussing ways in which to destroy WikiLeaks and its founder Julian Assange may account for the virulence and oft-repeated distortions that have consistently accompanied widespread media reporting on WikiLeaks and Assange. Indeed, the apparent chain of command from the U.S. government, to Stratfor, to Reuters and other news services, and then to many thousands of subscribers, appears viral in nature — as misstatements repeated thousands of times infect even independent news sources. Common examples include blatant untruths (now widely accepted as fact) that Assange has been charged with a crime, and that his accusers are former WikiLeaks volunteers. A recent addition to this stable is a VEXNEWS blog post perpetuating the myth of Assange as an anarchic vagabond “wandering the world with a backpack, laptop and bad attitude, encouraging hackers to bust into confidential information networks and vigorously allegedly declining condom use with hand-picked Scandinavian groupies.” Ascribing the opinion of one WL Central journalist to the WikiLeaks organization, the same source also parrots the popular misperception that WikiLeaks and the WL Central blog are affiliated.

Since it has now become clear that this long-standing error has gone viral into myth, we at WL Central feel compelled to clarify that our blog is an independent group that is not directly associated with the WikiLeaks organization.

One Response to “Syndication Age News Stories: Mistakes Morphs into Meme and Myth”