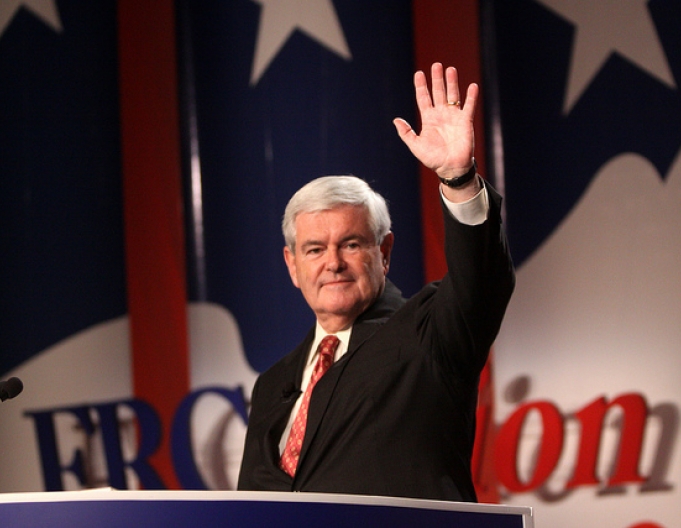 WASHINGTON – We’re licking our chops. If it was just for the serious matter of electing the “leader of the free world,” as they say (albeit less and less), the possibility of seeing Newt Gingrich become the Republican nominee for the November 2012 U.S. presidential elections would be just fine with us. But there’s more.

If we’re going to be covering the presidential race for a year (will the dauntless Obama succeed in beating those nasty Republicans?) we might as well have a real bad guy in the mix.

From that point of view, the longstanding favorite Mitt Romney doesn’t offer much for the press to sink its teeth into. The only thing to hold against him, Gail Collins complains in the New York Times, is that he once left for a vacation in Canada with the family dog attached to the roof of the car. And that was in 2007.

So let’s hear it for Newt! And let’s hope that he lasts longer than the others in the primary that has become what the Washington Post calls the “battle of the not-Romneys.”

Some are already saying Newt won’t last, that he’s not disciplined enough. It is true that in the early 1990s, when he was speaker of the House of Representatives, he was the greatest revolutionary tax-slayer in town; fast forward to today, where he’s practically the voice of reason by comparison with Tea Party extremists. In 2009, he made a climate change ad with Democrat Nancy Pelosi, and has made positive noises about mandatory health insurance for each and every American.

Newt is short for Newton. Maybe he’s thinking of Sir Isaac when he claims that he’s a “one-man think tank.” When, in 1997, he faced 84 ethics complaints the congressional investigating committee dug up a note in his handwriting that contained his own take on himself. It read: ‘Gingrich — primary mission, Advocate of civilization, Definer of civilization, Teacher of the rules of civilization, Arouser of those who fan civilization, .?.?. leader (possibly) of the civilizing forces.’?”

Gingrich grew up in France, where his adoptive father – a military man – was stationed. Given half a chance, he’ll compare himself to Charles de Gaulle, who also made a memorable political comeback.

Back in the United States, Gingrich studied history, and was an assistant history professor at a small college in Georgia before being elected to Congress. The big problem with the Republican party, he says, “is that we don’t encourage you to be nasty.” Candidates are supposed to be nice, loyal, faithful and  “all those Boy Scout words, which would be great around a campfire, but are lousy in politics.”

At 68, Newt Gingrich likes to present himself as an intellectual of the political class. He has written 21 books, 17 of them in the last eight years. At a time when no one, on the right or the left, stands out for their originality, he has some frankly unusual ideas — such as making low-income kids work as janitors in schools so they learn the value of work.

On the campaign trail, he introduces himself as the only adult in the Republican camp. “If we were serious, we would open up enough oil fields in the next year that the price of oil worldwide would collapse,” he admonished during the last television debate. “We defeated Nazi Germany, fascist Italy, and Imperial Japan in three years and eight months because we thought we were serious.”

Gingrich may see himself as an iconoclast, but his weaknesses couldn’t be more banal: money and women. On the financial side, among other sums of money, he pocketed $1.8 million from Freddie Mac, the bête noire of the right for the role it played in the sub-prime crisis, saying that it was for consulting work “as a historian.”

As far as women are concerned, he’s had the habit of proposing to women while still married to someone else. His first wife has recounted that he came to the hospital where she was recovering from cancer to get her to sign divorce papers. While married to wife number two, he had an affair with his congressional assistant Callista (23 years his junior) – even as he was taking the moral high ground in denouncing Bill Clinton’s dalliance with Monica Lewinsky. Conservative columnist Jennifer Rubin recently awarded him a “gold medal in hypocrisy.”

At the age of 10, Gingrich relentlessly lobbied city hall in Harrisburg, Pennsylvania, trying to convince municipal authorities to open a zoo. After having visited the World War I battle town of Verdun, France, when he was 15, he decided to devote his life to “understanding what it takes for a free people to survive.” At 19, he married his high school geometry teacher seven years his senior. He has always loved animals (last March, when Knut the polar bear died at Berlin Zoo, he posted his condolences on Twitter), and has stayed a fan of dinosaurs long past the usual age.

“There’s a large part of me that’s four years old,” he confided last year to Esquire magazine. “I wake up in the morning and I know that somewhere there’s a cookie. I dont know where it is but I know it’s mine and I have to go find it. My life is amazingly filled with fun.” Just imagine our own pleasure when the campaign ads start in on big bad Newt.