Old globes are comforting relics. They show how old rivalries and threats fade — just as today’s will do. 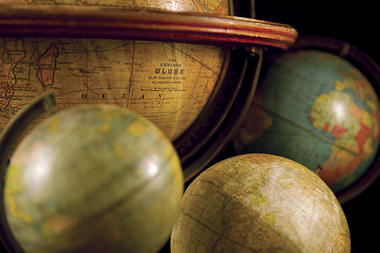 If you are looking for a date on a globe, you probably won’t find one. Most manufacturers want to preserve shelf life as long as possible. But half the fun of globes – especially old ones – is using your geographical knowledge to guess the date of birth. Boundaries are always shifting, empires rising and falling. The confident imprint that inhabitants of one era put on the world fades with time before vanishing altogether.

I have a small collection of globes picked up in ?second-hand shops and garage sales over the years. My favorite is a two-foot high Excelsior made by G.W. Bacon & Co. Ltd., 127 Strand, London. It rests on a brass cradle and has a honeyish patina. I imagine it fresh out of the box, sitting in a British shipping magnate’s office a century ago.

I’m guessing it dates to between 1908 and 1910. Belgium has not yet taken over the Congo Free State. The Cape Colony has not become the Union of South Africa. Japan has not yet renamed occupied Korea. Eastern Oklahoma is no longer designated as Indian Territory.

You can rotate the globe (careful, the paper gores are delicate) and experience the idea of the sun never setting on the British Empire. One hundred years ago, the plucky kingdom off Europe’s northwest coast laid claim to vast tracts of the planet – a third of Africa, swaths of the Arabian Peninsula, greater India, Australia, New Zealand, Canada.

The Union Jack was as familiar a sight to a globe-trotter as McDonald’s is today. Now, other than 14 tiny territorial dots – Gibraltar, Bermuda, South Georgia, and the like – sunset over Land’s End in Cornwall is pretty much it for a British day.

To old-school imperialists, romantics, and lovers of costume dramas, that may seem a little sad. But you can also derive comfort from examining a bygone world. All the wars and fears of that era – the clash of colonial powers, the imperious treatment of native peoples – have faded. When you take the long view, you can see that today’s passions over ideology, nationality, resources, and religion will eventually fade as well.

Old enmities die. Surprising alliances emerge. New ambitions flare.Between 1945 and 1990, the United States and its allies expended huge amounts of blood and treasure trying to stem the spread of communism. Globes of that era show the Soviet Union at its apogee. It takes nothing away from the seriousness of the cold war – the men and women who died in gulags or jungle wars, the relentless economic competition, the boldness of leaders ranging from John Kennedy to Ronald Reagan to Lech Walesa – to point out the happy fact that globes from that era are obsolete.

What about today’s big concerns? Let’s take two of them: the rise of China and the threat of militant Islam. We can’t know if China will continue to grow as a global power under central command or whether economic or political forces will change its course. Some economists are concerned about a Chinese bubble, about unoccupied office buildings and bullet trains with no passengers. Unrest also is stirring among the muzzled Chinese middle class.

Nor is it clear where the Muslim world is going in a year that has seen al Qaeda crippled and the sight of sectarian and secular Arabs together demanding freedom. Even in as thorny an entanglement as Afghanistan, there is reason for hope. All sides seem to understand that outright victory is unlikely. A future Afghan government probably will include the Taliban. A future Taliban probably will be less harsh than when it controlled the country in the 1990s.

That won’t be the end of the story. Coalitions collapse. Old passions and prejudices reassert themselves. Someone or some group will always stamp an imprint on the planet. But if you spin one of today’s globes in 2111, the concerns that demanded our attention will have long since faded. Mid-2011 might seem like a simpler, more romantic time.

John Yemma is the editor of The Christian Science Monitor.