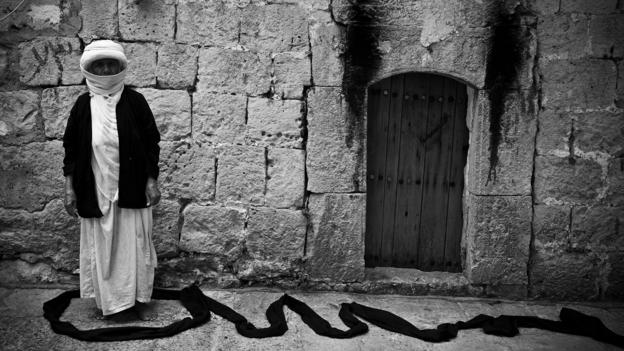 As Islamic State (IS) fighters continue to advance towards Baghdad, contemporary art in the region is probably the last thing on the minds of most Iraqis. And yet several gifted Iraqi artists are doggedly working in defiance of the bloodshed that has beset their country since the days of Saddam Hussein. This is what I discovered recently, when I visited the national pavilion of Iraq at the 56th Venice Biennale.

Organised by the Ruya Foundation for Contemporary Culture in Iraq, the exhibition in the pavilion has been curated by Philippe Van Cauteren, artistic director of the Museum for Contemporary Art in Ghent. To select the five artists in the show, Van Cauteren traveled across America, Belgium, Turkey and the UK as well as Iraq. In Iraq, he tells me, he found an isolated contemporary art scene characterized by narrow-mindedness and conservatism.

“During my research, I started to visit artists in Baghdad and I found that most of the artistic production in Iraq consists of pleasant paintings that deny the reality of what is going on in the country,” he explains. “These painters are guided by beauty and nostalgia. But from my perspective, they are absolutely uninteresting. I cannot understand why if you were an artist living in a country with the complexity of Iraq you would wish to paint flowers or the Tigris or Baghdad streets. I was looking for the 10% of artists who had the courage to engage with the current context.”

As a result, the artists whom Van Cauteren eventually chose for the exhibition, which he called Invisible Beauty to draw attention to the fact that they are off the radar for even informed Westerners, are all capable of work that can be unforgettably tough and hard-hitting. Take the brutal and haunting water colors of the young painter Haider Jabbar, who was born in 1986. Painted from the artist’s memories of shocking sights that he witnessed, these depict a series of decapitated young male heads, mostly blindfolded, bloodied and impaled upon stakes.

Each one represents a different victim of the conflict that has blighted Iraq in recent years, and Jabbar intends to paint 2,000 of them. Hanging on the walls of a beautiful 16th Century palazzo overlooking Venice’s Grand Canal, they appear stark and incongruous – a gruesome reminder of the urgent need to find a peaceful resolution to the conflict in the Middle East.

Although Jabbar was eventually forced to leave his homeland as a result of the conflict, ending up as a refugee in Turkey where he is based today, he is familiar with the nature of life for artists in Iraq. “It is not easy to work as a contemporary artist in Iraq,” he tells me by email. “To stay alive is the biggest challenge.”

According to Jabbar, there are only a handful of avant-garde artists in Baghdad, so the scene, such as it is, is extremely ‘limited’. Baghdad has only three ‘basic’ galleries and there is no funding for contemporary artists, who generally congregate in each other’s homes or the city’s coffee shops. Another centre for discussion is Baghdad’s Institute of Fine Arts, but the atmosphere of the college, which offers a classical education to young painters and sculptors, is decidedly old-fashioned.

With no access to art magazines, young artists trawl YouTube and hunt out information online to stay abreast of developments in contemporary art elsewhere in the world. But they can still feel out of touch. For a Western audience, Jabbar’s watercolours, for instance, immediately call to mind the distinctive style of the fashionable South African-born painter Marlene Dumas. Yet until he had met Van Cauteren, Jabbar had never heard of her, let alone seen her work.

Invisible Beauty also showcases Iraqi photography. In a new series of 28 black-and-white photographs specially created for the pavilion, Akam Shex Hadi, born in 1985, presents portraits of displaced ordinary Iraqis standing in a variety of settings. Each image also includes a length of sinister black fabric snaking through the composition and encircling the subject of the portrait like a noose. According to Shex Hadi, this black cord represents the IS flag.

While the Foundation has faced criticism for its ties to a controversial Iraqi dynasty, the pavilion offers a welcome showcase. Exhibiting at the Venice Biennale is important for Iraqi artists such as Shex Hadi because it means finding an audience for their work – something that is absent back home. “It’s not easy at all to have a career as an artist in Iraq,” he tells me, “because the view of Iraqis towards contemporary art is uninformed. The most difficult challenge is the public perception: the audience doesn’t understand, so it feels like my work is negated, as there is little appreciation. In any country suffering a crisis like Iraq, culture and art suffer the most. Only artists care about art.”

Of course, this wasn’t always the case: just look at the elegant images by Latif Al Ani, who was born in 1932 and has a reputation as the ‘founding father of Iraqi photography’. During the ‘50s and ‘60s, he enjoyed a successful career as a fine-art photographer: in 1963, a solo exhibition of 105 images by Al Ani toured America. Many of his photographs document Iraq’s mid-century transition towards modernity – in one memorable image, for example, a glamorous woman wearing sunglasses stands smiling beside a highway while a wizened shepherd passes by leading a huge flock. But Al Ani is also proud of his country’s ancient heritage, and several of his photographs record archaeological monuments. These images feel all the more precious today, as IS militants ransack and demolish archaeological sites across the Middle East.

“The Sumerians, Babylonians, all the way to the Abbasids – all the monuments and art they created, that gives me pride,” Al Ani says in the Invisible Beauty catalogue. “Iraq has a remarkable history. These cultures followed each other, civilisation after civilisation, and they were all over Iraq, in the north and the south… Then the retreat began. I wish we could go back to civilisation.”

In the face of the seemingly relentless advances of Islamic State, this may not sound like much. Nevertheless, it is heartening to hear that the courageous Iraqi artists exhibiting in Venice are still prepared to stand up for the forces of civilization.