FROM Seattle to Sydney, protesters have taken to the streets. Whether they are inspired by the Occupy Wall Street movement in New York or by the indignados in Madrid, they burn with dissatisfaction about the state of the economy, about the unfair way that the poor are paying for the sins of rich bankers, and in some cases about capitalism itself. 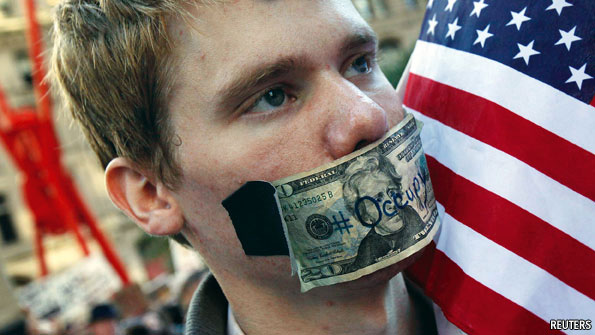 As intense protests spawned by Occupy Wall Street continue to grow, it is worth asking: Why now? The answer is not obvious. After all, severe income and wealth inequality have long plagued the United States. In fact, it could reasonably be claimed that this form of inequality is part of the design of the American foundation – indeed, an integral part of it.

Income inequality has worsened over the past several years and is at its highest level since the Great Depression. This is not, however, a new trend. Income inequality has been growing at rapid rates for three decades. As journalist Tim Noah described the process: “During the late 1980s and the late 1990s, the United States experienced two unprecedentedly long periods of sustained economic growth – the ‘seven fat years’ and the ‘long boom’. Yet from 1980 to 2005, more than 80 per cent of total increase in Americans’ income went to the top one per cent. Economic growth was more sluggish in the aughts [the first decade of the new century], but the decade saw productivity increase by about 20 per cent. Yet virtually none of the increase translated into wage growth at middle and lower incomes, an outcome that left many economists scratching their heads.”

The 2008 financial crisis exacerbated the trend, but not radically: the top one per cent of earners in the US have been feeding ever more greedily at the trough for decades.

In addition, substantial wealth inequality is so embedded in US political culture that, standing alone, it would not be sufficient to trigger citizen rage of the type we are finally witnessing. The American founders were clear that they viewed inequality in wealth, power, and prestige as not merely inevitable, but desirable and, for some, even divinely ordained. Jefferson praised “the natural aristocracy” as “the most precious gift of nature” for the “government of society”. John Adams concurred: “It already appears, that there must be in every society of men superiors and inferiors, because God has laid in the… course of nature the foundation of the distinction.”

Not only have the overwhelming majority of those in the US long acquiesced to vast income and wealth disparities, but some of those most oppressed by these outcomes have cheered it loudly. Americans have been inculcated not only to accept, but to revere those who are the greatest beneficiaries of this inequality.

In the 1980s, this paradox – whereby even those most trampled upon come to cheer those responsible for their state – became more firmly entrenched. That’s because it found a folksy, friendly face. Ronald Reagan, adept at feeding the populace a slew of Orwellian clichés that induced them to defend the interests of the wealthiest. “A rising tide,” as one former US president put it, “lifts all boats”. The sum of his wisdom being: It is in your interest when the rich get richer.

Implicit in this framework was the claim that inequality was justified and legitimate. The core propagandistic premise was that the rich were rich because they deserved to be. They innovated in industry, invented technologies, discovered cures, created jobs, took risks, and boldly found ways to improve our lives. In other words, they deserved to be enriched. Indeed, it was in our common interest to allow them to fly as high as possible, because that would increase their motivation to produce more, bestowing on us ever greater life-improving gifts.

Gratefulness for the leadership

We should not, so the thinking went, begrudge the multimillionaire living behind his 15-foot walls for his success; we should admire him. Corporate bosses deserved not our resentment but our gratitude. It was in our own interest not to demand more in taxes from the wealthiest but less, as their enhanced wealth – their pocket change – would trickle down in various ways to all of us.

This is the mentality that enabled massive growth in income and wealth inequality over the past several decades without much at all in the way of citizen protest. And yet something has indeed changed. It’s not that Americans suddenly woke up one day and decided that substantial income and wealth inequality are themselves unfair or intolerable. What changed was the perception of how that wealth was gotten and so of the ensuing inequality as legitimate.

Many Americans who once accepted or even cheered such inequality now see the gains of the richest as ill-gotten, as undeserved, as cheating. Most of all, the legal system that once served as the legitimising anchor for outcome inequality, the rule of law – that most basic of American ideals, that a common set of rules are equally applied to all – has now become irrevocably corrupted and is seen as such.

While the founders accepted outcome inequality, they emphasised – over and over – that its legitimacy hinged on subjecting everyone to the law’s mandates on an equal basis. Jefferson wrote that the essence of America would be that “the poorest labourer stood on equal ground with the wealthiest millionaire, and generally on a more favoured one whenever their rights seem to jar”. Benjamin Franklin warned that creating a privileged legal class would produce “total separation of affections, interests, political obligations, and all manner of connections” between the rulers and those they ruled. Tom Paine repeatedly railed against “counterfeit nobles”, those whose superior status was grounded not in merit but in unearned legal privilege.

After all, one of their principal grievances against the British king was his power to exempt his cronies from legal obligations. Almost every founder repeatedly warned that a failure to apply the law equally to the politically powerful and the rich would ensure a warped and unjust society. In many ways, that was their definition of tyranny.

Americans understand this implicitly. If you watch a competition among sprinters, you can accept that whoever crosses the finish line first is the superior runner. But only if all the competitors are bound by the same rules: everyone begins at the same starting line, is penalised for invading the lane of another runner, is barred from making physical contact or using performance-enhancing substances, and so on.

If some of the runners start ahead of others and have relationships with the judges that enable them to receive dispensation for violating the rules as they wish, then viewers understand that the outcome can no longer be considered legitimate. Once the process is seen as not only unfair but utterly corrupted, once it’s obvious that a common set of rules no longer binds all the competitors, the winner will be resented, not heralded.

That catches the mood of the US in 2011. It may not explain the Occupy Wall Street movement, but it helps explain why it has spread like wildfire and why so many Americans seem instantly to accept and support it. As was not true in recent decades, the American relationship with wealth inequality is in a state of rapid transformation.

It is now clearly understood that, rather than apply the law equally to all, Wall Street tycoons have engaged in egregious criminality – acts which destroyed the economic security of millions of people around the world – without experiencing the slightest legal repercussions. Giant financial institutions were caught red-handed engaging in massive, systematic fraud to foreclose on people’s homes and the reaction of the political class, led by the Obama administration, was to shield them from meaningful consequences. Rather than submit on an equal basis to the rules, through an oligarchical, democracy-subverting control of the political process, they now control the process of writing those rules and how they are applied.

Today, it is glaringly obvious to a wide range of those in the US that the wealth of the top one per cent is the byproduct not of risk-taking entrepreneurship, but of corrupted control of our legal and political systems. Thanks to this control, they can write laws that have no purpose than to abolish the few limits that still constrain them, as happened during the Wall Street deregulation orgy of the 1990s. They can retroactively immunise themselves for crimes they deliberately committed for profit, as happened when the 2008 Congress shielded the nation’s telecom giants for their role in Bush’s domestic warrantless eavesdropping programme.

It is equally obvious that they are using that power not to lift the boats of ordinary Americans, but to sink them. In short, Americans are now well aware of what the second-highest-ranking Democrat in the Senate, Illinois’s Dick Durbin, blurted out in 2009 about the body in which he serves: the banks “frankly own the place”.

If you were to assess the state of the union in 2011, you might sum it up this way: rather than being subjected to the rule of law, the nation’s most powerful oligarchs control the law and are so exempt from it; and increasing numbers of Americans understand that and are outraged. At exactly the same time that the nation’s elites enjoy legal immunity even for egregious crimes, ordinary Americans are being subjected to the world’s largest and one of its harshest penal states, under which they are unable to secure competent legal counsel and are harshly punished with lengthy prison terms for even trivial infractions.

In lieu of the rule of law – the equal application of rules to everyone – what we have now is a two-tiered justice system in which the powerful are immunised, while the powerless are punished with increasing mercilessness. As a guarantor of outcomes, the law has, by now, been so completely perverted that it is an incomparably potent weapon for entrenching inequality further, controlling the powerless, and ensuring corrupted outcomes.

The tide that was supposed to lift all ships has, in fact, left startling numbers of Americans underwater. In the process, we lost any sense that a common set of rules applies to everyone, and so there is no longer a legitimising anchor for the vast income and wealth inequalities that plague the nation.

That is what has changed, and a growing recognition of what it means is fuelling rising citizen anger and protest. The inequality under which so many suffer is not only vast, but illegitimate, rooted as it is in lawlessness and corruption. Obscuring that fact has long been the linchpin for inducing Americans to accept vast and growing inequalities. That fact is now too glaring to obscure any longer.