David Lynch has seared his vision across both popular and avant-garde culture. While many of his fans continue to wait for something new on big or small screen, the director stays busy in other media, including a “Works on Paper” book and an exhibit currently on display in Paris. 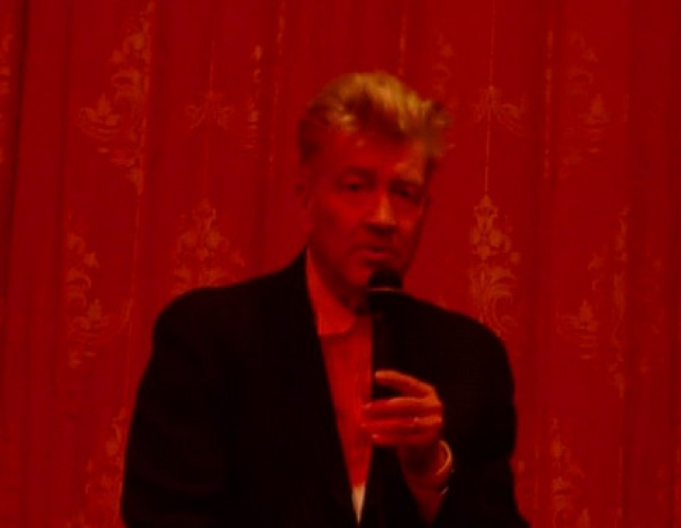 “Silencio”. Ten years ago, the movie Mulholland Driveended with this whispered word, which was also the name of the tavern where heroes shed rivers of tears, before finding the fateful blue box.

Silence is something the renowned American director David Lynch does not seem to want to stray too far from: he has just created the decor of a private club in Paris by the same name that opened its doors in late August. He has also published, at the initiative of the Cartier Foundation, a book without commentary or date, that consists of a portfolio of leaflets of his drawings that he’s been collecting for 40 years. As far as movies go, the director has been well ensconced in silence: Inland Empire is the only film by David Lynch since Mulholland Drive, and it was in 2006.

The filmmaker has not, however, entrenched himself in his bunker-like villa in Los Angeles. Back at the Fondation Cartier de L’art Contemporain in Paris, a space where David Lnych had previously unveiled his plastic works in 2007, he is currently involved in a group exhibition that is bringing together mathematicians and artists. For this exhibition he has designed an entire section, under the sign of the dome (or the igloo), that is set with a soundtrack he composed together with Patti Smith.

He also plans to show three short films he has made for the occasion. In early November, after a few forays into music, his first album titled Crazy Clown Time will be released. He also has regular postings of miniature films on his personal website, and has created Internet video spots where he can been seen chatting with a Barbie about his own brand of coffee.

On an entirely different note, through an austere-looking foundation, Lynch is also working to promote transcendental meditation, which he has long practiced, and has plans for a documentary on the subject.

But nothing has been announced in terms of future feature films, or even TV series along the lines of Twin Peaks, which he created in 1990, and that led to a decisive revival of the dark mystery genre. Rumors from Lynch fans online mention an animation project, Snootworld, and the possibility of Mulholland Drive 2.

One must not forget that Lynch has always been a multimedia artist, and film just one of many outlets for his creativity. He was able to comprehend the inner torment of viewers of Mullholland Drive all the more because he remained untouched by it himself. Back in Boston as a student of fine arts, he was not an obsessive cinephile and only tried doing movies to overcome his frustrations as a painter: he regretted that paintings did not emit sounds.

Hints of Hopper and Hockney (and Game Boy)

The Book “Works on Paper” is a testament to this early versatility in Lynch’s career. He uses all kinds of material for his drawings, from post-it notes, to matchbooks and napkins, with sketches in pencil, ink, felt-tip pen or black watercolor. The compilation is a striking display of graphic diversity, with gaunt medieval landscapes next to expressionist hachures, surreal hybrids, logos of cabalistic drawings, where hints of Hopper and Artaud cross paths with inspiration from Bacon and Hockney. One can find the doodle of a sea cow gently brushed against the script of an episode of “Twin Peaks”, next to a geometric flipper, as if Kandinsky had applied himself to Game Boy.

A multimedia artist he is beyond a doubt. With words, as with a story, there is always acting to be found. As in his paintings, Lynch often includes a sentence in his drawings as if to counterbalance a story, in the broadest sense. Sometimes it is just a single word, shining like radioactive pebbles, suggestive of talismans leading to larger visions, as can be seen in the details in the film Blue Velvet, simply thrown over a sheet: “beautiful beginning/ear/nude/brain tumor.” Viewed in its entirety, his works are like an incubator, where the artist lets go of his “fish”- the most common metaphor he employs to describe his ideas, only to then capture them again.

Whether or not he is directing movies, Lynch never seems to lose sight of cinematography. There it is, on paper, among other things, in perpetual motion, breaking up and reassembling, disfigured faces – Inland Empire’s twisting spasms, convulsing faces, a cloudy mix of granular pixels. Always be wary of tranquil waters and silences that endure.