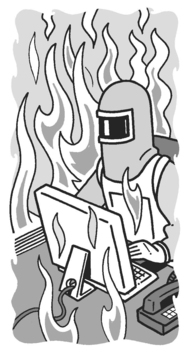 Why did Henry Blodget fire John Carney? I suspect that Carney himself will tell us soon enough. But the broad narrative of Foster Kamer’s post today rings true: it’s the age-old tension between the popular and the high-quality.

Now it’s worth remembering here that John Carney, for all his highbrow bona fides and thousand-word essays on whether Lehman executives deserve criminal prosecution, is entirely comfortable with lowbrow and populist fare. He helped launch Dealbreaker, he has an intuitive understanding for what kind of things generate traffic and pageviews, and he’s great at writing provocative headlines just crying out to be clicked on. Martin Wolf he is not.

Blodget wanted more sensational, pageview-grabbing posts and click-friendly features like galleries, while Carney wanted to put forth breaking news scoops that told a longer narrative. It was also speculated that Carney, one of the highest paid members on the Business Insider staff, wasn’t bringing the traffic numbers to sufficiently satisfy Henry Blodget.

Of course Carney wanted longer news scoops: that’s where the pro-blogging world is headed. Without them, it’s still possible to get traffic, especially if you have aggressive or deep-pocketed business-development people, but it becomes much harder to garner the kind of respect needed to be able to charge $20-$30 CPMs and start making some real money from ads. None of this should come as news to Blodget, so I wonder whether this is indicative of a conscious decision to move downmarket, or possibly of a cash crunch or pressure from The Business Insider’s investors to ramp up traffic and cashflow more aggressively. TBI is a venture-backed company, and its investors want a highly-profitable exit: that kind of business model has always been hard to square with building a strong franchise for the ages.

The mention of Carney’s salary is also indicative of a newfound focus on cashflow at TBI. There’s a finite number of name-brand financial bloggers out there, and when you hire one of those brands, you do so in large part for the respect that gives your franchise as a whole, rather than doing silly math about whether the ad revenue from his pageviews justifies his monthly paycheck. Blodget wants to be taken seriously as a financial news outlet: he wants to compete directly with the FT. And to be able to do that, he’s going to have to be able to hire talent. After today’s events, however, he’s going to find it extremely difficult to hire any respected financial journalist with a reasonably secure job.

Carney certainly has his idiosyncrasies, and he wouldn’t last a week at Bloomberg, but he’s perfectly open about them, and one of the great things about media companies in general and blog companies in particular is that they’re pretty good about letting the talent do what it needs to do, just so long as the stories keep coming. And Carney always kept the stories coming. What’s more, the beating heart of Clusterstock is the dynamic duo of Carney and Joe Weisenthal; now that he’s fired Carney, Blodget must know that he risks losing Weisenthal as well. If he loses them both, he’ll rapidly become something like 24/7 Wall Street or Minyanville: a site with lots of low-quality traffic and generally uninspiring editorial content. After all, left to his own devices, Blodget is prone to publishing silly and irrelevant stuff like this which is barely worth tweeting.

Kamer’s sources within TBI certainly don’t seem happy about this news, and on its face there’s a lot more downside than upside for Blodget in firing Carney. I don’t worry about John: he’s a huge talent who will certainly land on his feet. But if I was an investor in TBI, I’d be very worried about Blodget, and I’d be phoning him up right around now asking him what exactly he thinks he’s doing. Because this kind of thing is likely to lose him a lot of respect in the finance and media communities.