In this comic book image released by DC Comics, the cover of “Superman” No. 1, is shown. More than seven decades after Superman made his debut in “Action Comics,” DC says its longest-running comic book title will restart at No. 1 in September with a the Man of Steel sporting a full-blue look minus his long-standing red trunks. 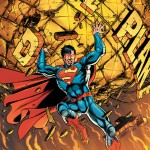 PHILADELPHIA — More than seven decades after Superman made his debut in “Action Comics,” DC said Friday the long-running title will restart at No. 1 in September with the Man of Steel sporting a full-blue suit sans his long-standing red trunks.

The publisher’s announcement, first reported by the Los Angeles Times on its website, also included details on new titles for Supergirl and Superboy, too, as well as a solo Superman series that will be written by George Perez and drawn by Jesus Merino.

The cover to “Superman” No. 1 shows the hero in a blue suit, red boots and cape and large “S” on his chest.

Perez reinvigorated Wonder Woman during a five-year run in the 1980s for DC. He also guided “The New Teen Titans” to success with writer Marv Wolfman. In 1985, he illustrated the company’s mammoth “Crisis On Infinite Earths” maxi-series that restructured the DC Universe.

“Action Comics” has been a cornerstone of DC’s comic titles and its first issue – published in June 1938 – featured the debut of Superman, aka Clark Kent, a mild-mannered newspaper reporter for The Daily Planet who was actually a Kryptonian raised by Kansas farming couple Jonathan and Martha Kent.

“Action Comics” is DC’s longest-running series in terms of issues, having reached No. 901 this month.

Since then, the character created by writer Jerry Siegel and artist Joe Schuster has become one of comics’ enduring icons, spawning radio and TV serials in the 1940s and 1950s and then films starring Christopher Reeve before returning to the small screen in “Lois and Clark: The New Adventures of Superman” in the 1990s and the just-concluded “Smallville,” which aired for 10 seasons.

DC said nothing about its plans for the new “Action Comics,” but revealed it will be written by Grant Morrison, whose gritty take on “Batman and Robin” and this year’s “Batman Inc.” has a reputation for revamping characters. Morrison also penned “All-Star Superman,” a 12-issue collection of tales that was made into an animated DVD.

Rags Morales, who has drawn “Identity Crisis” and “Countdown to Infinite Crisis” was tapped to illustrate the new “Action Comics.”

“Supergirl,” which will be written by Michael Green and Mike Johnson, and drawn by Mahmud Asrar, also features a new look, with the Kryptonian teen ditching the mini-skirt and midriff baring shirt in favor of a martial-inspired cape with boots.

“Superboy” will be written by Scott Lobdell and drawn by R.B. Silva and Rob Lean.

DC is launching 52 titles at No. 1 in late September featuring scores of its characters, including Wonder Woman, Green Lantern and the Justice League.