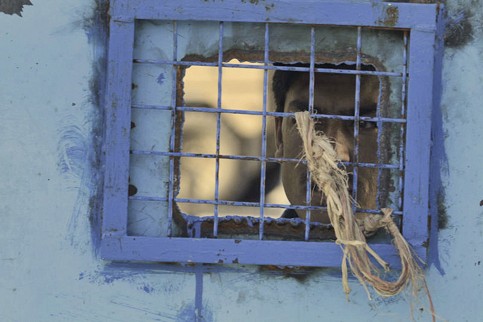 475 inmates slipped through this hole

Hundreds of prisoners have escaped from a prison in Kandahar, southern Afghanistan, many Taliban fighters. It was not the first time that a mass exodus succeeded.

A tunnel led to freedom: the Taliban in the southern Afghan Kandahar have organized a spectacular prison escape And Thus Allows more than one hundred insurgents to flight.

Photo: AP / DAPD in the southern Afghan Kandahar managed hundreds of insurgents through this hole to escape.

Photo: REUTERS The fugitives were in the …

Photo: REUTERS The head of the prison seemed perplexed.

Photo: AP / DPA The excavations are to be prison guards were not noticed in the of.

475 prisoners had escaped during the night and fog action by more than 300 meters long tunnel, said the head of the prison Sarposa, Ghulam Destageer Mayar.

Even hours after the mass exodus which the Authorities of the shock in his face. The Taliban had worked for months on the tunnel, said Governor Tooryalai Wesa.

“This can happen anywhere in the world”

The starting point was a house, had found from Which the insurgents in the way the political wing of the hospital. The fact that the excavations had remained unnoticed, partly due to the “official error” of intelligence and prison staff, which Wesa.

A spokesman for President Hamid Karzai called the flight a “severe blow”.

“This would never have happened.” The Authorities are now working to Determine the exact circumstances of the flight.

The tried for the prisons of the country Competent Justice Department, however, play down the serious incident. “This can happen anywhere in the world,” said Deputy Minister Mohammad Hashminsai, who was rushed from the capital Kabul to the south.

“We will take adequate precautions to Ensure That Such Things Do Happen not in the future.”

Taliban break out of prison

As Minister of concealed: Almost three years ago, in June 2008, there were from the same prison before a spectacular mass breakout. At that time, dozens of heavily armed insurgents attacked the prison on the outskirts of Kandahar and freed 400 comrades.

600 more prisoners took advantage of the situation so for flight. During this action, among other things blew up a suicide bomber the attackers the way through the main entrance. 18 people died, including 10 policemen.

In the region of Kandahar, meanwhile, a massive manhunt launched after what the fugitives. According to the security forces succeeded Governor Wesa in capturing the first break out again.

So what can the Afghan Sicherheitskäfte really afford?

The International Security Assistance Force offered to support the Afghan authorities. The prison was not run by the ISAF, so you do not know yet, have played the role of the escapees within the Taliban movement said the German general and Isaf spokesman Joseph Blotz. However, the incident was a “setback” in the fight against the insurgents.

Observers in Kabul see in the mass escape, a sign that Afghan army and police have long been unable, without assistance of ISAF to Ensure peace and order in the country. The countdown to the handover of security responsibility, however, is already the end of 2014th

Starting from July, the Afghan people in seven cities and provinces to take command of the ISAF. Among them is the northern Afghan city of Mazar-i-Sharif, for the present, the armed forces responsible. The Taliban offset could then focus on precisely these areas to the Afghan security forces to more blows.