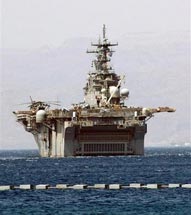 As we first reported, in an article that was met with much original skepticism, the Pentagon has now confirmed that a fleet of 12 warships has passed the Suez Canal, and is now likely awaiting orders to support the escalation in the Persian Gulf. The attached image from shows the latest positioning of US aircraft carrier groups as of June 23: the USS Harry Truman (CVN-75) is now right next to USS Eisenhower (CVN 69), both of which are waiting patiently just off Iran. As for the catalyst the two carriers may be anticipating, we provide the following update from the Gulf Daily News where we read that Israel may be on the verge of an attack of Iran, with an incursion originating from military bases in Azerbaijan and Georgia.

Israel is massing warplanes in the Caucasus for an attack on Iran, it was revealed yesterday.

Israel was, in fact, training pilots in Turkey to launch the strike and was smuggling planes into Georgia using Turkish airspace, they said.

However, Turkey was unaware of Israel’s intention of transferring the planes to Georgia, the sources said.

The unexpected crisis between Israel and Turkey following an Israeli commando raid on an aid flotilla bound for Gaza Strip hit Israeli calculations.

Azerbaijan-based intelligence units, working under the cover of technicians, trainers and consultants, have helped with the preparations, the sources said.

Military equipment, mostly supplied by the US, was transported to a Georgian port via the Black Sea.

Georgian coastguard and Israeli controllers are co-operating to hide the operations from Russian vessels, said the sources.

They point out that according to Israel, it will not be in a position to launch a strike on Iran without using bases in Georgia and Azerbaijan due to the limited capabilities of its nuclear submarines stationed near the Iranian coast.

Meanwhile, Iran’s Press TV reported that a very large contingent of US ground forces had massed in Azerbaijan, near the Iranian border. The independent Azerbaijani news website Trend confirmed the report.

Those reports came just days after the Pentagon confirmed that an unusually large fleet of US warships had indeed passed through Egypt’s Suez Canal en route to the Gulf. At least one Israeli warship reportedly joined the American armada.

Press TV also quoted Iranian Revolultionary Guard Brigadier General Mehdi Moini as saying that the country’s forces are mobilised and ready to face Israelli and American “misadventures” near its borders.

* Iran last night said it has cancelled plans to send an aid ship to the Gaza Strip as Israel “had sent a letter to the UN saying that the presence of Iranian and Lebanese ships in the Gaza area will be considered a declaration of war on that regime and it will confront it,” Irna said. 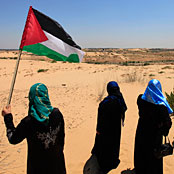 The Gulf Daily News, largely dismissed by Western observers, did not mention any Saudi involvement but said Israel is preparing to attack Iranian targets from the former Soviet republics of Azerbaijan and Georgia.

The claims that Israel may be preparing for an assault on Iranian nuclear facilities were strengthened this weekend by Italian Prime Minister Silvio Berlusconi, who told reporters at the G8 summit in Canada that G8 leaders “believe absolutely” that Israel will “probably” strike Iran.

“Iran is not guaranteeing a peaceful production of nuclear power [so] the members of the G8 are worried and believe absolutely that Israel will probably react preemptively,” Berlusconi said, as quoted at Ha’aretz.

CIA director Leon Panetta said Sunday that Iran has enough enriched uranium to build two nuclear bombs. In an interview on ABC’s This Week, Panetta also said he believed the recent spate of international and US sanctions against Iran will not convince the country to change course on its nuclear program.

“Will it deter them from their ambitions with regards to nuclear capability? Probably not,” Panetta said.