The U.S. officials declined to elaborate on the threat, citing classified intelligence. 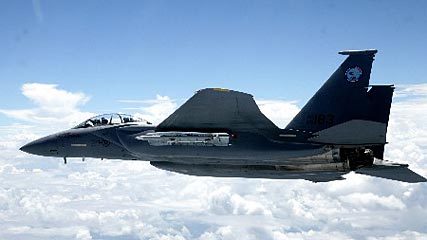 Working under extraordinary secrecy, the U.S. and Kazakh governments in the past year have moved nuclear material that could have been used to make more than 770 bombs from a location feared vulnerable to terrorist attack to a new high-security facility.

In the largest such operation ever mounted, U.S. and Kazakh officials transferred 11 tons of highly enriched uranium and 3 tons of plutonium some 1,890 miles by rail and road across the Central Asian country.

The transfer culminated a project spanning three American presidencies that was intended to prevent the material from falling into the wrong hands.

The last of 12 shipments arrived Monday at the new state-of-the-art storage facility in remote northeastern Kazakhstan, near the border with Russia and China. The 13-day journey began at the mothballed BN-350 fast-breeder reactor in the Caspian Sea port of Aktau.

“The most immediate and extreme threat (to international security) is a terrorist acquiring nuclear material,” said Thomas D’Agostino, the head of the U.S. National Nuclear Security Administration, the overseer of the U.S. nuclear arsenal. “This takes one of those pieces, a big chunk, off the table.”

The sparsely populated region where the storage facility is also is home to the defunct Semipalatinsk Test Site, a 7,000-square-mile expanse of steppe where the Soviet Union conducted more than 460 nuclear test explosions from 1949 to 1990 while Kazakhstan was a Soviet republic.

“The project is a very significant technical achievement,” D’Agostino said in an interview Nov. 8 that agreed to embargo until the operation was completed. “This isn’t stuff you just put on a truck and drive across a country.”

“The cost is very, very small compared to the cost of the wrong people getting their hands” on the material, asserted a U.S. official who spoke only on the condition of anonymity because he wasn’t authorized to discuss the project publicly.

Former President Bill Clinton began the project in 1996, when the U.S. helped Kazakhstan inventory the spent nuclear fuel that had accumulated at BN-350, which started producing plutonium for Soviet nuclear weapons in 1972. The reactor also provided power to Aktau.

The year before the project commenced, Kazakhstan had returned 1,410 nuclear warheads to Moscow that it inherited when the Soviet Union collapsed in 1991.

U.S. experts helped shut down BN-350 in 1999 and build a storage facility there until a more secure site could be found for nearly 3,000 assemblies that contained more than 140 tons of spent fuel. The spent fuel included the 14 tons of plutonium and highly enriched uranium, the largest stock of such materials outside the world’s nuclear-armed countries. 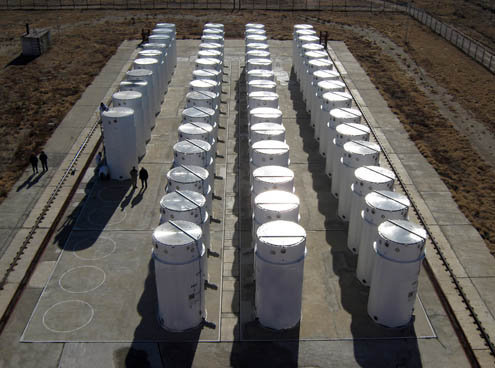 “We needed to ensure their physical security until we could decide where it could be stored,” said a second U.S. official, who requested anonymity because of the project’s sensitivity. “There were no monitoring systems, only some physical security, but it did not meet IAEA standards,” a reference to the International Atomic Energy Agency.

Under former President George W. Bush, Kazakh President Nursultan Nazarbayev’s government agreed to build the new storage facility at the opposite end of the country from Aktau because “they were nervous over the threat of nuclear sabotage” at BN-350, the second U.S. official continued.

The U.S. officials declined to elaborate on the threat, citing classified intelligence.

Aktau, however, sits directly across the Caspian Sea from Russia’s Northern Caucasus region, where al Qaida-linked Islamic separatists are engaged in insurgencies in the republics of Dagestan and Chechnya.

Nazarbayev and President Barak Obama reaffirmed a goal of completing the transfer operation this year when they met in Washington in April during an international conference that Obama called as part of an initiative to secure the world’s vulnerable stocks of highly enriched uranium and plutonium by 2013, U.S. officials said.

The U.S. and Kazakhstan went to extraordinary lengths to ensure the safety and security of the operation. Engineers designed and built huge cranes, massive storage casks, special railcars and the new storage facility behind fences, gun towers and other security layers.

Special handling facilities had to be constructed at BN-350 and at the railhead where the casks were unloaded onto trucks for the drive to the storage site. Interior Ministry guards and armored personnel carriers protected the convoys.

Train tracks and roads had to be upgraded to bear the weight of the 110-ton casks, command centers and communications networks were set up and Kazakh Interior Ministry troops underwent five weeks of training at the Sandia National Laboratories in New Mexico, which designs safeguards for the U.S. nuclear arsenal.

Other U.S. nuclear laboratories, including facilities in Idaho, Tennessee and South Carolina, and the Vienna-based IAEA contributed expertise and experts, U.S. officials said.

A dry run was held last November in minus 40-degree temperatures, and the lessons learned were incorporated into the final procedures.

“We had to examine the hydraulic fluid in the cranes and other machinery to make sure it would withstand the low temperatures,” the second knowledgeable U.S. official said. “We took every precaution we possibly could.”

For instance, the massive storage casks, built in Ukraine and Russia, each have two bolted-on seals and a third seal welded on, and they were secured inside the railcars with a special locking mechanism, the U.S. official said.

“Even if the guards could not protect the convoys and terrorists were able to get to the casks, it would have taken hours to get to the material,” the official said.

The IAEA has licensed the new facility for 50 years, taking pressure off Kazakhstan to decide the materials’ final disposition. It could reap commercial benefits from the highly enriched uranium, which can be “blended down” into commercial reactor fuel, U.S. officials said.

Before the Kazakhstan operation, the National Nuclear Security Administration, an arm of the Department of Energy, helped relocate more than 2.75 tons of weapons-grade highly enriched uranium and plutonium, most of it of Soviet and U.S. origin, to secure sites around the world.

Until Kazakhstan, the largest transfer operation returned nearly 1,000 pounds of highly enriched uranium — enough for 18 bombs — to Russia from Poland, a project that was completed in September.