China has been helped by Israel, which sold China anti-radar drones in the 1990s—to the fury of the Pentagon, which has since blocked the Israelis from providing upgrades. 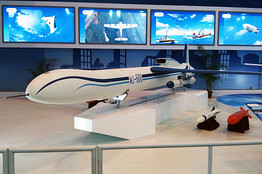 Western defense officials and experts were surprised to see more than 25 different Chinese models of the unmanned aircraft, known as UAVs, on display at this week’s Zhuhai air show in this southern Chinese city. It was a record number for a country that unveiled its first concept UAVs at the same air show only four years ago, and put a handful on display at the last one in 2008.

The apparent progress in UAVs is a stark sign of China’s ambition to upgrade its massive military as its global political and economic clout grows.
The U.S. and Israel are currently the world leaders in developing such pilotless drones, which have played a major role in the wars in Iraq and Afghanistan, and which analysts say could one day replace the fighter jet.

This year’s models in Zhuhai included several designed to fire missiles, and one powered by a jet engine, meaning it could—in theory—fly faster than the propeller-powered Predator and Reaper drones that the U.S. has used in Iraq, Afghanistan and Pakistan. 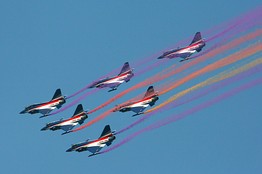 Exhibitors didn’t give precise details of which Chinese drones were fully operational, although one confirmed that the People’s Liberation Army, or PLA, had deployed at least two propeller-powered reconnaissance UAVs, which featured in last year’s 60th National Day parade.

But the large number of UAVs on display illustrates clearly that China is investing considerable time and money to develop drone technology, and is actively promoting its products on the international market.

That has implications for China’s external and domestic security, as well as for many other countries, including Iran, that have sought in vain to acquire drones either for military purposes or for police surveillance and antiterrorist operations.

It is of particular concern to the U.S. and Israel, whose drones are unrivalled in the world today, and could worry China’s neighbors, many of which have territorial disputes with China in the East and South China seas.

China’s apparent progress is likely to spur others, especially India and Japan, to accelerate their own UAV development or acquisition programs.

U.S. anxiety about China’s UAVs were highlighted in a report released Wednesday by the U.S.-China Economic and Security Review Commission, which was formed by Congress in 2000 to assess the national security implications of trade and economic relations with China.

“The PLA Air Force has deployed several types of unmanned aerial vehicles for both reconnaissance and combat purposes,” the report said. “In addition, China is developing a variety of medium- and high-altitude long-endurance unmanned vehicles, which when deployed, will expand the PLA Air Force’s ‘options for long-range reconnaissance and strike,’ ” it said, citing an earlier Pentagon report.

Military and aviation experts said China’s drones are still probably several years behind U.S. and Israeli models, noting that many countries have tried and failed to develop their own UAVs. But they also said that China is catching up fast in other areas of civil and military aviation technology, thanks in large part to technology transferred by foreign aerospace companies in Chinese joint ventures.

They suggested, too, that China had been helped by Israel, which sold China antiradar drones in the 1990s—to the fury of the Pentagon, which has since blocked the Israelis from providing upgrades.

The Chinese drone of greatest potential concern to the U.S. is the one with several missiles and a jet engine—called the WJ600—which was displayed by China Aerospace Science & Industry Corp., or Casic, one of China’s top weapons makers.

Casic officials declined to comment, but a video and a two-dimensional display by the company showed Chinese forces using the WJ600 to help attack what appeared to be a U.S. aircraft carrier steaming toward an island off China’s coast that many visitors assumed to be Taiwan.

Company officials said that and the other ASN models were all in production, but not yet all on the market, and most could be used for military operations as well as civilian ones such as monitoring electricity pylons and oil and gas pipelines.

One model under development was the ASN-211, which is about the size of a large duck and has flapping wings. It is designed primarily for carrying out reconnaissance behind enemy lines.

“I can’t tell you which models we have sold overseas, as that’s secret, but of course we’re interested in exporting them,” said one of the company officials. “That’s why we’re displaying them here.”