Lethal active Merapi volcano erupted Wednesday, after spewing lava and smoke for more than a week. The volcano’s first blast came a day after a major earthquake hit the country, triggering a tsunami and killing hundreds. 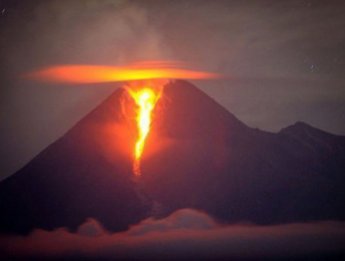 A deadly Indonesian volcano spewing lava and smoke for more than a week erupted Wednesday with its biggest blast yet, shooting searing ash miles into the air as soldiers hastily evacuated villages and emergency shelters.

One scientist warned the worst may be yet to come.

Women screamed and children cried as they were loaded into trucks while rocks and debris rained from the sky. Several abandoned homes were set ablaze and the carcasses of incinerated cattle littered the scorched slopes.

No new casualties were reported immediately after the booming explosion, which lasted more than an hour.

“This is an extraordinary eruption, triple from the first” on Oct. 26, said Surono, a state volcanologist.

More than 70,000 villagers have been evacuated from the 9,700-foot (3,000-meter) Mount Merapi’s once-fertile slopes since it began erupting just over a week ago, killing 38 people and injuring dozens, most with severe burns.

Almost all have packed into crowded camps well away from the base.

Djarot Nugroho, the head of Central Java’s disaster management agency, said funding for the refugees would run out in five days unless a national disaster was declared.

There have been more than a dozen strong blasts in recent days – including a smaller one Wednesday morning – prompting some scientists earlier to say pressure building up behind a magma dome in the crater was slowly easing.

By nightfall, however, all bets were off.

“We have no idea what’s happening now,” said Surono, a state volcanologist and among those who had been predicting a drop in activity. “It looks like we may be entering an even worse stage now. … It’s up to Merapi from here.”

The danger zone was widened from six miles to nine (10 kilometers to 15) from the glowing crater because of the heightened threat. Soldiers and police blocked all roads leading up the mountain, shooing away television crews and reporters.

“I (didn’t) think of anything else except to save my wife and son. We left my house and everything,” said Tentrem Wahono, 50, who lives in Kaliurang village, about six miles (10 kilometers) from the peak.

He and his family fled on a motorbike, “racing with the explosive sounds as the searing ash chased us from behind.”

The last eruption, which occurred during a heavy downpour, raised Merapi’s status to “crisis” condition, said Andi Arief, a staffer in the presidential office dealing with the disaster.

Merapi, one of the world’s most active volcanoes, has erupted many times in the last century, killing more than 1,400 people.

Indonesia, a vast archipelago of 235 million people, is prone to earthquakes and volcanos because it sits along the Pacific “Ring of Fire,” a horseshoe-shaped string of faults that lines the Pacific.

As a reminder of that, a 6.0-magnitude quake hit waters off the eastern province of Papua on Wednesday evening, rattling several villages but causing no known damage or casualties. At the time, U.S. Secretary of State Hillary Rodham Clinton was wrapping up a visit to Papua New Guinea – on the same island as Papua province. She was in the capital, about 1,000 miles (1,600 kilometers) to the east of the epicenter, and unlikely to have felt any shaking.

The volcano’s initial Oct. 26 blast occurred less than 24 hours after a towering tsunami slammed into remote islands on the western end of the country, sweeping entire villages to sea and killing at least 428 people.

There, too, thousands of people were displaced, many living in government camps.

In both cases, relief operations are expected to take weeks, possibly months.

Helicopters and boats were delivering aid to tsunami survivors in the most distant Mentawai islands, more than 800 miles (1,300 kilometers) west of the volcano.

The islands, popular among surfers, lie almost directly over the fault that spawned the 2004 Indian Ocean monster quake and wave.

There has been talk in recent days about relocating villagers away from vulnerable coastlines.

“I’m all for it,” said Regen, who lives on Pagai Utara island and goes by one name. “We’re all terrified now, especially at night, and wouldn’t mind moving further inland.”