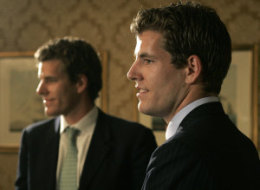 Just days after the New Yorker published a profile of Facebook co-founder and CEO Mark Zuckerberg, the New York Post posted a lengthy, exclusive interview with Tyler Winklevoss, who, together with his twin brother Cameron, has been fighting Facebook in court.

The Post describes the Harvard University graduates (both Olympic rowers) as “gorgeous, lantern-jawed hunks” who are “Facebook’s worst enemies.”

The Winklevoss-Zuckerberg saga started in November 2003, when the twins and another Harvard peer, asked Zuckerberg (then still at Harvard) to help them write the code for a social networking site, Harvard Connection, they were looking to start. “But after Zuckerberg verbally agreed to finish the Harvard Connection site, the brothers claim that he hedged and delayed on his work — and then came out with a competitor, ‘thefacebook.com,'” the Post explains. “After sending an immediate cease and desist to Zuckerberg, which he ignored, they sued in 2004. They finally reached a settlement reportedly valued at $65 million, but the brothers are now appealing for more, claiming Facebook initially misled them about the value of the site.”

The tumultuous relationship between Zuckerberg and the Winklevoss twins is the focus of the hotly-anticipated forthcoming movie, “The Social Network.”

On Aaron Sorkin’s script for “The Social Network:”

I thought it was really well written. I think again, a lot of the overarching themes held true. I think that we are guys who were trying to do the right thing. We are trying to right a wrong, and you know get back to what’s fair, and so in that sense I thought it was OK. So that was my initial thought.

Mark Zuckerberg is a guy who wants to change privacy. He wants to create a more transparent world, and yet he remains, and Facebook remains one of the least transparent companies, at least in our dealings with them. The IM messages that were his messages around that time about the first days of the Facebook creation and Harvard Connection, they have been transcribed, some of them, by the Business Insider. Now in the New Yorker article, they admit to having found them, and they refuse to release them publicly. They have fought endlessly to keep them from us, and they have completely, in my opinion, surpressed them and deep-sixed the smoking gun documents.

Yeah there was a while where ConnectU and Facebook were competitors, and we didn’t feel it was correct to be on [Facebook]. But then it was just so clear that what we allege was the first mover advantage and the premeditated sandbagging of our site was actually so successful that ConnectU could not make up the lost distance. And no one for that matter has either. By 2008 we had already lost that battle. It just wasn’t going to happen […]

On being labeled a “jock” who is fighting a “geek:”

I think that’s what a lot of people had difficulty with. ‘These guys are sportsmen. Zuckerberg should have the idea.’ But they had trouble digesting and accepting, ‘Well maybe he didn’t have the idea but he took it from these guys who are sportsmen but who maybe also have good ideas.’ I think some people early on before more documents and evidence came to light really had trouble wrapping their minds around and accepting that.I feel that I’m a more dynamic individual than the athlete who eats a lot. It kind of perpetuates this idea that you can’t do more than one thing well. And that’s when you start putting limits on what you can do, and it’s dangerous

On coverage of his lawsuit against Facebook and getting attacked as “Facebook’s bitches”:

A lot of people want to play armchair lawyer. If you can survive the blogosphere, you’re sort of ready for anything. […] There was stuff that you wouldn’t want written about you written about us. But it’s just the name of the game. It doesn’t bother me. I’m not losing sleep over it. It’s just again, something that had never happened before. You just sort of have to get used to the fact that, wow there are people who will put a pen to paper on a subject they haven’t researched at all.