The role of Latinos in American society is growing inexorably, with big political implications for the future 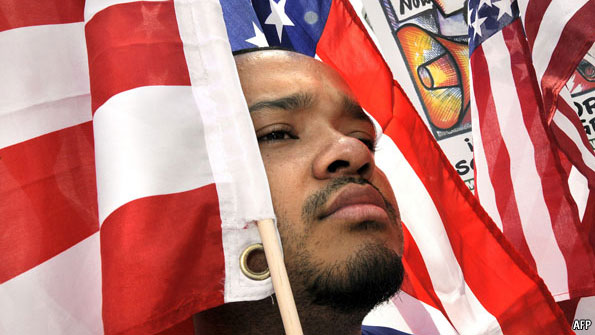 SWEEPING his hand in all directions, from the Mormon Temple to Utah’s State Capitol and the Great Salt Lake, Tony Yapias, the director of the Proyecto Latino de Utah and a leading Hispanic activist in the state, cannot suppress a smirk. “This was Mexico,” he says. In 1847, when the Mormon pioneers arrived, “no one asked Brigham Young for his papers.”

But today, Mr Yapias says ruefully, it is the Mexicans and Chicanos (American citizens of Mexican ancestry), as well as other Latinos such as himself (born in Peru), who tend to be asked for papers. And the Americans doing the asking are likely to be “Anglos”, as non-Hispanic whites are often called. This, certainly, is the tenor of SB1070, an Arizona law passed this year (but partially blocked by a federal judge) that aims to get tough on illegal immigrants, and of similar legislation likely to pass in states such as Utah.

Mr Yapias captures the complicated role of Latinos in America. They, their culture and their language were a big part of America’s past. They were then marginalised for a century and a half, when Anglos dominated American society and culture. And they are now bound to play a big role in America’s future. In 2009 there were 48.4m Hispanics in America, almost 16% of the population. By 2050, estimates the Pew Research Centre, Hispanics will be 29% of the population and whites will be a minority at 47%. In cities and in schools, whites will become a minority a lot sooner.

The intertwined history of America and Mexico and their common border make Hispanics a somewhat different demographic group than, say, Irish or Italian immigrants used to be. On the one hand, many Latinos are not only citizens but have deeper roots in what is now America than many Anglos do. Leticia Van de Putte, a Texas state senator from San Antonio with relatives on both sides of the border, points out that “our family was there when it was Spain, when it was France, when it was Mexico, the Republic of Texas, the United States, the Confederacy. Our family’s always been in the same place; it was the damn government that kept changing.”

And yet Latinos are also disproportionately likely to be in America illegally. Some 80% of the 11.1m illegal immigrants in America as of last year are from Latin America, and 60% are from Mexico alone, according to the Pew Hispanic Centre. Many of them live in the shadows of American society. They harvest American crops, build American houses and baby-sit American children, but often cannot get driving licences or social benefits.

And they are vulnerable. They fear people like Joe Arpaio, the sheriff of Arizona’s Maricopa County, which contains Phoenix. Mr Arpaio regularly sweeps up illegal immigrants and throws them into prison tents in the desert, even making them wear pink underwear for effect. Federal prosecutors last week sued Mr Arpaio for refusing to co-operate with investigations into his targeting of Hispanic-looking individuals in his raids, but Mr Arpaio is defiant. “I want them to know it’s 130 degrees (54°C) in those tents,” he tells The Economist.

The topic of illegal immigration dominates the politics of Latinos in America, whether they are native born or not. “We’re all mixed,” says Antonio Gonzalez, the president of the South-West Voter Registration Education Project, which tries to mobilise Latinos politically. For example, his own family (eight generations on his father’s side, six on his mother’s) has been on the land “since before the US invaded it”, and yet he is married to a first-generation immigrant and has undocumented immigrants in his social circle.

This is pushing Latinos away from the Republican Party, which they view as hostile to immigrants, and toward the Democrats by default. But Julian Castro, the young Latino and Democratic mayor of San Antonio, which is 60% Hispanic, says Democrats should not take Latinos for granted. They tend to support better public education and health care, but are socially conservative and religious. And they can accept Republicans of the sort that George Bush was as governor of Texas and as president, when he was accommodating toward immigrants.

In terms of the political clout of Latinos, the future has already arrived in states like Texas and California, which have large populations of both Latino citizens and illegal immigrants. As a share of the electorate, Latinos still lag behind their share of the overall population. But as more of them register to vote or come of age, they influence policy more every year. California’s lieutenant-governor and Assembly speaker are Latino, as are many mayors (including the mayor of Los Angeles) and members of school boards.

Indirectly, Latinos even influence Republican politics in California. Thus Meg Whitman indulged in harsh rhetoric against illegal immigrants while she was running in the Republican primaries for governor this year, but did a volte-face as soon as she advanced to the general election and faced the entire electorate. She now woos Latinos with Spanish-language ads, opposes Arizona’s immigration law and worked behind the scenes to prevent the state’s Republican Party from endorsing SB1070.

Elsewhere, change will take longer. Illegal immigrants are now increasingly bypassing their traditional destinations of California and Texas and moving instead to states such as Arizona, Georgia and North Carolina, which collectively had 10% of America’s undocumented aliens in 2009, up from 4% in 1990. Domestic Latino migration to these states and the high fertility of Latino families are adding to the numbers there. Arizona’s Latino population has almost tripled in the past two decades, with the majority of whites declining from 72% to 57%. But these numbers may take a long time to translate into political power of the sort that Latinos enjoy in California and Texas. Because so many of them are undocumented or too young, Latinos elsewhere don’t vote much—so far.

Yet it is illegal immigration, not the legal kind, that has been the hottest topic in Arizona this year—oddly, perhaps, since the number of illegals has dropped sharply because of the recession and tighter enforcement. Senator John McCain, once a stalwart proponent of a more moderate immigration policy, turned himself into an immigration hawk to parry a challenge in the Republican primaries. And though federal judges may find fault with SB1070, a poll released by Arizona State University recently found 81% of the state’s registered voters in favour of requiring people to produce documents to prove that they are in the country legally, and 74% agreeing that police should be allowed to detain anyone unable to prove their status.

And so America’s browning may come to rival its greying in determining its political fault-lines for generations to come. The greying will change American politics once ageing baby-boomers begin draining government pensions (Social Security) and health care (Medicare) and adding to the tax burden on younger Americans. The browning will change the look, sound and taste of America, and eventually the immigration debate. “How many people do you allow to die in the deserts of the south-west?”, asks Ms Van de Putte.

Arturo Rodríguez, the president of the (very Hispanic) United Farm Workers union and son-in-law of César Chávez, the founder of that union and the equivalent of Martin Luther King to Chicanos, recognises that Latinos are probably changing America more visibly than the Italians, Irish, Chinese or Germans did. This, he said, will cause some Anglos anxiety. But, he adds, a backlash against immigrants who are among the most downtrodden in the world is the wrong answer, and one that his movement will fight. “In the long run we’ll win,” he says. “Why? Because we have the numbers.