Cuba’s leader Fidel Castro delivers a speech to students outside Havana’s University in Havana, Cuba, Friday, Sept. 3, 2010. Castro dusted off his military fatigues for the first time since stepping down as president four years ago, a symbolic act in a Communist country where little signals often carry enormous significance.(AP Photo/Javier Galeano) 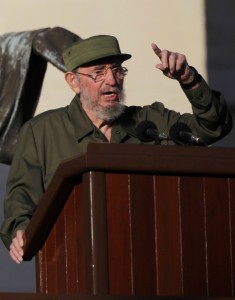 A couple of weeks ago, while I was on vacation, my cell phone rang; it was Jorge Bolanos, the head of the Cuban Interest Section (we of course don’t have diplomatic relations with Cuba) in Washington. “I have a message for you from Fidel,” he said. This made me sit up straight. “He has read your Atlantic article about Iran and Israel. He invites you to Havana on Sunday to discuss the article.” I am always eager, of course, to interact with readers of The Atlantic, so I called a friend at the Council on Foreign Relations, Julia Sweig, who is a preeminent expert on Cuba and Latin America: “Road trip,” I said.

I quickly departed the People’s Republic of Martha’s Vineyard for Fidel’s more tropical socialist island paradise. Despite the self-defeating American ban on travel to Cuba, both Julia and I, as journalists and researchers, qualified for a State Department exemption. The charter flight from Miami was bursting with Cuban-Americans carrying flat-screen televisions and computers for their technologically-bereft families. Fifty minutes after take-off, we arrived at the mostly-empty Jose Marti International Airport. Fidel’s people met us on the tarmac (despite giving up his formal role as commandante en jefe after falling ill several years ago, Fidel still has many people). We were soon deposited at a “protocol house” in a government compound whose architecture reminded me of the gated communities of Boca Raton. The only other guest in this vast enclosure was the president of Guinea-Bissau.

I was aware that Castro had become preoccupied with the threat of a military confrontation in the Middle East between Iran and the U.S. (and Israel, the country he calls its Middle East “gendarme”). Since emerging from his medically induced, four-year purdah early this summer (various gastrointestinal maladies had combined to nearly kill him), the 84-year-old Castro has spoken mainly about the catastrophic threat of what he sees as an inevitable war.

I was curious to know why he saw conflict as unavoidable, and I wondered, of course, if personal experience – the Cuban missile crisis of 1962 that nearly caused the annihilation of most of humanity – informed his belief that a conflict between America and Iran would escalate into nuclear war. I was even more curious, however, to get a glimpse of the great man. Few people had seen him since he fell ill in 2006, and the state of his health has been a subject of much speculation. There were questions, too, about the role he plays now in governing Cuba; he formally handed off power to his younger brother, Raul, two years ago, but it was not clear how many strings Fidel still pulled.

The morning after our arrival in Havana, Julia and I were driven to a nearby convention center, and escorted upstairs, to a large and spare office. A frail and aged Fidel stood to greet us. He was wearing a red shirt, sweatpants, and black New Balance sneakers. The room was crowded with officials and family: His wife, Dalia, and son Antonio, as well as an Interior Ministry general, a translator, a doctor and several bodyguards, all of whom appeared to have been recruited from the Cuban national wrestling team. Two of these bodyguards held Castro at the elbow.

We shook hands, and he greeted Julia warmly; they have known each other for more than twenty years. Fidel lowered himself gently into his seat, and we began a conversation that would continue, in fits and starts, for three days. His body may be frail, but his mind is acute, his energy level is high, and not only that: the late-stage Fidel Castro turns out to possess something of a self-deprecating sense of humor. When I asked him, over lunch, to answer what I’ve come to think of as the Christopher Hitchens question – has your illness caused you to change your mind about the existence of God? – he answered, “Sorry, I’m still a dialectical materialist.” (This is funnier if you are, like me, an ex-self-defined socialist.) At another point, he showed us a series of recent photographs taken of him, one of which portrayed him with a fierce expression. “This was how my face looked when I was angry with Khruschev,” he said.

Castro opened our initial meeting by telling me that he read the recent Atlantic article carefully, and that it confirmed his view that Israel and America were moving precipitously and gratuitously toward confrontation with Iran. This interpretation was not surprising, of course: Castro is the grandfather of global anti-Americanism, and he has been a severe critic of Israel. His message to Benjamin Netanyahu, the Israeli prime minister, he said, was simple: Israel will only have security if it gives up its nuclear arsenal, and the rest of the world’s nuclear powers will only have security if they, too, give up their weapons. Global and simultaneous nuclear disarmament is, of course, a worthy goal, but it is not, in the short term, realistic.

Castro’s message to Mahmoud Ahmadinejad, the President of Iran, was not so abstract, however. Over the course of this first, five-hour discussion, Castro repeatedly returned to his excoriation of anti-Semitism. He criticized Ahmadinejad for denying the Holocaust and explained why the Iranian government would better serve the cause of peace by acknowledging the “unique” history of anti-Semitism and trying to understand why Israelis fear for their existence.

He began this discussion by describing his own, first encounters with anti-Semitism, as a small boy. “I remember when I was a boy – a long time ago – when I was five or six years old and I lived in the countryside,” he said, “and I remember Good Friday. What was the atmosphere a child breathed? `Be quiet, God is dead.’ God died every year between Thursday and Saturday of Holy Week, and it made a profound impression on everyone. What happened? They would say, `The Jews killed God.’ They blamed the Jews for killing God! Do you realize this?”

He went on, “Well, I didn’t know what a Jew was. I knew of a bird that was a called a ‘Jew,’ and so for me the Jews were those birds. These birds had big noses. I don’t even know why they were called that. That’s what I remember. This is how ignorant the entire population was.”

He said the Iranian government should understand the consequences of theological anti-Semitism. “This went on for maybe two thousand years,” he said. “I don’t think anyone has been slandered more than the Jews. I would say much more than the Muslims. They have been slandered much more than the Muslims because they are blamed and slandered for everything. No one blames the Muslims for anything.” The Iranian government should understand that the Jews “were expelled from their land, persecuted and mistreated all over the world, as the ones who killed God. In my judgment here’s what happened to them: Reverse selection. What’s reverse selection? Over 2,000 years they were subjected to terrible persecution and then to the pogroms. One might have assumed that they would have disappeared; I think their culture and religion kept them together as a nation.” He continued: “The Jews have lived an existence that is much harder than ours. There is nothing that compares to the Holocaust.” I asked him if he would tell Ahmadinejad what he was telling me. “I am saying this so you can communicate it,” he answered.

Castro went on to analyze the conflict between Israel and Iran. He said he understood Iranian fears of Israeli-American aggression and he added that, in his view, American sanctions and Israeli threats will not dissuade the Iranian leadership from pursuing nuclear weapons. “This problem is not going to get resolved, because the Iranians are not going to back down in the face of threats. That’s my opinion,” he said. He then noted that, unlike Cuba, Iran is a “profoundly religious country,” and he said that religious leaders are less apt to compromise. He noted that even secular Cuba has resisted various American demands over the past 50 years.

We returned repeatedly in this first conversation to Castro’s fear that a confrontation between the West and Iran could escalate into a nuclear conflict. “The Iranian capacity to inflict damage is not appreciated,” he said. “Men think they can control themselves but Obama could overreact and a gradual escalation could become a nuclear war.” I asked him if this fear was informed by his own experiences during the 1962 missile crisis, when the Soviet Union and the U.S. nearly went to war other over the presence of nuclear-tipped missiles in Cuba (missiles installed at the invitation, of course, of Fidel Castro). I mentioned to Castro the letter he wrote to Khruschev, the Soviet premier, at the height of the crisis, in which he recommended that the Soviets consider launching a nuclear strike against the U.S. if the Americans attack Cuba. “That would be the time to think about liquidating such a danger forever through a legal right of self-defense,” Castro wrote at the time.

I asked him, “At a certain point it seemed logical for you to recommend that the Soviets bomb the U.S. Does what you recommended still seem logical now?” He answered: “After I’ve seen what I’ve seen, and knowing what I know now, it wasn’t worth it all.”

After this first meeting, I asked Julia to explain the meaning of Castro’s invitation to me, and of his message to Ahmadinejad. “Fidel is at an early stage of reinventing himself as a senior statesman, not as head of state, on the domestic stage, but primarily on the international stage, which has always been a priority for him,” she said. “Matters of war, peace and international security are a central focus: Nuclear proliferation climate change, these are the major issues for him, and he’s really just getting started, using any potential media platform to communicate his views. He has time on his hands now that he didn’t expect to have. And he’s revisiting history, and revisiting his own history.”

Jeffrey Goldberg is a national correspondent for The Atlantic. Author of the book Prisoners: A Story of Friendship and Terror, he has reported from the Middle East and Africa. He also writes the magazine’s advice column.