The billionaire Koch brothers who are funding the Tea Party wackos, throw in their chips in an attempt to destroy the state’s greenhouse gas emissions laws. 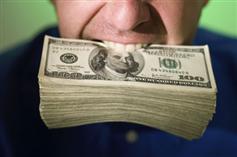 Cutthroat oil barons Valero Energy Corporation and Tesoro Corporation are injecting millions of dollars into efforts to postpone California’s Global Warming Solutions Act of 2006 (AB 32), which requires that the state’s greenhouse gas emissions be reduced to 1990 levels by 2020, at the ballot this November.

That’s bad enough on its face, but worse when one considers that both companies are based in Texas. But now they can count the controversial Kansas conglomerate Koch Industries — which has been quietly bankrolling the Tea Party wacktivists who have been crawling out of the past to forestall the future by any means necessary — as conspirators in that long-distance crime. Koch just dropped a cool million on Valero and Tesoro’s Proposition 23 efforts to wind back the clock on California’s green revolution. You’re welcome.

Using warm, fuzzy nomenclature like the “California Jobs Initiative,” Proposition 23PDF) hilariously argues that, “The people desire to temporarily suspend the operation and implementation of AB 32 until the state’s unemployment rate returns to the levels that existed at the time of its adoption” — 4.8 percent, to be exact — without providing any context as to why that is either necessary or important. Like Koch’s equally facts-challenged Tea Party, Prop 23 simply wants to stop California’s environmental progress in its tracks from the comfort of its Kansas and Texas boardrooms. doesn’t actually have the stones to demand a repeal of AB 32, which was signed into law by Governor Schwarzenegger, who stated a year earlier that, “The debate is over global warming, and the pollution and burning of fossil fuels that cause it are threats we see here in California and everywhere around the world.” Nor does it have any actual proposals for job growth: Its paltry statement of purpose.

The primary funders of Prop. 23 “are among the nation’s biggest polluters, and their California oil refineries are among the top ten polluters in our state,” argues the No On 23 committee’s fact-sheet. “The fine print in Prop. 23 reveals their plan is to kill [AB 32]’s standards by prohibiting them from being enforced unless unemployment drops to a fixed level that has rarely ever been achieved.”

However, the numbers that have been achieved in the name of Proposition 23 are alarming. Out of the over $8 million in contributions the proposers have rustled up so far, 97 percent comes from oil interests, 89 percent has seeped in from outside of California, and 80 percent has come from Valero, Tesoro and Koch. Those instructive statistics alone prove it is not “the people” who want AB 32 killed in mid-stride, it’s the corporations, and very few others.

It doesn’t take more than a cursory glance at the coalitions involved to support that proof. The No On 23 crowd claims a sprawling list of supporters featuring instantly recognizable names in health care, labor, consumer rights, green tech, social justice, faith-based organizations and scores of local governments and businesses. Proposition 23 defenders are mostly made up of taxpayer rightists, local chambers of commerce and similarly minded tightwads. That includes Americans For Prosperity, a libertarian advocacy octopus founded in 1994 by billionaire David Koch of Koch Industries, whose No Climate Tax Pledge has been signed by loony political operatives like Michelle Bachmann and whose organizer for its recent Fourth of July summit called Texas Defending the American Dream, Ann Venable, enthusiastically claimed, “I was part of the Tea Party before it was cool!”

But it’s beyond uncool to think that Proposition 23 is going to do anything other than free Valero and Tesoro’s California operations — which include hundreds of local refineries and gas stations  — from the constraints of increased emissions regulation. Postponing AB 32 will also give Koch Industries — a serial polluter in several states as well as a “stealth entity” whose astounding revenues place it outside the reach of more popularly maligned monopolies like AT&T and Microsoft — a greater hand in manipulating economies. Which is a scary prospect indeed, when you consider that the California Air Resources Board claimed this year that the Global Warming Solutions Act will create 10,000 new jobs in the next decade.

For its part, Proposition 23 defenders dog-piling atop what it calls “California’s job-killing global warming law” claim that millions of employees would lose their jobs if Proposition 23 does not pass, a future-dependent scenario that fails to take into account inevitable shifts in the state’s economy, international trends in fossil fuels, even global warming itself. According to a recently leaked German report, which has echoed similar reports from Britain, America and elsewhere, peak oil is either already here or on schedule for the next decade.

And after all, how much can you trust a company like Koch, which has been faithfully funding climate change deniers for years, to operate, however remotely, in the public’s interest? This is a company that has paid millions of dollars in fines for illegally dumping hazardous waste from the Mississippi River to Texan lakes and beyond. Its subsidiary Flint Hill Resources, which supplied Proposition 23 with its cool million, was forced to pay a $200,000 civil penalty for illegally exporting oil to Canada without government authorization, and thousands more for 10 separate violations of the Clean Air Act. Talk about lunatics running the asylum.

Proposition 23 is nothing more than a power move by fossil fools to prevent California from leading the nation into an environmental awakening decades in the making. To argue it has anything to do with jobs, common sense or reality itself is stretching credulity past the breaking point, and seriously endangering the state’s citizens and economy. Those who vote for it are simply entrenching the status quo, and putting Californians at risk. Those who vote against it are embracing a future where fossil fuels, like the dinosaurs from which they came, are relics from a past that is simply too lethal to sustain.