WikiLeaks: The National-Security State Strikes Back 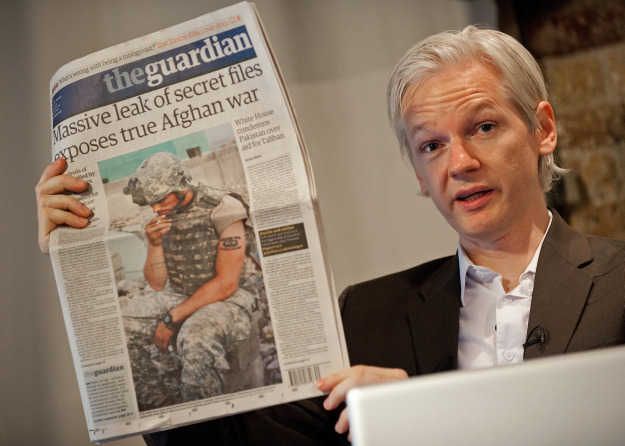 WikiLeaks’ disclosure of the 91,000 U.S. government documents that it labels the “Afghan War Diary” raises a number of vital issues. Most of the discussion so far has focused on the significance of the documents themselves. They make the intelligence community look not so intelligent, and they make a number of political leaders look like dissemblers, spewing claims about the situation in Afghanistan that can’t really be squared with information in their briefing portfolios. But quite apart from their contents, the WikiLeaks documents are a test for America’s voracious national-security state. Its response to them gives us a sense of how it intends to fight perceived threats to secrecy.

An Information War Targeting WikiLeaks. Field officers of the intelligence community urgently need to play a game of misdirection–relabeling the threat that is presented to them. They will argue that the WikiLeaks disclosures imperil the safety of American forces on the ground, America’s allies, and thus every American citizen sitting at home. They will find few facts to back this contention, but that won’t stop them. This argument has already been rolled out repeatedly. Almost immediately on publication, it was in a statement issued by Obama’s National Security Advisor, General James Jones. The latest variant is the claim, advanced last week at the Pentagon, that the leaks have disclosed the names of Afghans who collaborate with the U.S. military. That’s certainly a plausible argument—and it’s regrettable that WikiLeaks decided to publish the documents without blocking these names—but so far the concern is hypothetical rather than real. In any event, however, the first stage in the effort to build public support will be to demonize WikiLeaks. It will be accused of endangering men and women in uniform, even though it might be better described as a channel in which they can vent their frustration at institutionalized stupidity and wrongdoing. Much of the American media, which filled the airwaves with bogus claims about WMDs in Iraq, can be counted on to view WikiLeaks as an adversary rather than an ally.

Making an Example of the Leaker. Focal to the response will be a harsh and heavy-handed prosecution or court-martial of the leaker. The message to other would-be whistleblowers must be clear. Cross us, and we will destroy you. You have no law or rights to hide behind. We can and will turn you into the enemy. At this point, attention is focused on Private Bradley Manning, a young enlisted man from Potomac, Maryland, who was arrested and detained in Kuwait. He appears to have been denied access to independent counsel and held incommunicado outside the country. Reports also indicate that criminal investigators are looking to identify individuals who may have facilitated his leak. A student at MIT was identified this past weekend as having assisted Manning in some Internet maneuvers. While the facts remain to be fully developed, it seems hard to see how Manning can mount a meaningful legal defense. The military whistleblower statute carves out a very narrow zone in which uniformed service personnel can disclose classified information; Manning does not appear to be in a position to avail himself of these defenses. Considering the weakness of Manning’s position, the heavy-handed tactics which are being applied against him are mystifying displays of asymmetrical legal warfare.

Destroying WikiLeaks. But the major target surely is WikiLeaks itself, and on this score the goal of the national-security state is unambiguous. WikiLeaks must be destroyed. Indeed, as I noted in March, long before these leaks, the Army Counterintelligence Center had prepared a 32-page secret plan to destroy WikiLeaks. The memo notes that the American intelligence community has valuable allies in the struggle against WikiLeaks—China, North Korea, Russia, Vietnam, and Zimbabwe. It recommended emulating the tactics used by these tyrannical states:

The identification, exposure, termination of employment, criminal prosecution, legal action against current or former insiders, leakers, or whistleblowers could potentially damage or destroy this center of gravity and deter others considering similar actions from using the Wikileaks.org Web site.

Finally, it argues that WikiLeaks itself must be criminalized and put out of business.

There is some evidence that this strategy is in fact being implemented. The Huffington Post reports:

Jacob Appelbaum, a Seattle-based volunteer hacker for Wikileaks, touched down at Newark Internation Airport in New Jersey on his way back from Holland last Thursday, and was promptly whisked away by U.S. customs officials for a “random” security search. The hacker told CNET he was interrogated as to the whereabouts of his boss — Wikileaks founder Julian Assange, who has gone underground since the U.S. government announced it was hunting him — as well as “his attitudes to the wars in Afghanistan and Iraq and on the philosophy behind Wikileaks.” Appelbaum’s laptop was briefly confiscated, but investigators kept his three cell phones.

And indeed, Julian Assange may himself be a even more serious target. How might the United States deal with Assange? Marc Thiessen, a Republican publicist and torture apologist with close ties to former CIA Director Hayden, argues that Assange is a non-American who lives outside the country and therefore apparently has no legal rights. He advocates kidnapping and hints at still more violent conduct. As Eva Rodriguez notes, Thiessen seems ready to send drones over Iceland–one of a number of European states, nearly all of which are U.S. allies, that has supported WikiLeaks. When Daniel Ellsberg suggested earlier that Assange might be in physical danger, the comment was roundly dismissed by the “responsible media.” But Thiessen—who often appears to be the mouthpiece of senior Bush-era intelligence community figures–demonstrates just how well taken were Ellsberg’s concerns. I don’t think the Obama Administration will use a drone to murder Assange, but some in the intelligence community will be arguing for use of some of the “black arts” that were a staple of covert operations in the Bush era. He will certainly be targeted for petty harassment and subject to steady surveillance, and efforts to kidnap him are almost certainly being spun at this very moment. On this score, the intelligence community should recall what came of its kidnapping caper in Italy in 2002. (Tonight at 9 p.m. EDT, HDNET will premiere “The Italian Job,” a report on that particular intelligence fiasco.)

Few functions are so fundamental to a democracy as the decision about when and how to wage a war. That decision means an investment of treasure and blood that can affect the lives of hundreds of millions in America and elsewhere. In this process, fair presentation and discussion of the facts is essential to a correct result. If information can be routinely suppressed because it is embarrassing to political leaders or would undermine the arguments they make to the nation, then our democracy is faltering. In the wake of these disclosures, Americans should carefully judge the conduct of those who claim that suppressing the leaks is in the interests of national security. Are they upholding national security, or are they betraying American democracy?