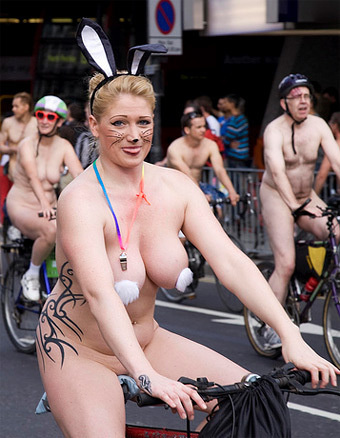 World Naked Bike Ride took place this past weekend to protest overdependence on cars. A good message, but why is bike solidarity always naked? If biking without a helmet is dangerous, shouldn’t nude biking be, too?

I support biking and I support nudity. But as a joint phenomenon, nude biking has always eluded me. Naked bikers have appeared at Williamsburg’s Hasid-Hipster bike lane war. Naked bikers have demonstrated for marijuana legalization, body acceptance, and Summer Solstice, and in support of gardens. Why do naked protesters want to be on bicycles? Why do cyclists want to be nude?

Whenever naked bike rides come up, all I can think about is greasy chains and skinned knees (and other body parts), and the discomfort of a bike seat up your butt. So, as far as I can tell, nudity doesn’t enhance cycling too much.

Maybe bicycles are good for nudity? The most awkward part of streaking is naked person-clothed person interaction, and the riskiest part of streaking (besides the presence of a video camera) is the fear that someone creepy will reach out and touch you. Being on a bicycle minimizes this awkwardness and that risk by putting all naked people at a different speed from onlookers and wandering spectators.

Or is the appeal of naked biking the awkwardness itself? Of the naked body, organic and blobby, interacting with a bicycle, one of the most efficient mechanical objects around? Maybe we should start having naked crank-a-can-opener days, or naked build-a-clock-from-scratch afternoons. Jerry Seinfeld would be horrified, which is always a bonus, I suppose.