I am a snake, says Van der Sloot 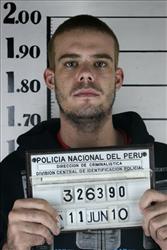 Accused murderer ‘afraid I will be killed’

Joran Van der Sloot is being so forthcoming about Natalee Holloway’s fate because he fears what will happen to him behind bars. “I don’t want to be imprisoned in Peru,” People quotes a Peruvian paper as reporting. “I am afraid I will be killed.” Hence the bid to tell all to Aruban authorities—in Aruba. Says a lawyer in Peru: “This way he’ll be safe not only from rape but also from being killed.”

“I don’t think that so many people will be able to sympathize with somebody who killed little girls,” a former official of of Peru’s notoriously brutal prison system chimes in. “Criminals have codes, you know. . . . I guess many people in jail will not like that.”

I Know Where Natalee’s Body Is: Van der Sloot
But confessed killer won’t spill to anyone but Aruba cops

We’ve heard this song before, but Joran Van der Sloot is singing it again: The confessed murderer claims he knows where Natalee Holloway’s body is buried—but says he won’t give details to anyone but the cops in Aruba, reports the New York Daily News. Police sources told NBC News that he admitted to knowing the location last night.

This comes on the heels of Van der Sloot’s alleged extortion of Holloway’s mother, who paid him $25,000 to learn where Natalee is; he told an undercover agent she was buried in a house in Aruba, but records show it hadn’t yet been built at the time of her disappearance.

“I’ve received threats, many threatening e-mails. … This isn’t for me,” Maximo Altez told The Associated Press.

He would not describe the threats in a brief telephone conversation, saying only that he would stop representing the young Dutchman when members of Van der Sloot’s family arrive in Peru in the next few days.

Police say Van der Sloot confessed last week to killing a 21-year-old Lima student, Stephany Flores, on May 30 in his hotel room after the two met playing poker at a casino.

Van der Sloot, 22, also remains the lone suspect in the disappearance exactly five years earlier in Aruba of U.S. teen Natalee Holloway. He was twice arrested and freed in that case for lack of evidence.

It was not known who will replace Altez. Dutch officials said before Van der Sloot was charged last week that his mother, a schoolteacher in Aruba, might have to borrow money in order to afford defense counsel. She has refused to talk to reporters.

A different judge, Carlos Morales, will preside over the case, said court spokesman Luis Gallardo. It is not known when the trial will begin.

Prosecutors say Van der Sloot acted with “ferocity and great cruelty” in allegedly killing Flores. According to a transcript of the confession police say he made, Van der Sloot elbowed the young woman in the nose, strangled her with both hands, threw her to the floor, took off his bloodied shirt and asphyxiated her.

Van der Sloot is being held in a segregated block of the maximum-security Castro Castro prison in eastern Lima. He asked to be separated from the main prison population out of fear for his life.

The Dutchman has his own 2-by-3.5-meter (6.6-by-11.5-foot) cell, which is adjacent to that of a reputed Colombian hit man, a spokesman for the National Penal Institute told the AP, speaking on condition of anonymity for security reasons.

Both share the television set in the Colombian inmate’s cell, the spokesman said.