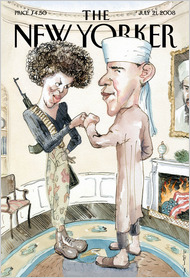 In “The Bridge,” Mr. Remnick seemed particularly interested in Mr. Obama as “shape-shifter,” how “Obama could change styles without relinquishing his genuineness.” The journalist in Mr. Remnick might recognize something of the same quality in himself.

“The Bridge,” The 672-page biography examines Mr. Obama’s life and racial identity, with strands on Kenyan politics, legal scholarship, his mother’s doctoral dissertation on Indonesian blacksmithing, even a transcript of a recording of the teenage Mr. Obama joking with his buddies.

Mr. Remnick stands out at the 4 Times Square headquarters in other ways. He takes the subway to work, not a town car, and lacks the imperiousness or mercurialness that surround other celebrity editors, including his predecessor, Tina Brown. (Ms. Brown’s shadow is so long that Mr. Remnick is still regarded as a newcomer, even though he has now edited the magazine for 12 years, twice as long as she did.) He tends to avoid the city’s hot restaurants, preferring Ouest, an average American bistro around the corner from his apartment.

Tina Brown Talks with David Remnick: The Full Interview from The Daily Beast Video on Vimeo.