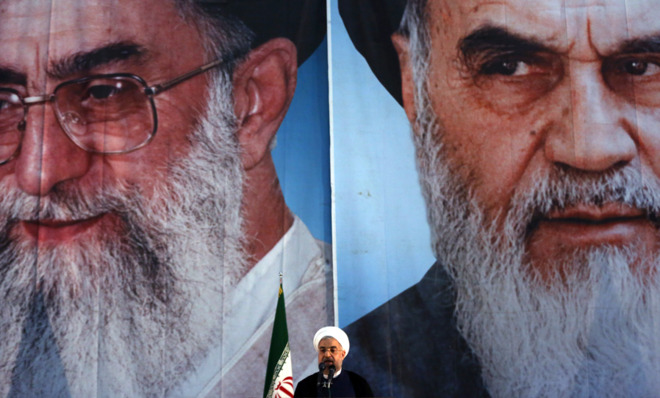 Given the troubling and violent rise this summer of ISIS in Syria and Iraq, the continuing civil war in Syria, and the brutal persecution of Christians in the region, you could almost forget that Iran’s pursuit of nuclear weapons is still one of the most dangerous threats to the West.

And here is a sad truth: An Israeli war with Iran has become almost inevitable, and the Obama administration has played a big role in us getting to that point.

Don’t believe me? Consider things from Iran’s point of view. The Obama administration has basically taught rogue nations that if you have WMDs, you should never give them up, and that the pursuit of WMDs will be a profitable one, because pursuing or stockpiling WMDs gives you enormous deterring power in keeping the West from military intervention in your country.

It’s easy to forget, but a few years ago, the international community, very much including then–President George W. Bush and the United States, made a deal with Libya’s Moammar Gadhafi whereby he would give up his weapons of mass destruction and stop sponsoring terrorism. In exchange, the West would allow investment in Libya — and not push to change Gadhafi’s regime. The international community and President Obama then essentially reneged on this deal just a few years later, in 2011, ( a doublecross) by engaging in a bombing campaign meant to give cover to the Libyan rebels. Since Libya did not have WMDs (unlike, say, North Korea), there was nothing to stop the international community from intervening. Some will say that the West had no choice but to stop Gadhafi from committing atrocities. Perhaps that’s so. But if the West wanted to retain the option of military intervention in Libya, they shouldn’t have made the deal in the first place. From Gadhafi’s point of view, wouldn’t it have been better to keep the WMDs as a way to prevent Western intervention? Isn’t that the lesson other rogue nations would learn from this series of events?

You could find similar wisdom in Ukraine. Even though there’s not much the West can or should do about Ukraine, the lesson of the Ukraine drama is that Ukraine should not have given up its nukes. It’s difficult to imagine Putin’s military meddling in Ukraine — or the West allowing it — if Ukraine had WMDs. By giving up this deterrent, Ukraine lost much of its ability to self-determine its own future.

Any proposed nuclear deal with Iran would include “security guarantees” on the part of the West in exchange for Iran giving up its nuclear program. But these security guarantees, even if they were once credible, no longer can be. From Iran’s point of view, the United States cannot be trusted. The Iranian regime knows that it may, at some point in the future, have to commit atrocities against its population to protect its power, just as Gadhafi did in Libya. And Iran knows that, if it has to do so, it needs to have WMDs to deter an intervention by the international community.

Given the Iranian mullahs’ incentive matrix, there is no course for them other than developing a nuke as fast as possible. Within this context, the “deal” with the Obama administration looks like a bid to buy time as they keep rushing toward nuclear weapons as fast as possible.

Of course, this is hardly all Obama’s fault. Much of this history predates America’s current president. But thanks to American intervention in Libya, the Obama administration has made the learning of this lesson unavoidable.

Now, what does all of this mean for Israel? Well, if your next-door neighbor left messages on your answering machine every morning saying that one night he will slaughter your children, and if you could see him through his windows sharpening knives and buying guns, and if the police were not willing to do anything about it, how long would you wait until taking action?

The big question mark has always been whether this is cynical propaganda from Iran, or if this is really what Iran’s leaders believe; essentially whether Iran’s leaders are rational, or fanatical. If they are rational, the reasoning goes, then they can be deterred from destroying Israel.

This is not quite the right question. It’s not a simple question of whether Iran’s leadership is rational, but what chance that Iran’s leadership is not rational Israel should accept. Just as Iran hawks need to weigh carefully the consequences of their proposed course of action, Iran doves need to look carefully in the mirror and ask themselves: What percentage chance of a new Holocaust am I willing to allow? Five percent? Ten percent? Twenty percent? Fifty percent?

As hackneyed as Hitler comparisons often are, sometimes they are necessary, and in this case inevitable. Hitler’s was a regime that proclaimed with great regularity and forthrightness that it intended to murder all the Jews it could. And the international community ignored this, essentially, because they couldn’t believe that anyone could be so irrational or fanatical. Well, sometimes, people really are that irrational and fanatical. We don’t know if Iran’s leaders fit that description, but the Iran doves — think European diplomats and Western columnists — who categorically assume Iran’s leaders cannot possibly be this crazy are forgetting history.

But given everything we know about human history, and given everything we know about Iran, it would be simply unconscionable for any Israeli leader to not at least partially believe Iran’s leadership when they call for Iran’s destruction. It is very far from a certainty that a nuclear-armed Iran would incinerate Tel Aviv. But it is simply unthinkable for any sane Israeli leadership to simply presume it is a certainty that Iran wouldn’t.

Some say that Israel won’t strike Iran because it can’t. Well, since 1948, everyone who has bet that the Israeli military couldn’t do something has lost. We know the United States has sold to Israel its most powerful bunker-busting bombs, and there’s no reason to think Israel’s extremely high-tech weapons industry hasn’t developed even more powerful ones. We know it would be very hard for Israel to reach Iran without flying through Saudi Arabia. Would they? You bet they would. (And the Saudis would be glad to let them, although they would act outraged afterward.)

The Israeli military operates according to one master principle: en brera — no alternative. It has repeatedly performed the impossible because it has had no other choice.

And Israel has continuously ensured its survival by defeating its enemies militarily — again, because it hasn’t had the alternative.