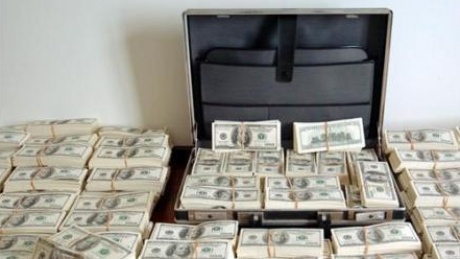 The trouble with moving big amounts of cash, from a criminal’s point of view, is threefold. It’s bulky, it’s heavy and it smells.

A stash of $1 million in mixed bills weighs around 100 pounds (50 kilos). Specially-trained dogs can sniff out bulk cash in a heartbeat.

All of which helps to explain why drug cartels and financiers of terrorism appear to have been making increasing use of what FBI chief Robert Mueller calls a shadow banking system.

Its features include a legal loophole that allows money launderers to get around the requirement that cash or “monetary instruments” (share certificates, travellers’ cheques, money orders etc.) in excess of $10,000 must be declared on entering or leaving the United States.

It is, however, perfectly legal to carry, say, $50,000 embedded in the magnetic stripes of so-called pre-paid stored-value cards.

They look like a credit or debit card but are not linked to a bank account, can in many cases be loaded anonymously, are not “monetary instruments” under U.S. law, and were labelled “the ideal instrument for large-scale drug trafficking and money-laundering operations” in a 2006 analysis by the National Drug Intelligence Center.

It predicted that drug traffickers, narco-terrorists and other criminals would increasingly rely on stored-value cards — “superior to established methods of money laundering” — because they could be used without fear of documentation, identification, law enforcement suspicion or seizure.

In other words, a shot in the arm of the global money laundering industry, an illicit enterprise that accounts for between 2 and 5 percent of the world’s GDP, according to an estimate by the International Monetary Fund.
The Center’s dark warnings did little to curb the rapid growth of the stored-value card industry — more than $300 billion a year by some estimates.

At a congressional hearing in mid-March, the FBI’s Mueller reported that “recent money laundering investigations have revealed a trend on the part of criminals to use stored-value devices such as pre-paid gift cards and reloadable debit cards in order to move criminal proceeds.

“This has created a shadow banking system…”

The largely unregulated stored-value card industry, he said, made it difficult for law enforcement to spot transaction patterns that can help identify money launderers and financiers of terrorism.

A QUESTION TO TIM GEITHNER

So if the cards are such a threat, why is there no regulation? It is a question two senators, Joseph Lieberman and Susan Collins, asked in a February 16 letter to U.S. Treasury Secretary Timothy Geithner.

The two, respectively the chairman and the ranking member of the Senate’s Committee on Homeland Security and Governmental Affairs, last year authored an amendment to close the stored-value card loophole.

The amendment became part of an act on credit card accountability and disclosure President Barack Obama signed into law on May 22 last year. The amendment stipulated that the Treasury Department work out regulations on the sale, issuance, redemption and international transportation of stored value cards within 270 days.

The deadline lapsed on February 16 and the letter asks for an explanation for the delay in issuing rules. So far, there has been no reply.

It’s not clear whether the delay is due to bureaucratic inertia, overwork in a Treasury Department busy with a deep financial crisis, or, as money laundering expert Charles Intriago put it, “a manifestation of the unhealthy power of big money, financial institutions and their lobbyists.”

Intriago, an anti-money laundering crusader for decades, runs the International Association for Asset Recovery, a company based in Miami.

How much dirty money flows through the stored-value card loophole is anyone’s guess.

“It’s not possible to quantify how much money is moving one way or the other,” Paul Campo, the chief of the Drug Enforcement Administration’s office of financial investigations said in an interview. “But the case of Virtual Money Inc. gives an idea of the potential scale of the problem.”

According to a government indictment that stemmed from a DEA sting operation, drug dealers using pre-paid cards issued by Virtual Money, a company based in Texas, withdrew $7.1 million from automatic teller machines (ATMs) in the Colombian city of Medellin in 2006.

Despite the concern over more sophisticated methods of moving ill-gotten gains, carting cash across borders has not gone out of fashion. In 2009, government agents along the border with Mexico seized $39.2 million in currency, according to official figures. That compares with around $10 million in 2008 and is due to more frequent checks of southbound traffic for cash and guns.

Nearly $40 million in confiscated cash sounds a lot. But it is less than pocket change, in the grand scheme of things. The U.S. Justice Department estimates that drug cartels smuggle $24 billion a year into Mexico, $40 million amounts to 0.16 percent of the estimated total. What about the rest? Nobody can give a breakdown, but tighter regulations surely can’t hurt.