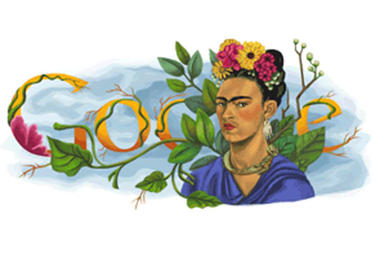 Frida Kahlo, surrealist painter and one of Mexico’s best-known celebrities, would have turned 103 today.

What better way to celebrate Kahlo’s life than on the Web, where her work and biography are only a few clicks away?

Our monstor search engine kicked off her online birthday party with one of its specialty logos. As with most of the painter’s work, this Google Doodle depicts Kahlo amid a fantastical setting. Lush vines snake through the scene, twisting around the company banner.

Kahlo specialized in such mixtures of self-portraits and surrealist symbolism. She “intuitively anticipated the age of the celebrity artist by consciously turning herself into a work of art and her public appearances into near performances,” according to a Monitor retrospective from 2008. “Behind Kahlo’s carefully cultivated, sometimes outrageous, public facade was a person for whom art was a lifeline, a way of actuating emotional and physical self-preservation during a sometimes bleak existence with frequent health challenges resulting from an accident in her youth.”

If you’re unfamiliar with her work, check out the video below, which runs through many of her most famous paintings – with a digital flourish.


Frida’s life began and ended in Mexico City, in her home known as the Blue House. She gave her birthdate as July 7, 1910, but her birth certificate shows July 6, 1907. Frida claimed this so because she wanted the year of her birth to cooincide with the year of the outbreak of the Mexican revolution, because her life would begin with the birth of modern Mexico.
At age 6, Frida was stricken with polio, which caused her right leg to appear much thinner than the other. It was to remain that way permanently.