Steve Bannon is swatted AGAIN: Cops, firefighters and medics are called to ex-Trump strategist’s $2.4M DC home two months after hoax caller claimed a gunman was on the loose in his house

By PAUL FARRELL FOR DAILYMAIL.COM

Police in the nation’s capital confirmed to DailyMail.com that cops were called to the home in the 200 block of A Street NE at 7:17 pm local time.

According to the cops, after further investigation it was confirmed that no shots were fired and that there was no active threat. There were no injuries as a result of the swatting.

In addition to the police, fire and ambulances were also dispatched to the residence.

DailyMail.com has reached out to Bannon for comment on the incident.

This week Bannon, 68, floated a bizarre idea to have Trump ‘reinstated’ as president during an interview with Rudy Giuliani on the former’s War Room podcast.

On Saturday, speaking at an event in Missouri alongside Mike Lindell, Bannon endorsed controversial congresswoman Marjorie Taylor Greene as the next speaker of the house.

His comments came on the back of Trump’s claims that he should be reinstated and another election called in the wake of developments that Facebook suppressed the infamous New York Post Hunter Biden laptop story. 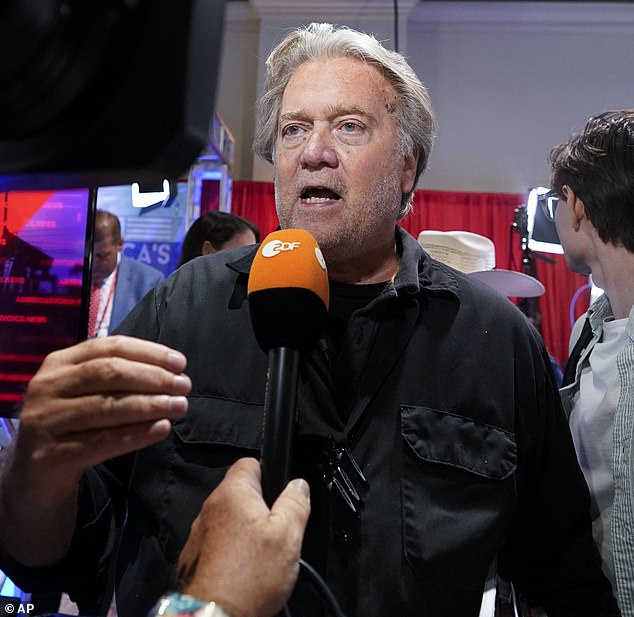 This week Bannon, 68, floated a bizarre idea to have Trump ‘reinstated’ as president during an interview with Rudy Giuliani on the former’s War Room podcast. 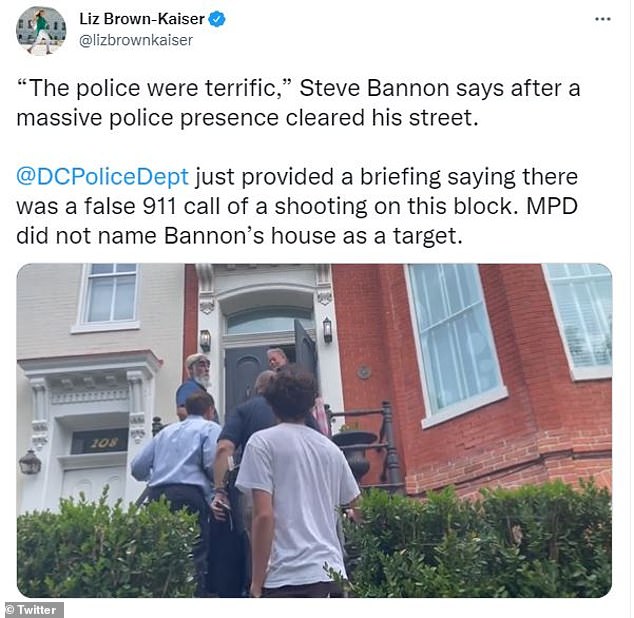 Steve Bannon can be seen entering his home in July following a hoax call that suggested there was a gunman on the loose who had shot someone inside the home. ‘The police were terrific’, he said 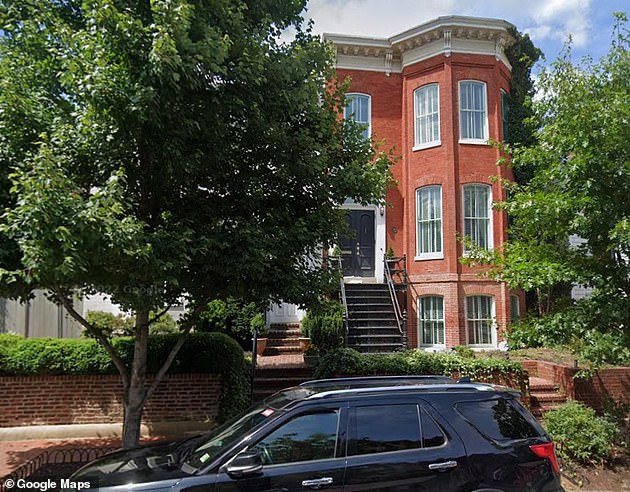 In July,  the former White House Chief strategist was reportedly live on air when cops swooped on the property, but it is not believed he was home.

He was later seen walking up the steps to the $2.35million rowhouse with police and told reporters they had ‘been terrific’.

Officers had been hunting a man with a ‘high powered rifle’ who was threatening to ‘shoot everyone’ when they approached the building.

It was reported to have come from a tip off in an alleged ‘swatting’ attempt – when a person makes a hoax call to the cops. 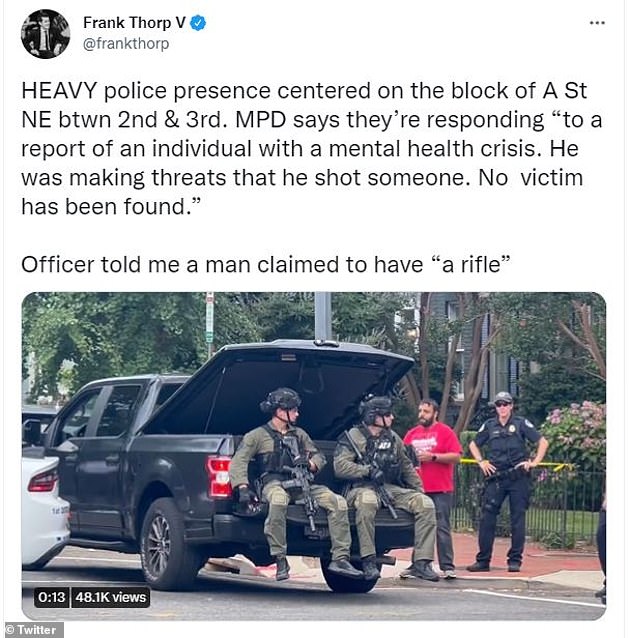 The road, which is near the Supreme Court building and the Capitol, was shut down for around an hour.

Bannon was later seen walking up the stairs to his three-story home -which he has lived in for the last five years – and said the ‘police were terrific’.

A police spokesman said: ‘About 12:30 pm, police reopened the streets after determining that there was no shooting, no weapon, no threat and no victim.’

It came as a lawyer for Bannon seeks to withdraw from representing the adviser to former President Donald Trump in his criminal contempt case, citing the possibility of being called as a witness at trial, a court document on Friday showed.

Bannon was charged last year with two counts of contempt of Congress for defying a subpoena issued by a House of Representatives committee investigating the Jan. 6, 2021, attack on the U.S. Capitol by Trump supporters.

Bannon has refused to provide testimony or documents, citing Trump’s claim – rejected by other courts – that the material is protected under a legal doctrine called executive privilege. 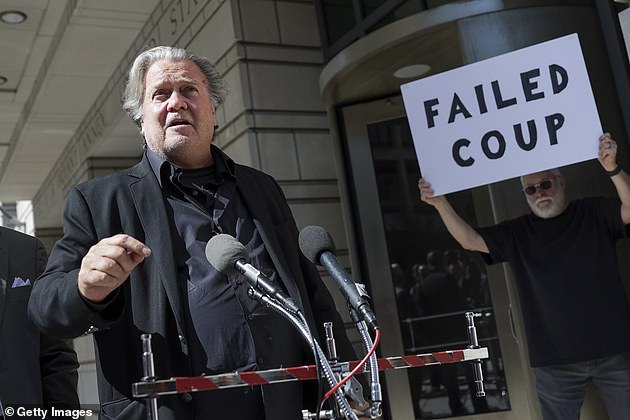 Bannon, who was former chief strategist for President Donald Trump is currently under indictment for ignoring a subpoena from the congressional committee investigating the January 6 attack on the Capitol. He is pictured here last month

Bannon, who has pleaded not guilty, has so far failed to get his July 18 trial dismissed or delayed. U.S. District Judge Carl Nichols has scheduled a hearing in the case on Monday.

The judge in April blocked Bannon’s attempt to tell jurors that he relied on advice from lawyers when he defied the congressional subpoena, an argument known as the ‘advice of counsel’ defense.

His lawyer Robert Costello, in the court filing on Friday, said he served as ‘Bannon´s sole basis of information about the facts and the law concerning this matter’ and that while he could serve as his attorney before the trial it appeared less clear that he could represent Bannon once proceedings began.

‘Since it appears there will be a trial, and since it appears that at this point in time I might be called as a witness, I must reluctantly ask the Court to grant my request’ asking to withdraw as trial counsel, Robert Costello wrote in a filing with the U.S. District Court for the District of Columbia.

Bannon, a prominent figure in right-wing media circles, was an architect of Trump’s 2016 presidential victory and served as White House chief strategist in 2017.

He was also charged in 2020 with conspiring to defraud donors as part of a private fundraising campaign promising to build Trump’s wall on the U.S.-Mexico border. His case was dropped after Trump pardoned him in his final hours in office in January 2021. 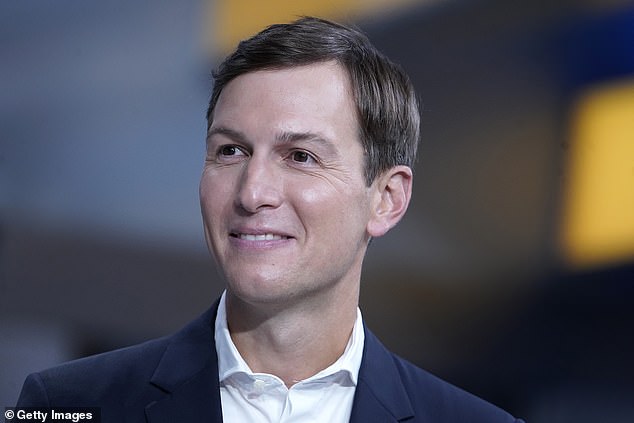 In his book, Breaking History: A White House Memoir, Trump’s son-in-law Jared Kushner wrote that he told the president he didn’t oppose a presidential pardon for Bannon, who had been charged with a fraud scheme related to an effort to raise private funds to build border wall.

‘Steve was incredibly destructive to your first year in office, but he was there for you on the first campaign when few were,’ Kushner told the president, he writes.

The excerpts, which were obtained by DailyMail.com, are contained in Kushner’s new book, Breaking History: A White House Memoir, which is out next month, and where he labels Bannon a ‘toxic’ presence in the White House.

Bannon became an outsized presence in the Trump White House, where he served as chief strategist with a wide portfolio and where he kept a white board filled with Trump campaign promises while battling people he viewed as ‘globalists’ and swamp creatures.

At one point, Gary Kohn, chair of the president’s Council of Economic Advisors, turned to Kushner for help because ‘Bannon is leaking on me nonstop. I’m not going to take this. I know how to fight dirty.’

Kushner took the matter to Bannon directly, although he acknowledged he should have stayed out of it.

‘Steve, you gotta stop leaking on Gary. We’re trying to build a team here,’ Kushner says he told him.

‘Cohn’s the one leaking on me,’ Bannon shot back, according to Kushner.

‘Jared, right now, you’re the one undermining the president’s agenda,’ Kushner writes, saying Bannon’s eyes were ‘intense and voice escalating into a yell.’