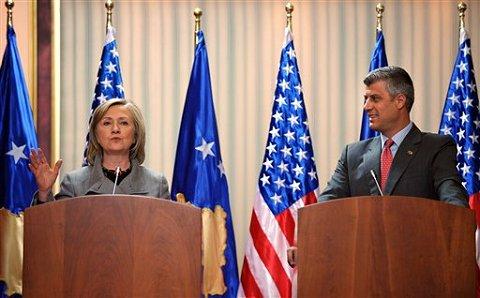 Secretary of State Hillary Clinton pledged to work for broader international recognition of Kosovo on Wednesday during a visit to Pristina, the first by a U.S. chief diplomat since Kosovo’s independence in 2008. Clinton also stressed U.S. backing for the rights of Kosovo’s Serb minority.

Secretary Clinton received a hero’s welcome from hundreds of Pristina residents as she stopped her motorcade at a nearly four-meter-high statue honoring her husband – former President Bill Clinton – along a boulevard named for him.

Clinton administration is revered in Kosovo for having backed the 1999 NATO air campaign that ended a brutal crackdown by Serb forces, and put the majority ethnic-Albanian region on the road to independence.

In talks with Kosovo Prime Minister Hashim Thaci and other officials, the Secretary of State pledged continuing U.S. political support for Kosovo, and its quest for broader international recognition and full European Union and NATO membership.

At a press event with Mr. Thaci, Clinton said she was heading for Brussels, the last stop on her four-day European trip, with a list of countries the United States will try to persuade to recognize the Pristina government.

About 70 nations, with some EU members notably absent, have recognized Kosovo’s 2008 declaration of independence from Serbia. Clinton said that number should increase following the International Court of Justice’s ruling upholding the legality of the independence move.

“We think it’s important to continue to increase the numbers of countries that recognize [Kosovo], especially after the ICJ opinion, which we believe settles the matter of independence once and for all,” she said. “I also believe that the approach that the government of Kosovo has been taking has really earned admiration and support from around the world.”

Clinton, who visited Belgrade prior to her stop in Kosovo, welcomed Serbia’s commitment to heed a U.N. General Assembly appeal to open dialogue with its former province, even though Serbian President Boris Tadic on Tuesday reaffirmed his government’s refusal to recognize Kosovo.

Standing alongside Clinton at a press event, Kosovo’s Prime Minister Hashim Thaci said the ICJ opinion and the U.N. resolution should end any debate over his country’s political legitimacy. He added that Kosovo is ready to engage with Serbia on an equal footing. He is heard through an interpreter.

“We see a new chapter being opened now, a new phase being opened in our relationships between the state of Kosovo and Serbia,” he said. “The future chapter of cooperation between these two countries has been opened. It’s time to close the more that one century-long conflict between Serbia and Kosovo. The time is to cooperate and look toward the future.”

Clinton balanced her political support for Kosovo’s government with gestures toward the country’s ethnic-Serb minority, which has dwindled in recent years.

She went to the Serb enclave of Gracanica, outside of Pristina, and visited a 14th century Serbian Orthodox religious shrine, where the chief cleric complained to her that Kosovo is impeding the return of Serbs who had fled unrest in the country.

Clinton told a gathering of ethnic-Serb mayors in Gracanica that preservation of the cultural and religious heritage of all of the majority-Muslim country’s people is essential to Kosovo’s long-term stability.

“I believe the only way Kosovo will fully prosper is if Kosovo Serbs see a secure and peaceful future for themselves,” she said. “The United States strongly supports you – the Kosovo Serb mayors and other local leaders who are working to create that future.”

The Kosovo Serb mayors and other local leaders who are working to create that future.”

Clinton said she will press for full European integration for Balkan states in meetings in Brussels with EU foreign policy chief Catherine Ashton and at a meeting of NATO defense and foreign ministers.