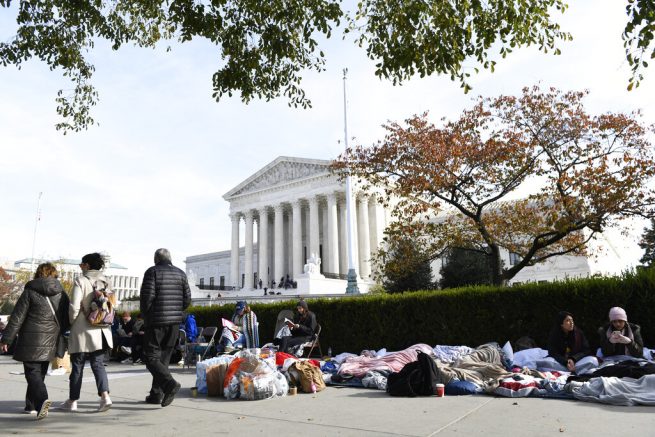 People wait in line outside the Supreme Court in Washington, Monday, Nov. 11, 2019, to be able to attend oral arguments in the case of President Trump’s decision to end the Obama-era, Deferred Action for Childhood Arrivals program (DACA). (AP Photo/Susan Walsh)

The Supreme Court is set to begin hearing arguments over the legality of the Deferred Actions for Childhood Arrivals or DACA program. The Obama administration enacted DACA via executive order in 2012. They called it a stop-gap measure to shield migrants brought to the U.S as children from deportation.

“This is not immunity. This is not a path to citizenship. It’s not a permanent fix. This is a temporary stop-gap measure that lets us focus our resources wisely while giving a degree of relief and hope to talented, driven, patriotic young people.”

The Trump administration moved to outlaw the program in 2017, but was forced to temporarily reinstate it after three lower courts argued it was terminated unlawfully. Though no new applicants can apply, the program remains in effect for those were already accepted over seven years later.

In June of 2019, the Supreme Court finally agreed to combine all three appeals cases into one ruling. Justices will be debating two questions: whether the government’s move to end DACA is something that lower courts can review at all and, if so, was the decision to end DACA legal? Should the court decide the administration acted lawfully, DACA recipients would likely be able maintain their protected status until their two year contract expires. After that, they would be subject to deportation.

“There will be 700,000 young people, who I think would be allowed to finish whatever their term on DACA is, but once their terms are finished, they won’t be allowed to renew. They’ll be subject to deportation. They won’t have work authorization.”

If DACA is struck down, President Trump has indicated he will allow Democrats to negotiate to maintain parts of the program likely in exchange for their support on his hardline immigration agenda.