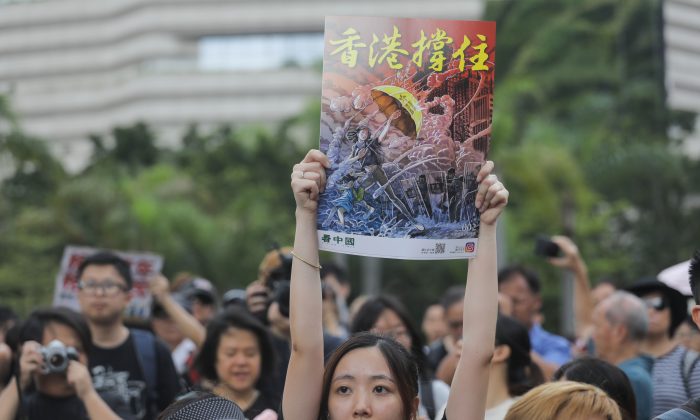 Protesters gather before a march to the West Kowloon railway station holding posters made by Canadian artist Daxiong Guo, during a demonstration against a proposed extradition bill in Hong Kong on July 7, 2019. (Vivek Prakash/AFP/Getty Images)
HK CURRENT AFFAIRS

The image has become an emblem of the Hong Kong  protests.

A young woman wielding a yellow umbrella shields a girl from a torrent of tear gas fired by riot police.

The Chinese words “Hong Kong Stand Strong” emblazoned at the top of the poster have become a rallying call for the city’s protesters, who are now months into large-scale demonstrations against an extradition bill that they see as another blow to the city’s autonomy.

Recent demonstrations has seen throngs of protestors, including popular cantopop singer Denise Ho, waving the poster and chanting its slogan, as they demand the full withdrawal of the bill.

Illustrated by award-winning Canada-based comic artist Guo Jingxiong, the image was Guo’s way to support the cause.

“As I watched them [Hong Kong protesters] marching on the street on television, I felt that they need something to hold in their hands, so I thought I will sketch something out for them,” Guo told The Epoch Times.

Guo, who also goes by Daxiong, has spent over two decades in the comics industry and is popular among Chinese and European comic fans. He owns his own studio called Flag Art in New York, and has illustrated for comics including Star Wars Adventures.

The mainland-China born comic said he felt a special connection to Hong Kong owing to the city’s special culture.

“I belong to the generation born following China’s Cultural Revolution, when virtually all aspects of tradition were extinguished in the mainland save the Chinese Communist Party’s culture of struggle,” Guo said.

Guo left China in 2008 just as Beijing escalated its crackdown on dissidents in the lead up to the Summer Olympics, and after some of his artworks expressing criticism of the Chinese Communist Party drew the ire of authorities.

Before flying to the United States on a special talent visa, Guo made a stop in Hong Kong, and recalled observing elements of China’s traditional culture—such as the spirit of brotherhood—in the residents’ habits and lifestyle.

Since then, the Chinese communist regime has stepped up its pressure on the city, Guo said.

“I think Hong Kongers today live a very compressed life with ever diminishing political space—even the Cantonese language is on the verge of being lost,” Guo said.

With Youth and Hope

Guo said the scale of the protests in Hong Kong is unheard of to people of his generation in the mainland.

“What Hong Kongers ask for is to protest the legal system and the integrity of the rule of law, and they are doing it the non-violent way,” he said.

As an artist, Guo felt compelled to produce works that stood on the side of the righteous.

“Seeing that they all held my work in hand and chanted the words inscribed on the poster, I felt that I was making an imperceptible impact on their ways of expression and their direction,” Guo said.

“It reminds me to be more prudent in my words and not bring them danger. The messages I deliver need to be even more positive.”

Guo said he chose to make youths the focus in his artworks because they represent a sense of hope.

“Adults are mature, but slick, glib, and shrewd,” he said. “Youth are full of spirit, they have ideals and the pursuit for the beauty of the world.”

Guo has dedicated five paintings for Hong Kong in the past month, with more to come.

In one of them, a girl wearing a white dress holds a purple tinged bauhinia flower—the emblem of Hong Kong—and a yellow umbrella. She looks at the fully geared riot police in front of her with a serene look. In the background is the message: Love My Hong Kong.

Guo said that the largely peaceful protests is a noble way for Hong Kongers to “counter lawlessness with principle.”

“The Chinese Communist Party as we know is rooted in violence, so no violence or lies of any kind in the world can be their match, but will only conform to their characteristics and merge with them,” Guo said.

He added that what the Chinese regime fears the most is the opposite of violence: truth, calmness and rationality.