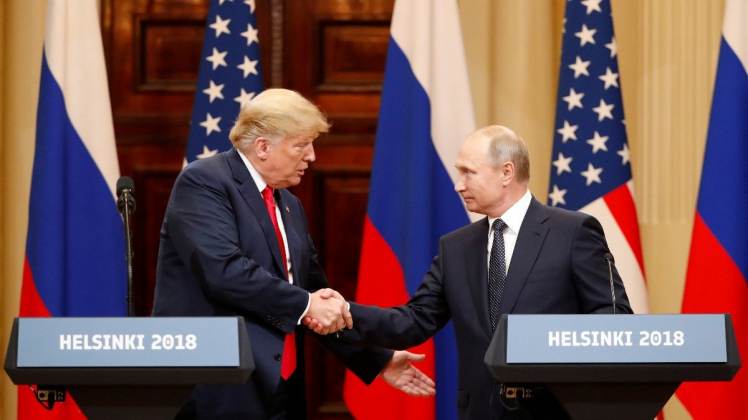 The high professional quality of Donald Trump and Vladimir Putin’s performance at their Monday press conference in Helsinki contrasts sharply with the obloquy by which the bipartisan U.S. ruling class showcases its willful incompetence.

Though I voted for Trump, I’ve never been a fan of his and I am not one now. But, having taught diplomacy for many years, I would choose the Trump-Putin press conference as an exemplar of how these things should be done. Both spoke with the frankness and specificity of serious business. This performance rates an A+.

Both presidents started with the basic truth.

Putin: The Cold War is ancient history. Nobody in Russia (putting himself in this category) wants that kind of enmity again. It is best for Russia, for America, and for everybody else if the two find areas of agreement or forbearance.

Trump: Relations between the globe’s major nuclear powers have never been this bad—especially since some Americans are exacerbating existing international differences for domestic partisan gain. For the sake of peace and adjustment of differences where those exist and adjustment is possible, Trump is willing to pay a political cost to improve those relations (if, indeed further enraging his enemies is a cost rather than a benefit).

In short, this was a classic statement of diplomatic positions and a drawing of spheres of influence.

Flexibility and Inflexibility
As Putin listed his agenda, he showed that today’s Russia is a status quo power, whose primary objective is stability. Having come to power over a country diminished and dispirited, he sought to recover as much as possible of what Russia had lost in the Soviet break-up. He forcibly took back parts of Georgia and Ukraine. In doing so, he pushed against open doors.

Today, no other doors are open. Now being ahead, he wants to stop the game. He knows that this is possible because nobody is going to wage or even risk war against Russia to try disgorging Abkhazia and Crimea. He wants Trump to acknowledge that. Warning against extending NATO to Ukraine and Georgia, he signaled that all else is negotiable.

He also has rebuilt Russia’s military and wants to protect its edge by persuading Trump to keep U.S. missile defense in its current dysfunctional mode. This is an inflexible demand that deserves an equally inflexible rejection. Trump had already delivered it by ordering the establishment of the U.S. Space Force.

By securing his naval and air bases in Syria, Putin succeeded in returning Russia to warm-water sea power. That required backing the Shia side in its intra-Muslim war against the Sunni in Syria, while the United States backed the other side. Today Iran, Syria, Iraq, and Turkey are much as Putin wants them. He wants Trump’s acknowledgment of this status. Russia continues to argue to Americans that both countries have suffered far more from Sunni terrorism—ISIS and the Muslim Brotherhood—than from the Shia version.

No Desire for War over Israel, Eastern Europe
The two made clear that their commitment to stability in the Middle East outweighs support for either side, and signaled wider cooperation, especially with on military matters.

Trump, leaving no doubt that America’s commitment to Israel’s security is absolute, faced Putin with the choice of partnering with America in restraining Iran or of being drawn into an Israeli-American war against an Iran with whose forces Russia’s are interwoven. Putin, for his part, seemed to concur with Trump’s priority. That along tripartite security consultations with Israel is likely to cool Iran and Hezbollah’s ardor for war.

Trump signaled that America’s interest in Eastern Europe lies in re-establishing peace there, and in safeguarding the independence of its states. Poland and the Baltic States are not just NATO members, but also close to the American people’s hearts. By stressing peace, he made clear that America does not intend to make its defensive commitments there the occasion for a war at or beyond the extreme reach of American power.

Collusion and the Known Facts
Though Russia has backed North Korea in the past, Putin signaled that he is not happy with its acquisition of a modern nuclear force that is effectively China’s pawn. He seemed to promise pressure on North Korea to denuclearize—something that would displease China. Though that was a minor part of both sides’ press conference, it may well signal both sides’ recognition of their mutual interest in not letting China become the Western Pacific’s overlord. Such an understanding would be no minor achievement.

The American ruling class’s attribution of the 2016 election to Trump-Putin collusion, which has characterized U.S.-Russia relations for two years, provided the press conference’s fireworks. Both denied any such thing and insisted there was no evidence of it. In response to a question about whether Putin would make available the 12 Russian state intelligence employees indicted for interference in that election to Special Counsel Robert Mueller, Putin pointed to the existence of a treaty of cooperation on criminal matters and promised Mueller that access to the accused through the treaty.

This led to the final flourish. The Associated Press reporter demanded that Trump state whether he believes the opinions of U.S. intelligence leaders or those of Putin. It would be healthy for America were it to digest Trump’s answer: The truth about the charge that Russia stole the contents of the Democratic National Committee’s computer server is not to be found in the opinions of any persons whatever. The truth can be discovered only by examining the server in question—assuming it has not been tampered with since the alleged event. But, said Trump emphatically, those making the accusations against Russia have refused to let the server be examined by U.S. intelligence or by any independent experts. What is the point of accusations coupled with refusal of access to the facts of the matter?

The classic texts of diplomatic practice teach that diplomacy advances the cause of peace and order only to the extent that its practitioners avoid contentious opinions and stick to demonstrable facts.

The AP reporter, who should be ashamed, is beyond shame. Then again, so are the ruling class representatives who have redoubled their animus against Trump. Cheap partisanship is not all that harmful. It is the transfer of domestic partisan animus to international affairs, however, that has the potential to start wars.

Not so long ago, American school kids had to read George Washington’s farewell address, which warned in the most emphatic terms at his command to avoid that sort of thing for the sake of peace with other nations as well as among ourselves.

What that ignorant “journalist” was demanding of Trump—precisely what the credentialed experts should know better than to have demanded—was that the president of the United States scream at the president of Russia for all his evils. Competitive “virtue signaling” has become the way of political life in America. To the extent that it bleeds into America’s foreign policy, we are all in big trouble.

Content created by the Center for American Greatness, Inc. is available without charge to any eligible news publisher that can provide a significant audience. For licensing opportunities for our original content, please contact licensing@centerforamericangreatness.com.

About the Author: Angelo Codevilla

Angelo M. Codevilla is a senior fellow of the Claremont Institute, professor emeritus of international relations at Boston University and the author of To Make And Keep Peace (Hoover Institution Press, 2014).